Poll: Evangelicals (and Everyone Else) Want Wealthy to Pay Fair Share of Taxes

Just before Christmas, Congress decided to delay major changes to income taxes. Instead, legislators gave themselves more time to negotiate by extending this year's payroll tax cuts through February. The payroll tax debate will be at the top of the agenda in 2012, but even supporters of an extended payroll tax cut know it is temporary.

Instead, most Americans prefer a more dramatic overhaul of the tax system, according to a recent poll by the Pew Research Center for the People & the Press. And unlike many other political issues, the poll shows few differences between religious groups: Most people of all faiths feel taxes are unfair and that the wealthy need to pay more. 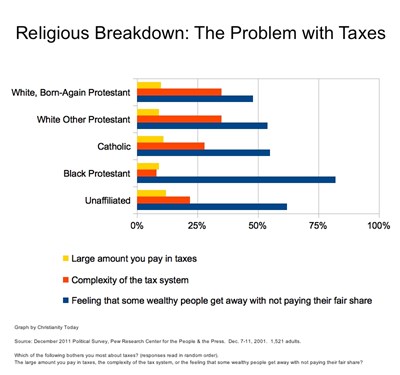 A majority (54 percent) said the federal tax system was either "not too fair" or "not at all fair" in Pew's December survey, a number up from 48 percent in 2003. Also up: the percentage who say the problem with the system is that some of the wealthy do not pay their fair share. The poll found that six out of ten believe Congress needs to completely change the system.

There were some differences in opinion over what the problem was in the tax system, but much of these differences were due to race and income, not religion. Among all religious groups, most people said the problem with the tax system is that "some wealthy people get away with not paying their fair share." However, this view is more prominent among Christians in historically African-American churches. 82 percent of black Protestants said this was the problem, compared to around half of white Protestants and Catholics.

About one-third of white Protestants and Catholics said they were bothered by the complexity of the tax system; one fifth of those unaffiliated with a religion said the same thing. Black Protestants, however, were much less likely to say the tax system was the problem (just eight percent).

The Pew survey suggests that there are major divisions among Republicans on the issue of taxes. Among Republicans who agree with the Tea Party, only 22 percent say the wealthy need to pay their fair share while 57 percent said the problem was the complexity of the tax system. Those in the GOP who disagree with the Tea Party, however, held a different view, with most saying the wealthy do not pay their fair share.

Editor's Note: The Pew Research Center for People and the Press (Pew) provided Christianity Today with a religious breakdown of questions from the Dec. 7-11 survey of 1,521 Americans on their views of the federal tax system. However, CT is responsible for all analysis and interpretation of the results. Pew identifies evangelicals as white, non-Hispanic Protestants who described themselves as "born-again or evangelical." Around 18 percent of Americans are evangelicals by this definition. The margin of error for this subsample is around seven percentage points. The results are descriptive; religious differences could be due to partisanship, ideology, income, or other factors.

Poll: Evangelicals (and Everyone Else) Want Wealthy to Pay Fair Share of Taxes

Poll: Evangelicals (and Everyone Else) Want ...