In Singapore, LGBT Perspectives Are Liberalizing. Can the Church Hold Together?

Evangelicals are eager to preserve their unity—and the country’s.
Isabel Ong|September 8, 2022 12:00 PM 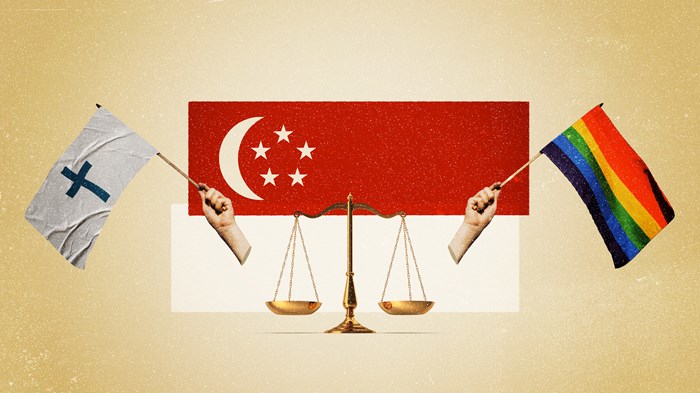 Singapore has decriminalized gay sex while pledging to add a constitutional amendment to protect the definition of marriage as between one man and one woman.

The country’s evangelical leaders broadly opposed the government’s decision to repeal Section 377A of the penal code and supported the proposed amendment. Though there are currently only mild discrepancies over strategies of engaging the government and the LGBT and same-sex-attracted community, they know the church is susceptible to division.

“There is understandable uncertainty and anxiety as we await the unfolding of a new social compact regarding marriage, family, and society involving citizens, the executive, and our law courts,” wrote pastor Christopher Chia in a letter to Adam Road Presbyterian Church. “What can we do on this journey? How can we watch and pray wisely, humbly and patiently? Do not allow S377A and sexuality to be the single issue that defines and divides us.”

Until prime minister Lee Hsien Loong’s announcement last month, sex between two men was technically punishable by up to two years in prison.

The National Council of Churches of Singapore (NCCS) praised the previous arrangement in which 377A existed but was not enforced. The Alliance of Pentecostal & Charismatic Churches of Singapore (APCCS) argued that the decision “signals a rewriting of acceptable sexual relationships, and celebrates homosexuality as being characteristic of a mainstream social environment.”

“There’s a profound fundamental agreement in terms of theological response. It’s the mode of engagement with government agencies that may differ,” said Keith Lai, former president of the NCCS. “We value this diversity of approaches while maintaining unity of spirit and heart.”

Evangelical denominations and institutions have been consistent: They did not want Section 377A to be repealed. If the government does repeal it, it should be done only when safeguards on marriage are put in place, says APCCS chairperson Yang Tuck Yoong.

“Then you have people who are more middle-of-the-road: Singapore is a secular society, so if the government is not enforcing 377A and decides to remove it, what’s the problem?” said Yang.

Some Christians have also seen 377A as hurting the church’s witness. In 2019, in a Facebook post generating nearly 600 comments, lawyer Jordan Tan said he was “completely at peace” with his role in advocating the constitutional challenge against Section 377A in the Singapore court and argued that his faith “required” him to do so.

The law prevents Christians and the LGBT community from communicating well and forming relationships, he wrote.

But at the local church level, leaders saw more differences in opinion around the repeal.

News about the penal code change last month spread like wildfire on Whatsapp, which led to “an uncomfortable amount of disagreement” among Singaporean Christians, said Jenni Ho-Huan.

Ho-Huan, a pastoral leadership consultant, contrasted the responses from ministry leaders who engage the government and local pastors who focus on their own congregations and communities.

“As an Asian society, we view the government as an ‘older brother’ and authority figure,” she said. To that end, Christians in Singapore typically leave interactions with the government to leaders of Christian networks.

“We have a high level of trust in our leaders [as well as] a passive citizenry,” Ho-Huan said. “Affecting the politics of the nation is very new to us.”

Instead, most of the way the church has previously engaged LGBT issues has been through personal relationships.

Prior to the repeal, local think tank ETHOS Institute™ for Public Christianity held a series of focus groups with people who experience same-sex attraction. Some stories from these gatherings were published in the 2018 book Good News for Bruised Reeds—Walking with Same-Sex Attracted Friends.

That same year, 3:16 Church, an APCCS congregation, founded True Love Is. The online ministry showcases stories of Christians who have turned away from same-sex attraction and experienced the restoration of their marriages and relationships.

More recently, the Methodist Church in Singapore, an evangelical liturgical denomination, has held workshops at its oldest and largest congregation, Wesley Methodist.

Young adults gather to discuss how believers may “welcome and provide a safe space for those wrestling with same-sex attraction in the church,” said bishop Gordon Wong, who also serves as an advisor to the Fellowship of Evangelical Students. “Many are keen to know practical handles on how to relate to friends, colleagues, and family members who have different views on this matter.”

Lai’s church, Covenant Presbyterian, has been inviting pastors and Christian leaders “at the frontlines” to speak at Sunday services and postlunch dialogue sessions. These speakers include activist Jason Wong, who organized against the repeal of 377A, and 3:16 Church’s senior pastor Ian Toh.

On average, 50 to 80 people have attended these events, which Lai says have left the congregation concluding that “we can’t come up with simplistic or naive answers” for people who experience same-sex attraction.

Methodist churches, meanwhile, agreed with NCCS’s statement and called upon its members to pursue a biblical vision of human flourishing that seeks the common good and demonstrates love for one’s neighbors, Christian or not.

“There’s a difference between sitting on the fence and holding the tension between the so-called factions,” she said.

Though sex work is legal and transgender people are recognized in the country, they regularly face systemic discrimination and experience social stigma. Liu’s focus is not on changing regulations but on offering care and showing hospitality to people whose work is often regarded as taboo.

Kimhong Hazra, one of Liu’s mentors and an adjunct lecturer in mission studies at a local Bible school, says Liu occupies a unique position between the church and the transgender community: “She straddles both kinds of worlds in the hopes that both worlds can heal each other.”

To prohibit or proscribe?

The Singapore government’s plan to amend the Constitution to protect the definition of marriage against legal challenges would specifically “protect Parliament’s right to define marriage.” This falls short of demands from groups like the APCCS and the Evangelical Alliance of Singapore, as well as the Christian and Muslim organizers of Protect Singapore Townhall, who recently drew 1,200 people advocating against the penal code change.

Enshrining the definition of marriage in the Constitution as between one man and one woman means that it would require a supermajority to change its definition, explained Yang. By not doing so and protecting marriage only in the Women’s Charter, an ordinary law that sits below the Constitution, the definition of marriage could be amended with a simple majority vote. In Yang’s view, this would make it more vulnerable to change as LGBT activists push the boundaries and advocate for same-sex marriage.

Wong, the Methodist bishop, said that while safeguarding marriage through legislation is important, it is not the church’s ultimate priority.

“The church must, and will, always support marriages and families. But if the church places these above all else, or prioritizes political action or influencing legislation as our highest priority, then we would have missed the point of the two greatest commandments Jesus taught: Love God and love our neighbor.”

Because Christian marriages “are also falling apart,” the church needs to give “more robust explanations” for why marriage is meant to solely be between a man and woman and then proclaim this message to both Christians and society at large, says Ho-Huan.

“If you reduce its definition to the notion that marriage is intended for personal happiness, you will miss out on God’s heart for it,” she said. “Christian marriage is a sign of the kingdom of God.”

This February, the country’s Court of Appeal ruled that while the statute would remain, it would be “unenforceable.” A month later, the government launched a public survey that gathered opinions on whether Section 377A should be repealed, modified, or retained. It received over 30,000 responses—a staggering number compared to the few hundred or thousand responses that such questionnaires usually get.

More recent surveys conducted in June and August showed an increasing acceptance toward same-sex relationships in Singapore, with 43 percent of citizens aged 18 years old and up saying they supported the repeal.

LGBT issues have fractured global denominations like the United Methodist Church and the Anglican Communion. But the Singapore story may develop differently.

Christian unity is a gift from God and something the church is to safeguard and uphold amid a culture of radical individualism, says Ho-Huan.

“At heart, this is about anthropology, and then ecclesiology,” she said. “We have a clear position on these as a church. They may need to be freshly articulated and agreed upon anew. This is a good exercise to mature the church.”

It’s the government’s job to look after the social harmony of a diverse group of people, says Lai.

“Why do we expect a secular government to adopt Christian moral values?” he said. “It’s an unrealistic expectation. We set ourselves up for disappointment when we have that expectation.”

In Singapore, LGBT Perspectives Are Liberalizing. Can the Church Hold Together?

In Singapore, LGBT Perspectives Are Liberalizing. ...