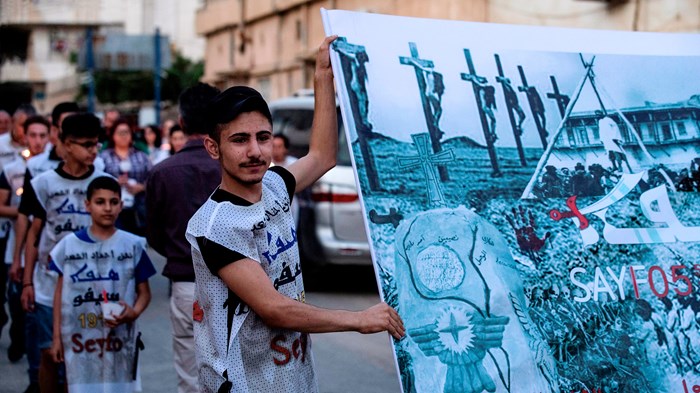 Image: Delil Souleiman / Getty
Members of Syria's Syriac Christian minority attend a ceremony to mark the mass killing of the Assyrian civilian population more than a century ago.

In the waning days of the Ottoman Empire, evangelicals laid down their lives for their Lord. Living in Nusaybin, once home to the ancient theological school of Nisibis, they were among the firstfruits of the Sayfo (“sword”) martyrs.

Overall, modern estimates posit half a million deaths of Syriac-Aramean Christians at the hands of Turkish and Kurdish soldiers, concurrent with the Armenian genocide that claimed 1.5 million lives. Today this Christian community, still speaking the language of Jesus, seeks its own recognition.

In June 1915, the Muslim-majority city—now located on Turkey’s southeastern border with Syria—had about 100 Syrian Orthodox families, and an equal number belonging to other Christian sects. The Protestants were rounded up with Armenians and Chaldeans, marched to the front of town, and shot dead.

The Orthodox families were promised peace by the local leader, but 30 men fled and sought refuge in the rugged mountains. A monk, trusting authorities, led soldiers to their hideout seeking to reassure the frightened band.

According to reports, along the way they turned on the monk, demanding he convert to Islam. Upon his refusal, they cut off his hands, then feet, then head. Returning to Nusaybin, the soldiers assembled the remaining Christians, leading them out of town. In joyful procession the believers sang hymns of encouragement: Soon we will be with our Lord Jesus Christ.

Refusing conversion, one by one they were shot, and then dumped in a well.

In 1919, then-Syrian Orthodox Archbishop Aphrem Barsaum filed a report to the prime minister of Britain, after the Allied powers displaced the Ottomans. Similar massacres had been repeated in 335 other villages in the archbishop’s jurisdiction, killing 90,313 Christians and destroying 162 churches. Collecting other reports, delegates to the Paris Peace Conference following World War II tallied 250,000 deaths.

“It is unjust when they speak only of the Armenian Genocide,” said Archbishop Joseph Bali, secretary to Syriac Orthodox patriarch Mor Ignatius Aphrem II. “We also need to be vocal about our people.”

Fueled by a substantial diaspora, the Armenian tragedy has been recognized as a genocide by 33 nations. The US resolution, passed by Congress in 2019, listed additionally Greek, Assyrian, Chaldean, Syriac, Aramean, Maronite, and other Christian victims.

Greeks are also among those seeking individual recognition.

The situation with the others is complicated by name. Divided into three sects—Syriac Orthodox, Chaldean Catholic, and the Assyrian Church of the East—portions of the community prioritize different terminology.

Chaldean patriarch Louis Sako has stated the theological differences are not substantial, but each body represents a distinct tradition. His church, based in Baghdad, is aligned with the Vatican, while the Syriacs, based in Damascus and most populous in India, are within the non-Chalcedonian Oriental Orthodox family. The independent Assyrians are heir to the ancient Nestorian church.

“I see nothing to prevent [our] union,” said Sako last month. “What unites us is much greater than what divides us.”

This would include the genocide—but advocacy was slow to develop. Scattered across remote mountain villages, Syriac-Aramaic farmers were less cosmopolitan than the integrated Armenians. Violence began in the 1840s, killing thousands. Another massacre followed in 1895, and the Young Turk revolution of 1908 led to further displacement.

As the Ottomans lost territory in the Balkans in 1913, Muslim refugees streamed to the empire, which resettled them in Christian areas. And following the empire’s dissolution after the Great War, the 1923 Lausanne Conference established the current borders of Turkey and Greece, leading to further transfer of Muslim and Christian populations.

But by then, local Christians, indigenous for centuries, had been subjected to death marches, with survivors fleeing to Syria. The Armenians were awarded a nation-state in the Caucasus, but the Syriac-Aramaic people had no country of their own.

Both communities integrated into the religious diversity of the Levant. But Habib Ephrem, president of the Syriac League in Lebanon, said that the traumatized families hardly wanted to speak of Sayfo among themselves, let alone to the outside world.

“Our people were late to begin a political effort to recognize what happened to them,” he said. “We had no PR or international relations.”

Ephrem’s grandfather came to Lebanon in 1917, but eventually many compatriots relocated to Europe, particularly to Sweden. He has been advocating for genocide recognition the past 15 years, rewarded in 2007 when the International Association of Genocide Scholars (IAGS) judged that both the Assyrians and Greeks deserved separate status.

It called on the Turkish government to issue a formal apology.

As with the Armenian Genocide, Ankara denies any formal policy to exterminate a people. Seeking an audience, Ephrem traveled to Istanbul University in 2006 and quoted a Turkish poet: Separating a person from his land is like ripping his heart out of his chest.

“My grandfather did not come for tourism,” he said. “We were uprooted, just because we were there.”

Despite failures in Turkey, since the IAGS decision genocide advocacy has gained steam. Sweden (2010), Armenia (2013), the Netherlands (2015), Germany (2016), and Syria (2020) have all officially recognized the Syriac-Aramaic plight.

Ephrem has lobbied in the US as a regular attendee of the National Prayer Breakfast. But his primary concern lies elsewhere—in the stability of Middle East Christian communities. In 2015, ISIS overran 33 villages in Syria’s Khabour River valley, and today less than 400 people remain, he said. The economic crisis is driving emigration from Lebanon, and he fears his people will eventually dissolve into the European mosaic.

It is right to recognize the genocide, but the stakes are greater than memory.

“Is it better to forget and live as a citizen in Sweden, or to weep and cry?” Ephrem asked. “If you don’t have a future in your homeland, who are you?”

That question, said Theodora Issa, must be answered by faith and forgiveness.

“The responsibility falls to the church and the faithful,” said the Australian academic and daughter of an archpriest in the Syriac Orthodox Church of Antioch, originally from Iraq’s Nineveh Plains region. “Speaking about Sayfo will help our people cling to their identity.”

Issa bears a double burden—her mother’s family fled the Turks; a century later, her father’s family fled from ISIS. Her activism includes publishing books, participating in conferences, and representing her denomination in the central committee of the World Council of Churches (WCC).

Last month, the general assembly voted to not only recognize the Syriac-Aramaic genocide as “distinct and separate” from the Armenian tragedy—recognized by the WCC nine years earlier—but also to work for its greater awareness among all member churches.

“We acknowledge that these tragic events occurred,” read the official WCC resolution, “and that they must be named by their right name.”

If it was simply called the “Christian Genocide” from the beginning, said Issa, things might have been different. As it is, the standard designation has overshadowed the suffering of Sayfo’s diverse Syriac-speaking communities.

“Turkic-Ottoman leadership was not concerned whether a Christian was of Armenian, Greek, or Assyrian descent,” said the regional director for the World Evangelical Alliance’s Peace and Reconciliation Network, an ethnic Armenian. “And in the face of outright genocide denial on the part of the Turkish government today, it is vital that the atrocities perpetrated against the Syriac-Aramaic people be recognized in its own right, rather than a footnote in the broader Armenian Genocide.”

Without denying the massacres, other Armenians say that Sayfo lacked the clear political agenda that marked the eradication of Armenians. As such, it does not meet the standard of official “genocide.”

Armenians commemorate April 24 as the beginning of the 1915 genocide. To distinguish, Bali stated that his church’s Holy Synod designated June 15 instead. It marks the approximate date two bishops were killed in the monastery-laden region of Tur Abdin, which translates to “mountain of the servants of God.”

And since their capture in Syria in 2013, two Syrian-born Orthodox bishops remain missing today. Sayfo, its denial, and continued atrocities against the community can lead many to animosity.

“For me, as a Christian, it is an outrage to hear how members of my community, especially the elder among them, indiscriminately curse Kurds and Turks as people that one just cannot trust,” wrote Amill Gorgis, publisher of The Persecution and Extermination in Tur Abdin, 1915, which relates the evangelical story from Nusaybin above. “Why are we like this? Are we not used to learning and hearing the texts from the gospel where it says: Love your enemies, and pray for those that persecute you?”

The compendium, he wrote, is an effort to understand the source of this pain.

Many sources emphasized that Sayfo is not about revenge. Tens of thousands of Syriac-Aramaic people live in Turkey today in relative peace, while the Assyrian Church of the East is returning its patriarchal headquarters to Iraqi Kurdistan.

Sayfo can never bring our ancestors back, said Bali. And it is not about reconciliation, for the original killers cannot be identified. At stake is the truth, and a gaping wound.

Jesus healed the bleeding woman, he said. But before the miracle, he asked for her story, and let her speak about her pain. The same is necessary for Syriac-Aramaic peoples today—in recognition of their genocide.

“We as Christians have to forgive, for the sake of our healing,” said Bali. “It is not true forgiveness, if we just keep it inside.”