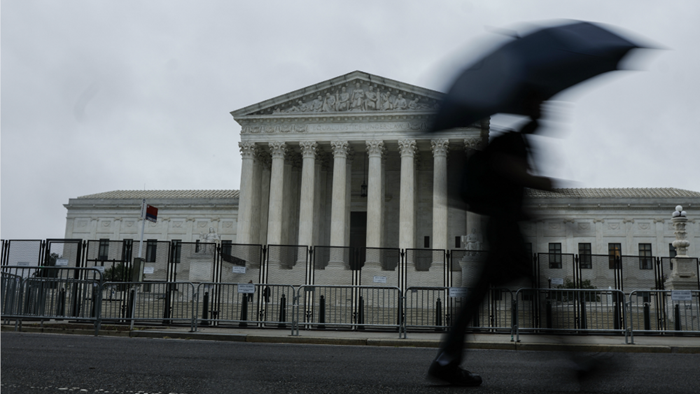 The late D. James Kennedy’s television and radio ministry cannot sue for defamation over being called an anti-LGBT hate group.

The Supreme Court’s summary disposition was handed down Monday without explanation. The only dissent came from Justice Clarence Thomas. He argued the court should overturn the guiding 1964 precedent, New York Times Company v. Sullivan, which says media companies are only liable for libel against public figures when they publish false information with reckless disregard for the truth and “actual malice.”

“Coral Ridge now asks us to reconsider the ‘actual malice’ standard,” Thomas wrote. “As I have said previously, ‘we should.’”

Donald Trump also pushed for a reevaluation of New York Times v. Sullivan when he was president, calling the legal standards for libel “a sham” and “a disgrace” to America.

“We are going to take a strong look at our country’s libel laws, so that when somebody says something that is false and defamatory about someone, that person will have meaningful recourse in our courts,” Trump said in 2018.

According to Coral Ridge Ministries’ lawyer David C. Gibbs III, the “actual malice” standard is “a more-often-than-not insurmountable bar for a public figure to plead and prove a defamation claim.” He argued it should only apply to elected officials, not “private public figures,” or be disregarded entirely.

“Instead of the shield it was designed to be,” Gibbs wrote, “it is now a sword used to bludgeon public figures with impunity.”

Coral Ridge Ministries, also known as D. James Kennedy Ministries, first sued SPLC for defamation in 2017. The television ministry grew out of the megachurch Kennedy founded in Fort Lauderdale, Florida, and has continued broadcasting since Kennedy’s death in 2007. The ministry currently spends about $1.4 million on airtime, tax records show.

SPLC, a civil rights group that specializes in tracking and reporting on extremist organizations, included the Christian television ministry on an interactive map of hate groups. Local and national media turned to SPLC and used its map after a white supremacist rally in Charlottesville, Virginia, brought attention to the wide range of active extremist organizations in America.

Florida media reported that Coral Ridge Ministries was the No. 1 active hate group in the state, and CNN broadcast a map of “all the active hate groups where you live,” which included the television ministry.

Several other conservative Christian groups also protested SPLC’s broad definition of hate group. The Family Research Council said SPLC was “inciting hatred against Christians, which has already led to violence.” In 2012, a gay rights activist went to the lobbying group’s headquarters with a 9 mm pistol, a box of ammunition, and 15 Chick-fil-A sandwiches, intending to kill people. He was convicted of terrorism and sentenced to 25 years in prison.

Secular organizations continued to rely on the SPLC list, though. Amazon decided to use it in 2017 to determine which nonprofits would be eligible to receive donations through its AmazonSmile program.

In court, Coral Ridge Ministries said it wasn’t wrong to say it was “anti-LGBT,” since the ministry condemned homosexual sex as sin. Kennedy and others in the ministry taught that same-sex intimacy was “an abomination,” “vile,” and “shameful.” The ministry’s attorneys said it was not a hate group, though, because it did not promote violence against LGBT people.

SPLC countered that Kennedy and his ministry promoted Christian Reconstructionists R. J. Rushdoony, who said that sexually active gay people should be stoned to death, and Gary DeMar, who said that a biblical government would only have to execute a few gay people to drive “the perversion of homosexuality underground, back into the closet.”

Judge Myron H. Thompson found, however, that there wasn’t a single, established definition of “hate group.” Some only use the term when a group promotes violence. Others, including the FBI, say a hate group is any organization that promotes “animosity, hostility, and malice against persons of or with a race, religion, disability, sexual orientation, ethnicity, gender, or gender identity which differs from that of the members.”

Thompson decided it was at least plausible to call Coral Ridge Ministries a hate group, and it would be “anathema to the First Amendment” to let the defamation suit go forward.

“If Coral Ridge disagrees with the ‘hate group’ designation, its hope for a remedy lies in the ‘marketplace of ideas,’ not a defamation action,” the judge wrote in 2019.

Besides that, Thompson said, Coral Ridge Ministries could not “plausibly allege actual malice.” The television ministry’s lawyers didn’t have any evidence to show that SPLC knew the “hate group” designation was false and used it anyway to hurt Coral Ridge Ministries. There was no evidence submitted to show the civil rights nonprofit wasn’t acting in good faith.

According to Judge Charles R. Wilson, the ministry was simply asserting malice, but not putting any meat on the “bare-bones allegations.”

An attorney for National Religious Broadcasters, an association of evangelical media companies, argued that the 1964 decision has lowered the standards of journalism and encouraged too much reckless reporting.

“The number of falsehoods has exploded” since New York Times v. Sullivan, Matthew J. Conigliaro wrote, and it is partly the Supreme Court’s fault.

The conservative Christian groups could only get support from one justice, however. None of the other eight signed on to Thomas’s dissent, and five years after the legal battles began, Coral Ridge Ministries was left without a legal way to fight the claims that it is a hate group.