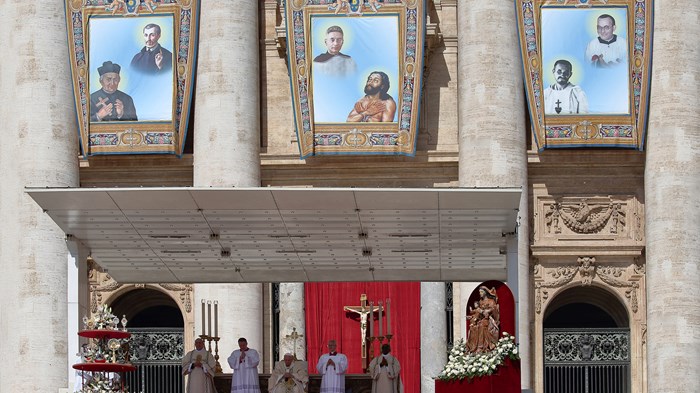 An 18th-century Indian Christian who devoted his life to speaking out against the caste system has become the country’s first layperson saint. In May, Pope Francis canonized Devasahayam, a convert from upper-caste Hinduism to Christianity and India’s first lay martyr.

“The declaration has brought joy to all of us here for a long-awaited and well-deserved recognition to an ordinary person, who exhibited the value of equality for all people,” said Finny Philip, the principal of the Filadelfia Bible College in Udaipur, Rajasthan.

This month, two dioceses in Tamil Nadu—Devasahayam’s home state—organized a thanksgiving Mass held near the foothills of Kattadimalai where his body was discarded after his execution. Hundreds of thousands of Catholics gathered in person (or watched via livestream) for the subsequent four-hour celebration, which included a dance drama depicting the life of the beloved saint.

“The witness and the way St. Devasahayam has inspired our people through decades gives us much hope, especially when freedom of religion is coming under increasing threats in the country,” Bishop Nazarene Soosai of Kotar told the National Catholic Register.

Devasahayam’s road to sainthood began in 2004 when Indian Catholic leaders first recommended his name for the process of beatification. In 2012, Pope Benedict XVI gave him the title “venerable.” Later that year, his beatification was announced, and in 2013, the church began considering him for sainthood after a woman came forward to credit him with a miracle.

“The canonization of Devasahayam becomes important because it is a layperson who has been canonized,” said John Dayal, a spokesperson for the All-India Catholic Union. “In India, while the clergy have been accused of spreading the word of Christ and promoting conversion, the actual witness to the life and message of Christ is by laypeople who live in the community, who by their lifestyle live out evangelization. Devasahayam’s canonization recognizes the tremendous role of ordinary Christians in India, who give witness through their lives daily.”

‘No one forced me to come’

Devasahayam was born as Neelakandan Pillai, into a high-caste Hindu family, on April 23, 1712. He grew up in India’s southernmost state in the village of Nattalam, or what is present-day Kanyakumari district, and served in the court of the Hindu King Marthanda Varma of Travancore.

While serving at the court, he befriended a Dutch naval officer also working for the king, Eustachius Benedictus de Lannoy. As Neelakandan narrated, he wondered whether the gods were angry with him because of the losses he had incurred—especially the death of several prize bulls—to the Roman Catholic man. Lannoy encouraged him by sharing the story of Job from the Bible and explaining that God tests the faith of good people through suffering. This testimony inspired Neelakandan to embrace Christianity, and in 1745 he was baptized. He took the name Devasahayam, which in the local Tamil language means “God is my help” and is a translation of the name Lazarus.

But Devasahayam did not stop there. Next, he dropped “Pillai,” his surname that identified him as a high caste, “to get rid of the obligations of caste attached to him,” said John Kulandai, a priest who helped with the canonization process.

These obligations meant that those in a high caste could not associate with any low-caste people or Dalits. But, inspired by his Christian faith, Devasahayam became an anti-caste crusader who after his conversion began to see all human beings as equal. He frequently spoke out against superstitions that justified demeaning behavior toward lower castes. He was also said to have invited the Dalits—the untouchables—to sit in a row with other people and served them food with his own hands.

Devasahayam’s conversion and subsequent ministry as a lay leader in the Roman Catholic Church invited the ire of high-caste Hindu leaders in the community as well as the members of the royal family. While his own household accepted his Christian faith as their own, the king believed Devasahayam might spread his religion so widely it might overrun his own. Devasahayam’s mingling with people of all castes and classes and eating with people so far socially beneath him led to him being falsely accused of promoting conversions to Christianity. Several Brahmin leaders falsely accused him of treason, contempt for religious practices, and insulting the gods, brahmins, and the king.

By the time of Devasahayam’s conversion, Jesuit missions had been active in India for more than 200 years. (William Carey would not arrive until the end of the 18th century.) Few looked upon them favorably.

“No one forced me to come; I came by my own free will. I know my heart: He is my God. I have decided to follow Him and will do so my whole life,” Devasahayam is later credited as saying.

In 1749, facing pressure from elites, the king ordered Devasthanam’s arrest. During his three years in prison, his captors frequently tortured him in an unsuccessful effort to force him to recant his faith. At the age of 39, Devasahayam was executed by a firing squad, and his body was left to be eaten by wild animals. When people discovered his remains several days after his death, they buried him in front of the main altar of the Church of St. Francis Xavier, which is now the Cathedral of the diocese of Kottar.

“Devasahayam was a well-respected man in his times. He respected the king and other religions. He was not killed just because he was a convert to Christianity. No, not at all!” said Kulandai. “He was killed because he fought against the caste system as well. After becoming a Christian, he understood and practiced the fact that God has created all people equally—there are no high, no low, no superior, no inferior. If Devasahayam was a Dalit convert, probably nobody would have even bothered to notice.”

Opposition to the canonization

Numerous right-wing Hindu groups have met news of Devasahayam’s canonization with outrage, frustrated with seeing a convert venerated and divided over how to discuss his stance on caste issues. Their solution: denigrating Devasahayam as a traitor who was killed for treason.

On Twitter, Swarajya magazine, a right-wing magazine, and the Organiser, an official RSS outlet, alleged that Devasahayam’s martyr was “a hoax.” The Organiser attempted to connect the canonization to an opposition party alleging that its party leaders were promoting conversion in Tamil Nadu.

A local chapter of the prominent Hindutva group, Vishva Hindu Parishad (VHP), said that it “vehemently” opposed the decision of canonizing Devasahayam.

“The main reasons for conferring him Sainthood would be to help the growth of Christianity in southern Tamil Nadu, Kerala, and parts of Sri Lanka,” said Sthanumalayan, the national joint secretary of VHP, in a statement. “This is … an attempt to make a fake Devasahayam, as a saint, to distort history. The Vatican move would encourage conversion.”

It’s not surprising that Devasahayam’s conversion has stirred up controversy, given that the concept of conversion has increasingly been used by Hindu right-wing groups as tool to foment hatred toward minorities, says Vinay Samuel, the founder of the Oxford Center for Mission Studies.

“Hinduism encourages search, so the question is about the choice of the individual,” he said. “Devasahayam, like so many in India, was convinced that here is a faith that he could die for. To reduce that conviction to a narrative of forced conversion or conversion by fraud is not good.”

Christian leaders believe that Devasahayam’s life and martyrdom left a legacy for the Indian church to emulate.

“He will bring great strength and encouragement to those who undergo suffering now,” said Finny Philip, Principal of Filadelfia Bible College, Udaipur, Rajasthan.

Soosai, the Bishop of the Kottar diocese, hailed Devasahayam as a “saint of our times” who has shown us “how we can be better followers of Christ.”

But Devasahayam’s ministry should also challenge Christians that there’s still work to be done, especially in addressing the lingering injustices of the caste system both outside the Church and within, where caste remains an issue, especially in south India.

“It is important to remember that almost 300 years ago this man fought against casteism and discrimination,” said Catholic leader M. G. Devasahayam. “Today we are still living in that reality. We must take inspiration from him.

“A change must come if the sacrifice and sainthood of Devasahayam is to bridge the three centuries of caste and communal divide that is plaguing the country,” he said.