Christian group works with conservationists in Chad to help antelope on the brink of extinction.
Ryan Truscott|July 14, 2022 06:00 AM 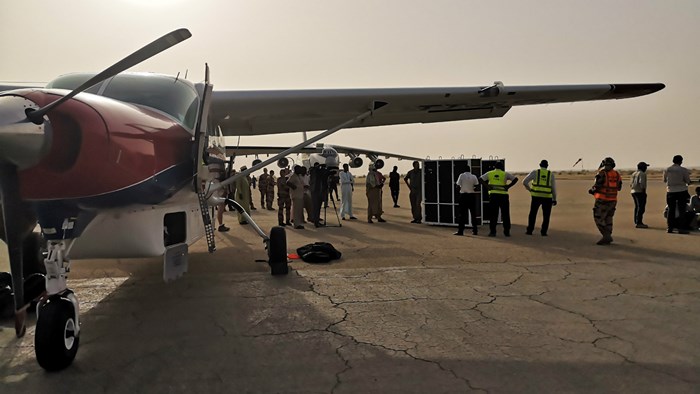 There are only about 100 dama gazelles left alive in the wild. One of the critically endangered animals is named Becki, after Mission Aviation Fellowship (MAF) pilot Becki Dillingham, who is helping to save the strikingly beautiful creatures with long legs and short curled horns from extinction.

Becki the gazelle was flown across a vast and mostly roadless expanse of desert in a Cessna 182, with her horns sheathed in rubber tubing to keep her from damaging anything during the flight. She was delivered to Ouadi Rimé-Ouadi Achim Game Reserve, a protected grassland roughly the size of Scotland, where she will can thrive and reproduce.

Becki the missionary pilot said she didn’t know she would be doing jobs like this when she arrived in Chad with her husband and two children in 2017. But the UK-trained physicist who had her first flying lesson at age nine nevertheless sees transporting endangered animals as a core part of her calling as a Christian missionary pilot.

“We have what are called five marks of mission, which are pointers as to where we should be going with all of the work that we do,” Dillingham told CT from the MAF base in the Chadian capital N’Djamena. “One of those is creation care—looking after the environment and wildlife.”

Dama gazelles certainly need care. Seen in Africa as symbols of elegance, they once lived in abundant numbers across the Sahel, the arid grasslands that fringe the southern border of the Sahara Desert from the Atlantic Ocean to the Red Sea.

But hunting, regional wars, and habitat loss have driven this antelope species dangerously close to extinction. They now live in only four isolated pockets in Niger and Chad. And those pockets face new dangers and further encroachment all the time.

A dwindling group living in the Manga region near the town of Salal, for example, was quickly losing habitat and then threatened in 2019 by local hunters on motorbikes. Sahara Conservation Fund (SCF), a Paris-based nonprofit that has a dama gazelle program, leaped into action and orchestrated a plan to rescue the animals and move them to the reserve.

SCF got approval from the Chadian government and organized six international conservation groups and MAF to help. MAF pilot Phil Henderson joined the team. After days and days of searching, they tracked three female gazelles in the expansive Manga, tranquilized them, and flew them to safety.

The three gazelles, including Becki, were put in a large protected enclosure at the Ouadi Rimé-Ouadi Achim Game Reserve. A male was added so they can breed and raise offspring. Becki has had three fawns since the rescue: a female named Shaika, a female named Hiti, and a male named Kallé.

“They will be released back into the wild once they are old enough not to be threatened by jackals and dogs from the nomad camps,” Watkin said.

Some dama gazelles are also being bred in Abu Dhabi, at the Delaika Wildlife Conservation Center. Getting them back to Chad is a challenge, though. It’s a 10-hour flight from Abu Dhabi to Abeche, Chad, and then a difficult 10-hour drive north from there to the reserve. 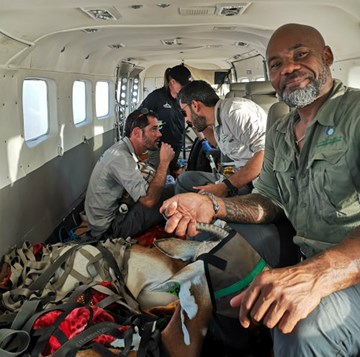 A veterinarian hold the head of a sedated dama gazelle aboard an MAF plane in Chad.

In March, MAF stepped in again to help, transporting three more gazelles in a 35-minute plane ride. Those animals have also been added to the breeding program, which conservationists hope will produce 20 to 30 fawns per year, increasing the total population to about 150.

MAF was formed by World War II veterans who wanted to put their flying skills to good use in peacetime. Most of their work involves supporting evangelists, church planters, and Bible translators in remote places that would otherwise be inaccessible.

But they’ve always helped other people too—whether that’s sick locals who need to fly to an urban hospital or conservationists in need of supplies.

Watkin recalled a time back in the 1990s when he was working on a conservation project in Garamba National Park, in northeast Democratic Republic of Congo, when the country was still known as Zaire. The MAF pilots flew in with regular supplies of fresh food and mail. They provided “a lifeline” to him and his colleagues in the park.

“MAF as an organization has been extraordinarily useful for conservation projects throughout the world,” he said. “It’s always a joy to have them in camp, to be able to share our stories with new people and collaborate.”

MAF has helped conservationists more recently by conducting aerial surveys of endangered animals. In November, the Christian pilots helped conduct a survey of the wildlife in Ouadi Rimé-Ouadi Achim Game Reserve. In addition to dama gazelles, they counted more than 200 scimitar-horned oryx, a species that died out in the wild 30 years ago but has been reintroduced in the reserve.

MAF has also helped with aerial surveys in Zakouma National Park, in the wetter, more forested south of the country, where conservationists protect the elephants that were nearly exterminated by ivory poachers in the early 2000s.

MAF International’s chief executive, Dave Fyock, said wise stewardship of God’s resources has been a value since the beginning of the organization. But the shape of that calling has changed over the years.

“Exactly how one goes about best living out that responsibility is one of regular debate and discussion,” Fyock told CT.

He says MAF pilots draw on God’s command in Genesis to care for creation and see it as one of the five marks of mission, alongside proclamation, teaching, compassion, and justice.

“Working with others to care for endangered animals demonstrates an understanding of who God is and what he has commanded us to do,” he said. “It allows us to celebrate when we help conservationists do something we believe was given to mankind to do.”

It also explains why one of the few endangered dama gazelles in Chad is named Becki.

A veterinarian hold the head of a sedated dama gazelle aboard an MAF plane in Chad.
expand