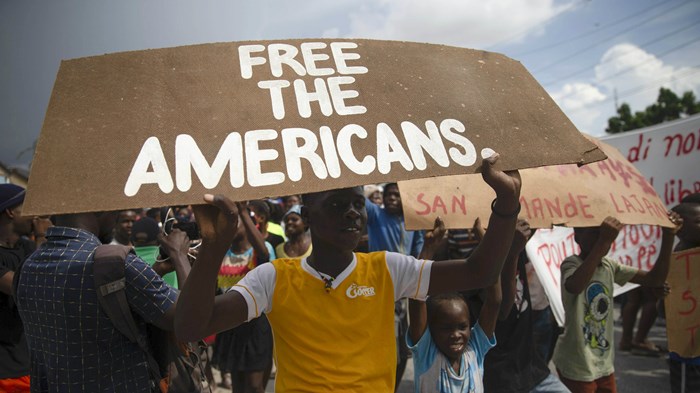 Editor’s note: The 400 Mawozo gang has threatened to kill the missionaries if their ransom demand is not met.

PORT-AU-PRINCE, Haiti — Negotiations stretched into a fourth day seeking the return of 17 members of a US-based missionary group kidnapped over the weekend by a violent gang that is demanding $1 million ransom per person.

The group includes five children whose ages range from 8 months to 15 years, although authorities were not clear whether the ransom amount included them, a top Haitian official said Tuesday. Sixteen of the abductees are Americans and one Canadian.

Christian Aid Ministries (CAM) said it would hold a day of fasting and prayer for its missionaries Thursday.

“We, along with government authorities, continue to work hard to bring them home safely,” the Ohio-based group said. “This time of difficulty reminds us of the ongoing suffering of millions of Haitians. While our workers chose to serve in Haiti, our Haitian friends endure crisis after crisis, continual violence, and economic hardship.”

The abduction is one of at least 119 kidnappings recorded in Haiti for the first half of October, according to the Center of Analysis and Research of Human Rights, a local nonprofit group. It said a Haitian driver was abducted along with the missionaries, bringing the total to 18 people taken by the gang.

The Haitian official, who was not authorized to speak to the press, told The Associated Press that someone from the 400 Mawozo gang made the ransom demand Saturday in a call to a leader of CAM shortly after the abduction.

“This group of workers has been committed to minister throughout poverty-stricken Haiti,” the Ohio group said, adding that the missionaries—who were returning from visiting an orphanage when they were abducted—worked most recently on a project to help rebuild homes lost in a magnitude-7.2 earthquake that struck southwestern Haiti on August 14. 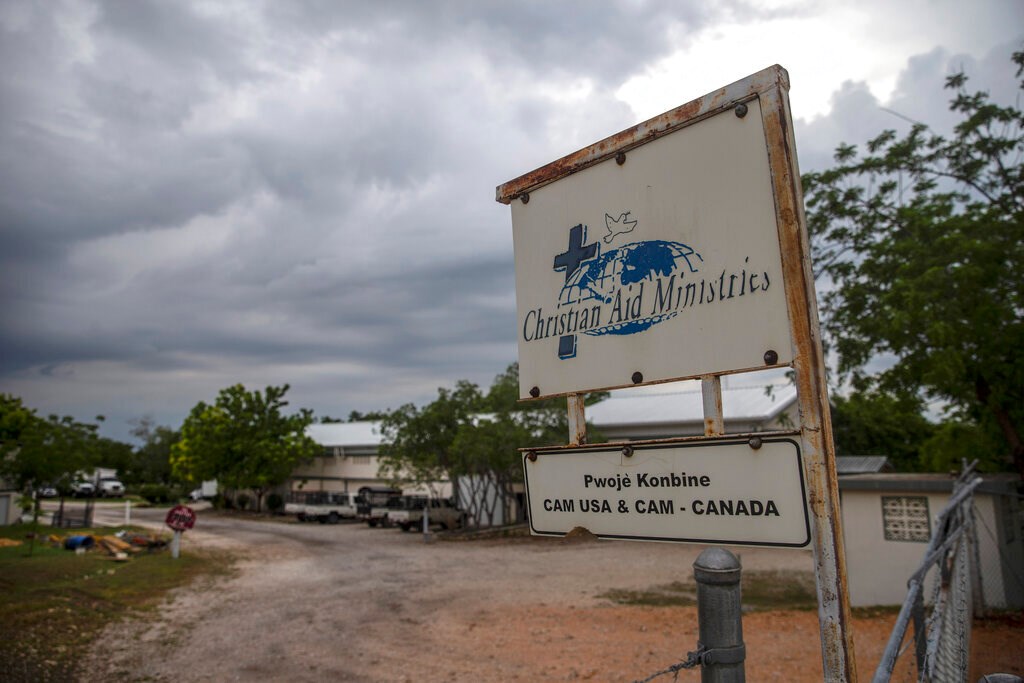 Today, we again commit our workers to God’s care. “For He shall give His angels charge over you, to keep you in all your ways” (Psalm 91:11). Pray that our workers could respond to hatred with Jesus’ love, overcome the spirit of fear with faith, and face violence with a genuine desire to bless their oppressors.

We request prayers for the Haitian and American civil authorities who are working to resolve this situation. We believe the command of the Bible in I Timothy 2:2-3—“Therefore I exhort first of all that supplications, prayers, intercessions, and giving of thanks be made for all men, for kings and all who are in authority, that we may lead a quiet and peaceable life in all godliness and reverence.”

Responding to the recent wave of kidnappings, workers staged a protest strike that shuttered businesses, schools, and public transportation starting Monday. The work stoppage was a new blow to Haiti’s anemic economy. Unions and other groups vowed to continue the shutdown indefinitely.

In a peaceful demonstration Tuesday north of Port-au-Prince, dozens of people walked through the streets of Titanyen demanding the release of the missionaries. Some carried signs that read “Free the Americans” and “No to Kidnapping!” and explained that the missionaries helped pay bills and build roads and schools.

“They do a lot for us,” said Beatrice Jean. 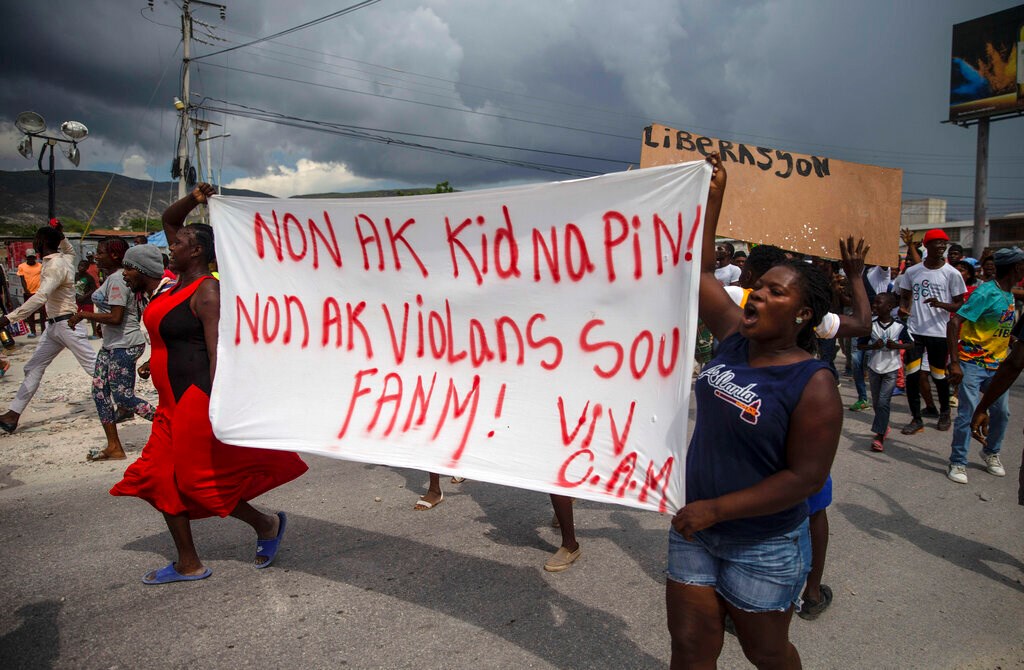 Haitian protesters carry a banner with a message that reads in Creole: "No to kidnappings, no to violence against women! Long live Christian Aid Ministries," demanding the release of kidnapped missionaries, in Titanyen, north of Port-au-Prince, Haiti, on Tuesday, October 19, 2021.

Hundreds of motorcycles zoomed through the streets of Port-au-Prince on Tuesday as the drivers yelled, “If there’s no fuel, we’re going to burn it all down!”

One protest took place near the prime minister’s residence, where police fired tear gas to disperse a crowd demanding fuel.

In Washington, White House press secretary Jen Psaki said Tuesday that the FBI was “part of a coordinated US government effort” to free the missionaries. The US Embassy in Port-au-Prince was coordinating with local officials and the hostages’ families.

“We know these groups target US citizens who they assume have the resources and finances to pay ransoms, even if that is not the case,” Psaki said, noting that the government has urged US citizens not to visit Haiti.

It is longstanding US policy not to negotiate with hostage takers, and Psaki declined to discuss details of the operation.

The kidnapping was the largest of its kind reported in recent years. Haitian gangs have grown more brazen as the country tries to recover from the July 7 assassination of President Jovenel Moïse and the earthquake that killed more than 2,200 people. 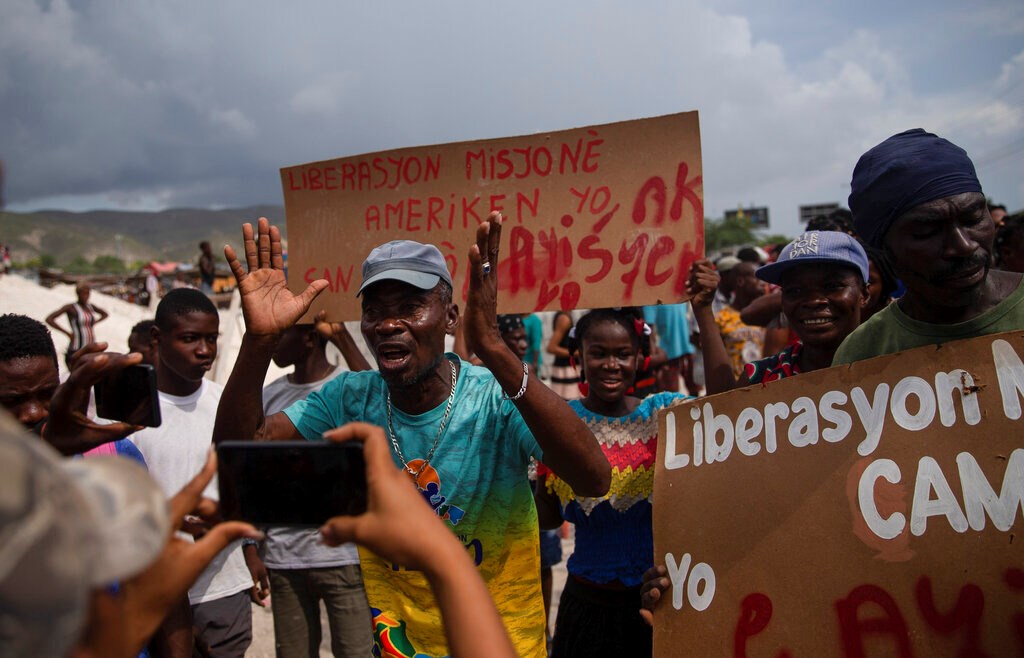 Haitians protest for the release of kidnapped missionaries near the Christian Aid Ministries headquarters in Titanyen, north of Port-au-Prince, Haiti, on Tuesday, October 19, 2021.

Christian Aid Ministries said the kidnapped group included six women, six men, and five children. “Their heart-felt desire is to share the love of Jesus,” it stated. “Before the kidnapping, their work throughout Haiti included supporting thousands of needy school children, distributing Bibles and Christian literature, supplying medicines for numerous clinics, teaching Haitian pastors, and providing food for the elderly and vulnerable.”

A sign on the door at the organization’s headquarters in Berlin, Ohio, said it was closed due to the kidnapping situation.

News of the kidnappings spread swiftly in and around Holmes County, Ohio, hub of one of the largest populations of Amish and conservative Mennonites in the United States, said Marcus Yoder, executive director of the Amish and Mennonite Heritage Center in nearby Millersburg, Ohio.

Christian Aid Ministries is supported by conservative Mennonite, Amish, and related groups that are part of the Anabaptist tradition.

The organization was founded in the early 1980s and began working in Haiti later that decade, said Steven Nolt, professor of history and Anabaptist studies at Elizabethtown College in Pennsylvania. The group has year-round mission staff in Haiti and several countries, he said, and it ships religious, school and medical supplies throughout the world.

“We greatly appreciate the prayers of believers around the world, including our many Amish and Mennonite supporters,” said CAM. “The Bible says, ‘The effective, fervent prayer of a righteous man avails much’ (James 5:16).

Join us in prayer that God’s grace would sustain the men, women, and children who are being held hostage. In a world where violence and force are seen as the solution to problems, we believe in God’s call to Christians to “…not be overcome by evil, but overcome evil with good” (Romans 12:21). Pray that those being held hostage could find strength to demonstrate God’s love. The kidnappers, like all people, are created in the image of God and can be changed if they turn to Him. While we desire the safe release of our workers, we also desire that the kidnappers be transformed by the love of Jesus, the only true source of peace, joy, and forgiveness.