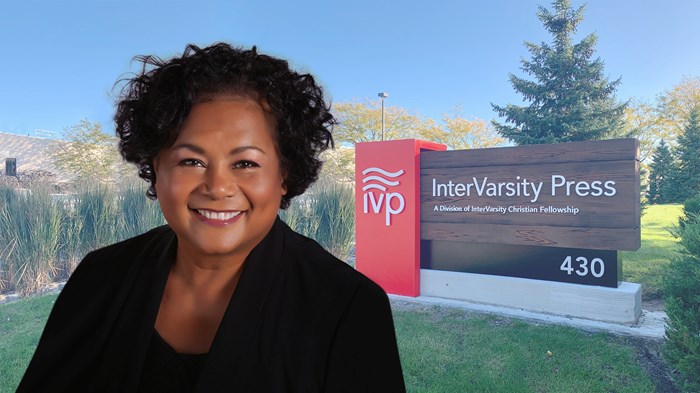 Terumi Echols has been named the new president and publisher of InterVarsity Press, bringing decades of experience in evangelical publishing as she becomes the first person of color to lead IVP and its first woman president in over 35 years.

Following the announcement on Monday, IVP colleagues applauded her passion and entrepreneurial spirit. Associate director of strategic partnerships Helen Lee called Echols a “delight and a change agent.” Her predecessor Crosby said she was “a key contributor and visionary to many, if not most, of the advances InterVarsity Press made during my time as its publisher.”

Before coming to IVP—the 75-year-old publisher that first established itself with titles like Basic Christianity by John Stott, The God Who Is There by Francis Schaeffer, and Knowing God by J. I. Packer—Echols worked for nearly 20 years at Christianity Today International, including as chief publishing officer and publisher of Christianity Today.

During her tenure with CT, Echols was one of the highest-ranking people of color to work for the ministry. She was part of CT’s 2013 redesign of both its print publication and website and oversaw efforts including the magazine’s Her.meneutics blog, Today’s Christian Woman, and Behemoth.

Echols sees her selection as another example of IVP’s culture of being the first in the Christian publishing industry to break barriers; in 1984, Linda Doll became InterVarsity’s first female director. “It speaks well to the Christian marketplace as a whole that women have arrived,” said Echols. “We have a great deal to contribute.”

Her appointment also comes amid growing calls and efforts for diversity across evangelical publishing. Echols most recently served as IVP’s director of finance, fulfillment, and operations, and in that role, she was part of the team that launched IVP’s Every Voice Now initiative in 2020. The effort focuses on recruiting diverse professionals and developing, marketing, and selling books by authors of color such as IVP bestseller Esau McCaulley.

She said she is excited about “thinking through serving minority audiences better. How do we do that better in a way that actually honors them?”

In his new role with ECPA, Crosby sees publishers pursuing people of color more now than in years past. By consistently posting jobs with historically black colleges and universities, targeting more prospective employees of color through sites like Indeed, and offering minority-focused internship programs, Christian publishing houses are trying to welcome people of color into their ranks.

The result is increasing diversity among the staff of Christian publishers, though Crosby acknowledges the industry still has a long way to go.

Jevon Bolden, a literary agent on the ECPA’s newly formed diversity and inclusion committee, has been encouraged by the number of conversations she’s having with industry professionals about hiring diverse authors and staff, but she says the industry does not have hard data on trends in how many people of color have their writing published by major publishers. And without data, she says, it’s hard to know for sure if the trends are moving in the right direction.

A 2020 report by Publishers Weekly found that InterVarsity had the most ethnically diverse staff of any major Christian publisher. Of the company’s 90 employees, 22 were people of color (24%), putting the company on par with the publishing industry at large, which is 76 percent white, according to a survey by Lee and Low Books.

In 2020 IVP responded to renewed calls for racial justice with the Resources for Faithful Justice campaign, offering readers the chance to download one of 25 e-books for free. Response to the campaign broke the IVP server and led to more than 33,000 book downloads, according to Justin Paul Lawrence, IVP’s senior director of sales and marketing.

“To see a woman of color take the lead at a Christian publisher who has led in having one of the most diverse publishing programs in all of Christian publishing is a really beautiful thing,” Bolden said. “It proves their commitment to the growing needs of their diverse and global audience.”

Echols also sees the significance of coming into this role during a time when the church is “painfully divided and spiritually hurting” and hopes to build on IVP’s legacy of offering meaningful and formative resources for Christian readers.

“I intend to invest so that a more globally, generationally, and ethnically diverse group of readers are helped to believe,” she said.