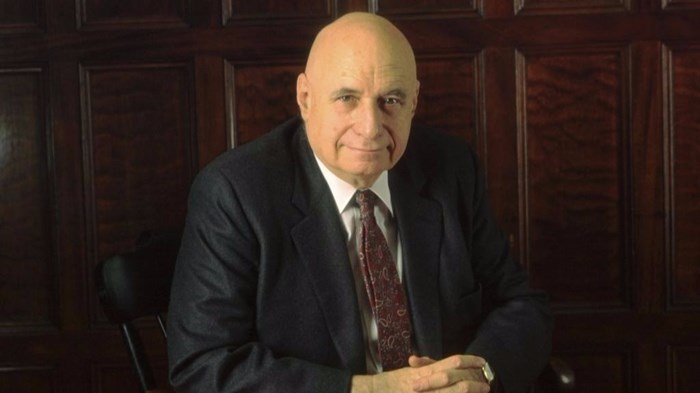 Peter Berger, an “incurable Lutheran” who became one of America’s most respected sociologists of religion, has died.

Boston University (BU) announced the passing this week of the 88-year-old professor emeritus, who founded the school’s Institute on Culture, Religion, and World Affairs in 1985 and led it to become a leading source of scholarship on “religion in an age of globalization.”

An opponent of the “God is dead” movement popular in academia, Berger became “something of a rock star among Christ-following academics,” Gordon College president and sociologist Michael Lindsay explained in a CT tribute.

Southern Seminary president Al Mohler praised Berger as “perhaps the most influential social thinker of our times” and “one of the individuals I cite most frequently.”

Berger’s writing was “so good that it made all the theologians just want to be sociologists when they grew up,” stated Gregory Thornbury, president of The King’s College, in a tweet that also praised scholar Rodney Stark.

“There have been few scholars as independently-minded and as influential,” tweeted Hunter Baker, author of The End of Secularism and a professor of political science at Union University.

“This is not my community. I’m evangelisch but not evangelical,” he told Gordon College’s Center for Faith and Inquiry (CFI) in a 2013 interview. “I usually describe myself as incurably Lutheran, but I’m very comfortable with evangelicals. And between evangelicals and mainline Protestants, I prefer evangelicals for reasons theologically.”

This past April, in one of his last blogs for The American Interest on “gloomy and cheerful evangelicals,” Berger wrote of his religious self-identification: “I’d always have a hard time choosing between ‘none—no religious affiliation,’ ‘relatively conservative Lutheran,’ and ‘agnostic.’” (He opined on evangelicals regularly.)

Theologian Os Guinness told CT in 2015 that Berger had “probably shaped my mind more than any other living person,” citing the sociologist’s “wonderful idea of ‘signals of transcendence.’” Guinness explained:

He helped me see the difference between modernism, which is a set of ideas, and modernity, which is more like the cultural air we breathe. He has fascinating insights into the ways minds work and how people change their minds, switching from one worldview to another—what sociologists call a “paradigm shift,” or what Christians call repentance and conversion. He also has an incredible sense of the power of humor.

Berger’s 1966 book, The Social Construction of Reality (1966) is “considered one of the most influential texts in its field and was named by the International Sociological Association (ISA) as the fifth most influential book written in the field of sociology during the 20th century,” noted BU’s tribute.

In 2013, Berger told CFI how he came to abandon securalization theory: a popular academic idea that “modernity inevitably produces a decline of religion.” He explained:

When I started out doing sociology of religion—like two hundred years ago—everyone else had the same idea. And I more or less assumed that it was correct. It wasn’t a completely crazy assumption; there were many reasons why people said that. But it took me about twenty years to come to the conclusion that the data doesn’t support this, and other people came to the same conclusion.
…
The theory is wrong. Now, to conclude that the theory is wrong is the beginning of a new process of thinking. I came to the conclusion some years ago that to replace secularization theory—to explain religion in the modern world—we need the theory of ­pluralism. Modernity does not necessarily produce secularity. It necessarily produces pluralism, by which I mean the coexistence in the same society of different worldviews and value systems.

That changes the status of religion. It’s a challenge for every religious tradition. But it’s not the challenge of secularity; it’s a different challenge. The problem with modernity is not that God is dead, as some people hoped and other people feared. There are too many gods, which is a challenge, but a different one. So this, in terms of my career as a sociologist of religion, has been my major change of mind.

Speaking as a sociologist, you point at something which is very interesting, which is a development in recent decades of a self-conscious Evangelical intelligentsia. Not only in institutions like this, and there’s a network of these institutions across the country with some very significant people. You mentioned Mark Noll. He is respected not just by Evangelicals, but as a historian. But [people like this are] also dispersed in other situations, not just Christian colleges. That’s a significant change. By the way, an interesting parallel is what happened to Jews in the 1930s, when places like Harvard and Princeton that were closed to Jews suddenly had an influx of very bright, ambitious, young Jewish professors and students, graduate students. Something similar is happening here, I think. These young, bright Evangelicals are invading old fortresses like Harvard or Princeton.

The interesting question is how will this affect the Evangelical community, as it becomes more, well, educated, more respected, less marginal. It must have been about twenty years ago when James Hunter wrote this book [James Davison Hunter. Evangelicalism: The Coming Generation. Chicago: University of Chicago, 1987] in which he predicted that Evangelicals in another generation or so would become like other Protestants, as boring as Congregationalists let’s say. That has not happened, at least not yet. So prediction is very dangerous.

What I would predict is there will be some effect of this, and there are some examples where Evangelicalism collided with general views of what the world is like. Evolution is an obvious example. But that so far as yet has not influenced the core of the Evangelical faith, and I don’t see this happening, yet. The future, one never knows.

Richard Mouw, a public theologian and philosopher and president emeritus of Fuller Seminary, shared a memory of Berger on Facebook as his tribute:

Berger interviewed himself on “epistemological modesty” for The Christian Century in 1997.

Mohler interviewed Berger in 2010 on rethinking the theory of secularization.

In 2008, Berger wrote “two cheers for the prosperity gospel” for CT’s sister publication, Books & Culture, and reflected in CT’s pages on “redeeming prosperity” in 2009. He also examined “why Americans don’t think God talk is weird” in a 2012 CT review of Robert Wuthnow’s The God Problem.