Roll Tide and Read Your Bible: Alabama Ranks No. 1 for Scripture Lovers 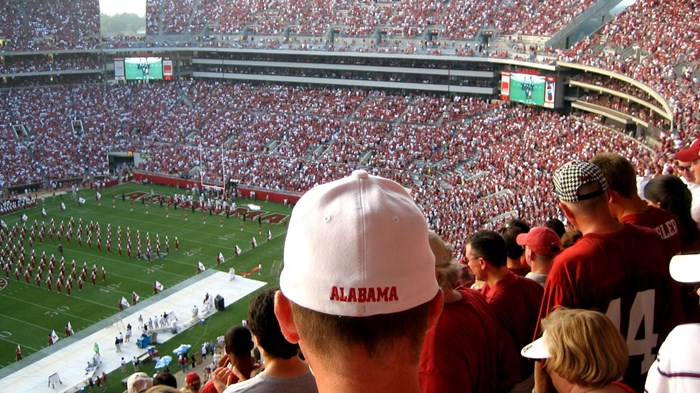 The Bible Belt lived up to its name as Southern locales topped the American Bible Society (ABS) and Barna Group’s annual list of Bible-minded cities, with Birmingham, Alabama, earning the No. 1 spot.

The rankings, based on a city’s Bible reading habits and beliefs, come from a decade of interviews with more than 63,000 adults in the country's 100 largest metropolitan areas. While the study crowned a new winner (Chattanooga ranked first last year), many demographic trends stayed the same, notes ABS:

As in past years, the Bible Belt performed strongly in the 2015 rankings, while East Coast cities once again brought up the rear of the list. Small cities also generally performed better than did large cities. Just one of the top 10 Bible-minded cities ranks in the top 25 media markets.

The top-ranking Birmingham/Anniston/Tuscaloosa market had the highest proportion of respondants saying they'd read the Bible in the past week and strongly believe in the accuracy of Scripture. It's home more than a dozen megachurches, including the 4,500-member Church at Brook Hills, led for several years by David Platt. The evangelical Samford University is also located in Birmingham.

Of course, the area is best known for the Tuscaloosa-based University of Alabama and its popular football program, Crimson Tide. (Thom S. Rainer, president and CEO of LifeWay, is among its notable alumni.)

Tennessee cities took the No. 2 and No. 3 spots, followed by Lynchburg, Virginia—where Liberty University is located.

Here's the full list of the top 10 most Bible-minded cities:

And the 10 least Bible-minded cities:

This year marks the first time for New York to be listed in the bottom 10.

The complete ranking is below. 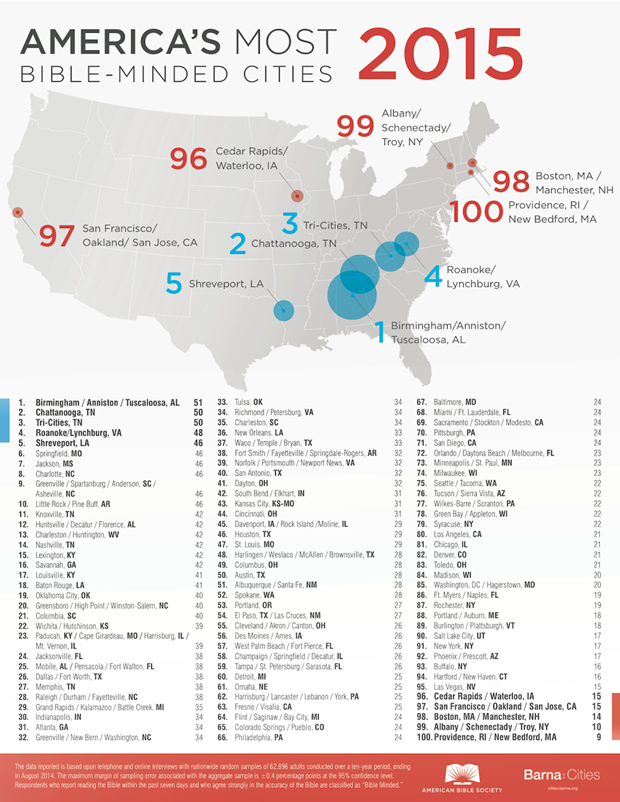 In addition to noting 2014 and 2013’s top and bottom cities, CT compared ABS/Barna's results with Bible Gateway's rankings of top cities using its website and previously examined a separate ranking of America's "most saintly" cities.

Roll Tide and Read Your Bible: Alabama Ranks No. 1 for Scripture Lovers

Roll Tide and Read Your Bible: Alabama Ranks No. 1 ...