At least in certain situations, according to new Pew Research survey on end-of-life medical treatment.
Sarah Eekhoff Zylstra|November 21, 2013 11:13 AM 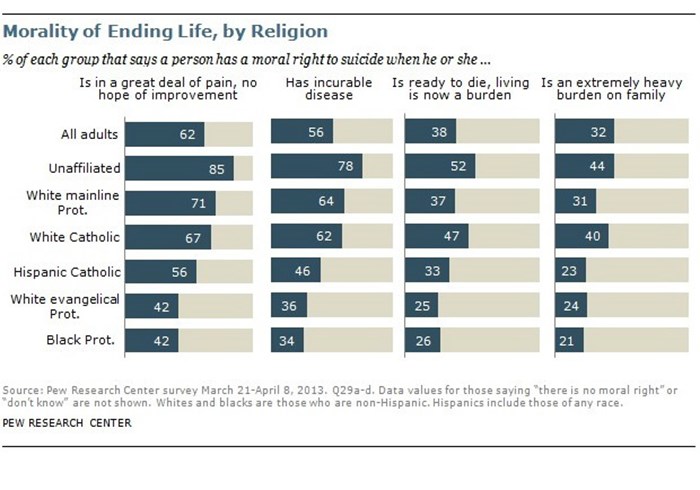 About a quarter of evangelicals believe that a person has a moral right to suicide if he or she is ready to die because living is now a burden, or if that person is an extremely heavy burden on his or her family.

Belief in suicide as a moral option for those who are suffering has grown modestly in the general public since 1990, rising to 62 percent from 55 percent. Since the percentage of American adults who say suicide is never morally right has stayed roughly the same, most of that growth comes from people who answered "I don't know" last time now taking a stand, according to the study.

However, in a seeming contradiction, a main finding (among many) of the study was a growing segment of Americans believe that doctors should do everything possible to keep patients alive. While that number is still in the minority—about 31 percent—it's a minority that has doubled since the question was asked in 1990, when 73 percent of Americans believed patients should sometimes be allowed to die.

Again, responses vary according to how often a person attends worship services. Almost 60 percent of adults who attend weekly believe there are circumstances in which a patient should be allowed to die, compared with 74 percent of those who seldom or never attend.

The percentage of white evangelicals who believe life should be saved no matter what has grown from 19 percent in 1990—a seven-point shift which ties for the smallest change among any measured group.

Opinions on refusing treatment shift, however, when the patient is an infant. Regarding proxy decisions by parents—a theme at the core of recent prosecutions of child deaths among families that practice faith healing—only about one quarter of white evangelicals support the parents' right to refuse medical treatment for a child. Meanwhile, almost 70 percent of white evangelicals and 75 percent of black Protestants believe that infants born with life-threatening defects should receive as much medical treatment as possible. (Among all adults, about 38 percent believe a parent has the right to refuse treatment for an infant with a life-threatening diagnosis.)

CT regularly covers discussions on death and dying—including Pew's earlier finding that only 1 in 3 evangelicals want to live forever, as well as the trauma of suicide.