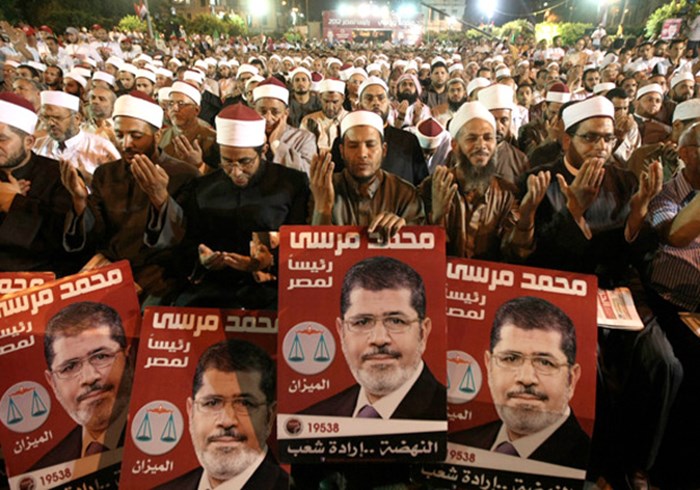 In the most democratic elections since 1952, the people of Egypt have freely chosen their leader. And for the first time in history, that leader is a native-born Islamist.

Mohamed Morsy of the Muslim Brotherhood captured 51 percent of the vote, narrowly defeating his rival Ahmed Shafik (widely perceived as the candidate of the former regime) who gathered 48 percent. Jubilant crowds in Tahrir Square celebrated into the night, though for diverse reasons.

Many rejoiced at the triumph of the candidate of Islam, one who had pledged to implement Shari'ah law. Others, nervous at the prospect of Muslim Brotherhood rule, nevertheless exulted in the triumph of the revolution, first deposing Mubarak and then defeating his former minister.

Some, though not likely in Tahrir, quietly exhaled at a democratic election and rotation of power, hopeful these gains will not be reversed.

Meanwhile, at a Christian retreat center outside of Cairo, a number of Coptic women shed tears of despair over their community's future, as they huddled around a television and watched Morsy be proclaimed the winner.

Some of the men tried to find the positive. "At least now they [the Islamists] will not burn the country," said Girgis. "It's okay, it's okay. God is present," said Maged as he stood up and left the room slowly. One of the women shut off the TV dejectedly. Some exchanged faint smiles of expectation, wondering what the next four years would hold.

The days between the election and the delayed announcement of the result filled all Egyptians with anxiety. Rumors swelled that if Shafik won, it would only be by fraud. Many imagined Islamists would at the least paralyze Egypt with demonstrations, and at the worst launch a Syria-style civil war. Other rumors outlined all the ways Islamists engaged in fraud.

The Muslim Brotherhood tried to dismiss these claims, and during his victory speech Morsy sought to assuage the fears of the Copts. "We as Egyptians, Muslims and Christians … will face together the strife and conspiracies that target our national unity," he said. "We are all equal in rights, and we all have duties towards this homeland." Morsy even proceeded to resign from the Brotherhood following his victory speech.

Some Copts are not convinced, instead believing the country has been slowly but surely manipulated into Islamist rule.

"We will be quiet now and wait and see," said Nader Wanis, who directs a cultural center in Alexandria. "Some Copts will immediately start to advocate for our rights, but in vain. Muslims are very deceiving; they speak as if they are for human rights but they will give us nothing."

Many expect the worst. "Morsy's win produces many fears for Copts, because he will establish a religious state and is against citizenship," said Nader Shukry of the Maspero Youth Union, a human and Coptic rights organization formed following the post-revolution attacks on churches. "Copts fear we will be isolated from high positions in government and society even worse than we were under Mubarak."

Most nervous are Copts along the Nile River in southern Egypt—known as Upper Egypt—whose small communities are often caught between the vagaries of rumor-filled media manipulations. One report circulating from the area, unable to be independently verified, depicts local Islamists as gathering in front of a church and firing celebratory gunfire into the air.

"Between ourselves [as Christians] we say we are for Shafik, but we cannot mention this publicly," said Father Yu'annis, a priest of the Coptic Orthodox Church in Upper Egypt. "But as a church we say—and believe—that we will accept who God gives us and work for the good of Egypt. Many people are afraid now and are thinking of emigrating. But Egypt is a country of rumors, and if not for these we would all be fine."

Still, his personal perspective is rather uncommon. "Let the Shari'ah be implemented," he said. "It will not harm us but will work to stop corruption."

Though few Copts have such positive expectations of Shari'ah, many do find some hope in Morsy's victory.

"No matter how good or bad Morsy will be as a president, at least we have rotated power to someone different," said Ayman Ramsis, a Coptic evangelical development consultant. "Yes, we might not be able to secure a second rotation, but being afraid of change will hinder us from moving forward. Maintaining the old system means maintaining the high possibility of continued corruption."

Others think Copts must come to terms with the elections.

"We accept the results and will not demonstrate," said Mario George, an Orthodox financial manager at a local marble factory." We will give him a chance to work as our country has many problems—but I'm not happy."

"We prayed that Shafik will win, but this is what God wants as the people chose him," said Lydia Youssef, a social service director in Egypt's Anglican Church. "But I don't think he will stay in power for long. He will trouble us somewhat, but this is normal for us as Copts."

Rejecting this "normal," many younger Copts joined activists and boycotted the elections altogether, finding the same threat behind either candidate.

"To tell the truth, I couldn't care less who won. As we say in Arabic, they are both worse than each other," said Amira Mikhail, an evangelical volunteer with Tissue Paper, which advocates for street children reduced to selling Kleenex packets as they wander through Cairo. "No president will have any power because we are living in a military state; he will be a puppet of the military council. … Our choice was false; we were facing neither an Islamic brainwashing nor a return to the former regime."

Though many Copts were not fond of Mubarak, they do not share Mikhail's distaste for military rule—especially compared to the alternative.

Fawzi Khalil, a pastor at Kasr El Dobara Evangelical Church near Tahrir Square, admits the temptation of many to flee abroad but seeks to give a more biblical perspective.

"Our church is divided," he said. "Many already have a visa or will apply for one soon. But many others will stay because they have a vision from God that this is their land."

Kasr El Dobara, the largest Protestant church in the Middle East, is encouraging its people to stay. "We expect a revival, and sometimes you have to go through the darkness before you can see the light," said Khalil. "We encourage people not to have a phobia of the Brotherhood. They are human and cannot rule a large country like ours without consensus. We must show them we are good citizens and will continue to be—fighting for our rights, but trusting in God."

Still, he is ill at ease. "As Morsy won, I will bow my knees to God and pray more," he said. "Will he have the experience necessary to rule Egypt, or are we entering a dangerous experiment?"

Bishop Thomas, a member of the Holy Synod of the Coptic Orthodox Church, offers the analogy of a bird that recently began to build a nest in his church. "I gathered our men and we all began to clap in unison," he said. "The sound disoriented the bird and as it tried to fly, it froze in fear and fell to the ground. We carried it outside, and then it flew away.