Why the church should resist technologies that aim to liberate us from ordinary, embodied life.
Andy Crouch|March 15, 2019
Image: Illustration by Jonathan Bartlett

Amid the pop-culture detritus of my childhood, one unforgettable fragment is the TV series The Six Million Dollar Man. For the children of the 1970s, Steve Austin (played by Lee Majors) was our first cyborg, fitted with a “bionic” eye and limbs after a nearly fatal accident. Every episode began by retelling his origin story, as a voiceover intoned: “We can rebuild him. We have the technology. We can make him better than he was. Better, stronger, faster.”

Those opening lines have stuck with me. They were a kind of boyhood liturgy—a ritual repeated weekly as I watched the latest episode. They compress into a few sentences a great deal of what makes technology the central ideology of our age.

It begins with repair (“We can rebuild him”). The Enlightenment philosopher Francis Bacon urged his contemporaries to unlock the secrets of nature for “the relief of man’s estate”—the treatment of injury and illness and the end of material poverty. Who would not welcome, after a major accident, the comforting words “We can rebuild you. We have the technology”?

But the liturgy quickly moves from repair to enhancement—“better than he was before.” After all, if you have the technology to repair someone, why not make some improvements while you’re at it? This, of course, requires a fixed definition of “improvement”—what makes someone “better” than they were. And this the liturgy also supplies in a series of synonyms: “better, stronger, faster.”

In one sense, the vision of The Six Million Dollar Man is coming true. We are able to rebuild human bodies in ever more sophisticated ways. (Just to name one especially striking development, 40 patients have received a transplanted human face since the procedure was first performed in 2005.) And we are moving beyond repair to enhancement, not just in the dubious results of elective cosmetic surgery but in the realm of speed and strength. The prosthetic replacements now available for human limbs are sufficiently capable that many athletes believe that amputees who employ them, most famously the South African sprinter Oscar Pistorius, have an unfair competitive advantage.

But perhaps extending the physical capabilities of the human body was just a warmup. Computers, after all, exist to extend human beings’ cognitive capacities—our ability to process information, to store memories (how many of your friends’ phone numbers do you know by heart?), and increasingly, thanks to machine learning, to make predictions.

Already our smartphones are very nearly an extension of ourselves. A somewhat silly 2018 survey found that 23 percent of young adults would give up one of their five senses rather than their phone, and 10 percent would rather sacrifice one of their fingers, but there is nothing silly about the anxiety we feel when we lose track of our devices or see them run out of battery power. How long until we decide—like the 4,000 residents of Sweden now equipped with chips that enable a payment technology called Swish—to implant them in our bodies, where they can never be misplaced? 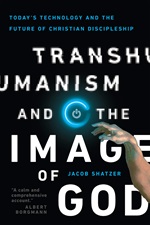 One logical extension of this technological progress is the movement called transhumanism: the belief, which hovers somewhere between prediction and prescription, that technology is about to usher us into a categorically new kind of human existence. Union University theology professor Jacob Shatzer helpfully surveys this movement in Transhumanism and the Image of God. Shatzer explores a broad movement that can’t be reduced to its most common caricature, a group of aging technologists who hope to upload the contents of their brains into computers. Instead, he identifies some core trends, already here in some ways and not yet in others, that affect all of us—not just those lining up for chip implants.

These trends include “morphological freedom” (the increasing reality that we can reshape human bodies in ways that diverge from our “natural” bodies), “augmented reality” (likely to be far more widespread and powerful than its more drastic cousin “virtual reality”), and artificial intelligence (in which machine-based cognition supplements and eventually merges with human thinking and feeling).

Transhumanists are generally optimistic about these trends, while many Christians raise questions. The core question we all should be wrestling with, Shatzer offers, is what is real—in our experiences, the places we inhabit, the relationships we form, and our self-understandings.

For many transhumanists, what is “real” begins and ends with what human beings can construct, so that our newly reshaped bodies—“better than they were before”—will be just as real as the bodies we were born with, and relationships carried on through entirely virtual means can be just as real as those carried out in the flesh, if not more so.

For Christians, however, what is real is never a mere matter of human conjuring. God created a real world, created us as real persons in real places—and of course, God also entered that real creation in a real way in Christ. Surely that sets some limits on the reality we can, or at least should, construct for ourselves.

While Shatzer helpfully pushes back on transhumanism with this Christian perspective, his most helpful contribution is showing how all of us, very much including Christians, are already embracing habits of life—he calls them “liturgies of control”—that train us to accept the transhumanist promise of “better, faster, stronger” and, perhaps, “realer.”

These liturgies—the daily ways we choose virtual relationships over embodied ones or neglect the places we actually live for faraway or entirely imagined ones—make it all too possible that most Christians will offer no effective resistance to “better, faster, stronger” as it beckons us onward. 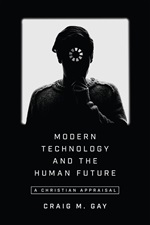 There is, however, another side of the technological story, masterfully laid out by Craig M. Gay of Regent College in Modern Technology and the Human Future. This is a story about the strange dawning feeling that far from enhancing our lives, technology has actually begun to have diminishing returns.

Take that liturgical line “better, faster, stronger.” How has that turned out 40 years later? Among my fellow eight-year-olds watching The Six Million Dollar Man in 1974, roughly 5 percent were obese; today that number is around 15 percent. Our children are the leading edge of the first non-infectious public health epidemic in history, the cluster of high weight, high blood pressure, and high blood sugar levels that goes by the name “metabolic syndrome” and now afflicts one in four adults in the US. The most likely culprit for metabolic syndrome is, simply enough, inactivity—the result of a screen-based lifestyle that pinions us in front of glowing rectangles for both work and leisure.

And are we better off cognitively—more intellectually and mentally fit, in the age of Google and Alexa, than we were before? As Nicholas Carr wrote in The Shallows, it seems likely that the relentless deluge of information actually makes us more distracted, less capable of attention, and less able to think rigorously or creatively.

The real punch line is that all of this may not matter very much—because technology may be advancing to the point that neither human bodies nor human minds need to be improving in order for economies to grow. Technology’s logic, Gay argues, is driven less by what is good for “ordinary embodied human beings”—his core concern—than what is good for the economy or the state. Steve Austin was enhanced not for his own sake, after all, but in order to produce a better, faster, stronger spy for the government.

Even the “enhancements” we pursue may diminish (or destroy) as many capacities as they grant. Will a warrior in a “mech suit” actually be more physically fit than GIs of 50 years ago? Or will his muscles atrophy once they are mere inputs to cyborg control systems? Likewise, “knowledge workers” may find themselves actually possessing less and less knowledge, let alone wisdom, en route to being supplanted entirely by sophisticated neural nets. And even if a few elite human beings achieve the transhumanist dream of exponential enhancement, how likely is it that most “ordinary embodied human beings” will share in that progress?

Resisting this paradoxical trend of apparent enhancement and actual diminishment will require an alternative vision of what human “betterment” really involves. And this is found, Gay argues, in the extraordinary doctrine of the Incarnation—the radical belief that when God arrived to relieve the human estate, he did so in ordinary flesh.

Of course, Incarnation is followed by the Resurrection, which does indeed feature something like an upgraded human body—even as it still bears the mark of wounds in hands, feet, and side and still consumes simple meals of fish and bread. And then there is the most unlikely Christian belief of all, the Ascension, which teaches that an “ordinary embodied human being” now sits at God’s right hand, reigning and preparing us for his coming again through the ordinary means of bread and wine.

From the resurrected and ascended Christ, we learn that the road to human perfection lies not through technological enhancement but through a voluntary embrace of limits, suffering, and death—and the demonstration of extraordinary love. Can six million dollars make you better at the one thing—love—that “ordinary embodied human beings” are uniquely designed to do?

This will be a minority report for the foreseeable future, as we press on in our quest for “better, faster, stronger.” But maybe the calling of Christ’s body in our technological age is to resist both the enhancement and the diminishment of our embodied lives, all while declaring (and living) a still more excellent way.

Andy Crouch is a partner for theology and culture at Praxis and a former executive editor of Christianity Today. He is the author of The Tech-Wise Family: Everyday Steps for Putting Technology in Its Proper Place (Baker).

Have something to say about this topic? Let us know here.