Fleming Rutledge: John the Baptist Points to the Real Hope of Advent

It would be hard to say which is more alien to our contemporary ideas of getting ready for Christmas, the season of Advent or the figure of John the Baptist—the man who greeted the Pharisees and Sadducees by calling them a “brood of vipers” (Matt. 3:7, ESV throughout). How would you like to get that on a Christmas card?

This unlovable figure is very much out of sync with our times, yet he is one of the foremost figures of Advent, at least in the preaching calendar followed in my own Episcopal Church tradition. Like John the Baptist, Advent is out of phase with its time, with our time. It encroaches upon us in an uncomfortable way, making us feel somewhat uneasy with its stubborn resistance to Christmas cheer. To be sure, we have done a pretty good job of domesticating Advent, and I am by no means above this sort of thing myself. Every year, I used to buy Advent calendars for my children with cute little doors that open and show cute little pictures. I have yet to find an Advent calendar that has a picture of John the Baptist. We really don’t know exactly what to do with him; he doesn’t fit into anything.

But here he is by the river, dressed in the fashion of the wilderness and assaulting the crowds that come out to hear him: “You brood of vipers! Who warned you to flee from the wrath to come?. . . Even now the axe is laid to the root of the trees. Every tree therefore that does not bear good fruit is cut down and thrown into the fire” (Matt. 3:7, 10).

In all four gospels, John the Baptist sets the tone for the proclamation of Jesus Christ. His language is apocalyptic; it signifies the arrival of God. Even if we thought we could fit the baby Jesus into our scheme of things at Christmastime, there is no way to get rid of the recalcitrant figure of John the Baptist announcing “the wrath to come.”

I have an Advent wreath in my dining room, but it does occur to me from time to time that the soft, romantic glow of candlelight fails to do justice to the conflagration announced by John the Baptist. The extremely odd thing about Advent, in spite of its reputation as a season of preparation for Christmas, is that its emphasis really does not fall on the coming of Jesus as a baby in Bethlehem, but rather on the coming of Jesus as the Judge of all things at the end of time.

John does not proclaim Jesus as a captivating infant smiling benevolently at groups of assorted rustics, potentates, and farm animals. Instead, he cries out, “He who is coming after me is mightier than I. . . . His winnowing fork is in his hand, and he will clear his threshing floor and gather his wheat into the barn, but the chaff he will burn with unquenchable fire” (Matt. 3:11–12).

A characteristic liturgical petition of Advent is Maranatha—come, Lord Jesus! It is certainly not a prayer for Jesus to come again as a helpless baby; it is the longing cry of God’s people for him to return in power and glory, when “every knee should bow, in heaven and on earth and under the earth, and every tongue confess that Jesus Christ is Lord” (Phil. 2:10–11).

Why do all four Evangelists introduce their gospels with John the Baptist? What is the purpose of making everyone’s hair stand on end during Advent? It has occurred to me that the image of Jesus as the cosmic Judge who will ultimately come again to put an end to all sin and wickedness forever is not so frightening to the poor and oppressed of the earth as it is to those who have a lot to lose.

If your loved one is in the habit of buying you expensive Christmas gifts, you might not be so crazy about the idea of Jesus coming back before Santa Claus gets here. But suppose you had been a Christian in prison in the Soviet Union. Or suppose you had been a black person in Apartheid-era South Africa directed to pack up your meager belongings and take them to a so-called homeland that wasn’t your home and that wouldn’t offer you dignified employment. Suppose you were elderly and handicapped in the South Bronx and had just been robbed and terrorized for the third time. In circumstances like those, you might say Maranatha and really mean it. 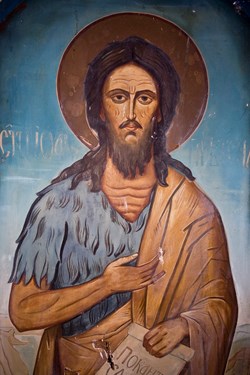 Even today, John the Baptist’s lonely, austere style of life bears witness to a reality that is coming, a reality that will expose all worldly realities, all earthly conditions, all human promises as fraudulent and transitory. His appearance on the scene at this time of year exposes our pretensions for what they really are. Never have we needed him more!

When John the Baptist—probably the most single-minded person who ever lived—said, “Repent, for the kingdom of heaven is at hand” (Matt. 3:2), his whole being, his entire existence, was on fire with the reality of the One Who Comes. He was in the grip of what I call apocalyptic transvision—that vision given to the church that sees through the appearances of this world to the blazing power and holiness of the coming of the Lord. John the Baptist is the ultimate embodiment of the apocalyptic character of Christian faith—faith that is oriented not to the past but to the future, not to the repetition of religious exercises but to the person of the Messiah, not to arrangements as they are but to an utterly new authority and dominion.

A Power from Outside

In the most extraordinary way, John is truly our contemporary; he stands at the very precipice of the collision of two forces, at the juncture where the world’s resistance to God meets the irresistible force of the One who is coming—“the axe is laid to the root of the trees.” There he is, and there he will be until the trump sounds, forever summoning us to rethink and reorder our lives totally, orienting ourselves to an altogether new perspective—the perspective of God.

Consider the way God sees us: Does he care if I have a matched set of Gucci luggage? Will he judge me by the degree of recognition given to my name when it appears in the playbill or on the letterhead or in the list of trustees and patrons? Will he even judge me by my performance as a mother or a husband or a friend or a neighbor? What will he judge me by?

As John preaches, “Every tree that does not produce good fruit will be cut down and thrown into the fire.” So the criterion of judgment is the fruit that is characteristic of repentance. And repentance does not mean just being sorry. We experience this when we hear a person say “I’m sorry” once too often, and we explode with anger and frustration and say, “I’m sick and tired of hearing that you’re sorry! I don’t want you to be sorry! I want to see some changed behavior!” The Greek word metanoia means to turn around, to reorient oneself in another direction. It means to receive a new start altogether.

If I am told over and over to repent, to change, to orient my life to God, nothing will ever happen. I will cling to the Gucci luggage—not that I could afford it—and the earthly status symbols more desperately than ever. I don’t need to hear exhortations to repent. I need power from outside myself to make me different.

In his Pensées, Blaise Pascal wrote, “Comfort yourselves. It is not from yourselves that you should expect grace; but, on the contrary, it is in expecting nothing from yourselves, that you must hope for it.” Exactly. That is the place where a repentant person takes up his or her position on the frontier of the ages. No previous commitment or identity will have any ultimate meaning; no human ancestry or allegiance, no ranking or claim, will be of any consequence, for, as John the Baptist instructed the religious elite, “Do not presume to say to yourselves, ‘We have Abraham as our father,’ for I tell you, God is able from these stones to raise up children to Abraham” (Matt. 3:9).

A power from outside is coming, a power that is able to make a new creation out of people like us, stones like us, people who have no capacity of ourselves to save ourselves. The power that is coming is not our power—not the power of our deeds or our inner strength or our spiritual discipline or our faith or even our repentance. It is God’s power that gives good deeds and inner strength and spiritual discipline and faith and repentance. We are able to repent and bear fruit because he is coming.

These changes have political consequences as well as individual ones. Repentance will mean seeking after the good of all, not just the comforts of a few, and the knowledge of the coming of the Lord means that there will be hope—in the light of his power—of his intervention in the affairs of nations, that the efforts of the peacemakers will somehow, miraculously, be blessed.

The Preacher Is Nothing

John the Baptist is the model Christian preacher and witness. By the grace of God alone, all Christian preachers stand in the line of this strange, unattractive man. During the Advent season, we shine a spotlight on his preaching. But the spotlight is not, in fact, on the preacher. John himself is the spotlight. When we watch someone preach on stage, we don’t actually see the spotlight. What we see is the beam of light and the object that is illuminated. John himself disappears. The preaching is the beam, and the light falls on Jesus only.

Yet even this simile fails us, because, as the Fourth Evangelist writes, “There was a man sent from God, whose name was John. . . . He was not the light, but came to bear witness about the light” (John 1:6, 8).

Fleming Rutledge is an Episcopal priest and a bestselling author. This article is adapted from a sermon republished in her book, Advent: The Once & Future Coming of Jesus Christ (Eerdmans).

Are we right about this? Off the mark? Share your feedback here.

Fleming Rutledge: John the Baptist Points to the Real Hope of Advent

Fleming Rutledge: John the Baptist Points to the ...