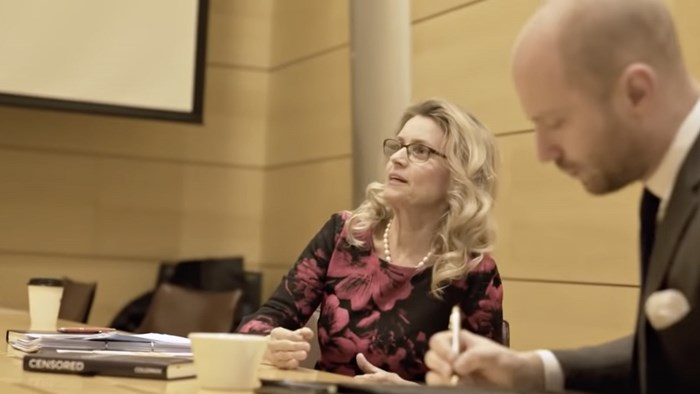 Image: Screengrab / Alliance Defending Freedom YouTube
Päivi Räsänen, a parlimentarian, consulting with lawyers. She expects the case against her to be appealed.

Helsinki district court judges have dismissed hate speech charges against a Finnish politician who tweeted out Bible verses and the bishop of the Evangelical Lutheran Mission who published a pamphlet on gender roles.

In a unanimous decision, the judges ruled on Wednesday that Päivi Räsänen, a parliamentarian who faced a potential sentence of 120 daily fines, said things that were “partly offensive, but not hate speech.”

In a related decision, Bishop Juhana Pohjola, who faced a potential 60 daily fines, was found “not culpable” for the publication of Räsänen’s 23-page booklet, Male and Female He Created Them.

The ruling is being hailed as a victory for free speech and freedom of religion by Räsänen and her supporters.

“I greatly appreciate that the court recognized in its ruling the importance of free speech. I hope that this ruling will help prevent others from having to go through the same ordeal,” she said. “This has been my honor.”

The judges found that the purpose of Räsänen’s writing was not to insult or harm LGBT people but to defend what she believed to be the biblical concepts of family and marriage. In its decision, the court said that Räsänen’s comments included both value judgments and factual statements that might be considered offensive, but the statements did not amount to “incitement to hatred,” and should thus be considered legal.

Significantly, the court also stated in its decision that it is not its job to interpret biblical concepts. Under Finnish law, the judges said, they are not able to determine whether a particular interpretation of a scriptural passage is correct.

Though both the prosecutor and judges stated from the outset that the trial was about rights and freedoms—not biblical interpretation—the Bible played a prominent role in the courtroom.

According to Finnish media, both parties cited biblical texts so frequently that the court’s chairman had to remind them that the judges would decide the case on the basis of Finnish law and not Christian Scripture.

The Evangelical Lutheran Mission is independent from the national church. It formed in 2013 and has about 2,000 members. Most Finns are members of the national church, though membership has declined from nearly 90 percent of the population to about 67 percent in 2020. The No. 1 stated reason for leaving in recent years has been conservative statements about homosexuality and same-sex marriage.

More than 70 percent of Finns support same-sex marriage, which has been legal in the country since 2017. Many see defending the dignity of LGBT people as the critical civil rights issue of the day.

Räsänen has warned the ruling could set a precedent across Europe and around the globe, as many nations consider whether the human rights of minorities require new restrictions on free speech and limits on freedom of religion. She urged the court to carefully consider “the interrelationship between different fundamental freedoms.”

LGBT advocates were more equivocal about the verdict’s significance, on the day it was handed down. It is not yet clear, they say, how the court’s rulings will be used to evaluate the harm done by religious speech.

Kerttu Tarjamo, secretary general of the LGBT rights organization Seta, was encouraged that the court agreed that “Räsänen’s public opinions regarding gay people are deeply offensive to many persons belonging to sexual minorities.”

According to Tarjamo, the trial signaled that hate speech against LGBT people is being taken more seriously in Finland and the court’s decision “does not mean that freedom of expression or freedom of religion can be freely used to justify discrimination or hate speech.”

Not all hate speech is punishable under Finnish law, Tarjamo said, but offensive statements can be considered harassment and the national non-discrimination act could be revised to include statements that target groups of people, and not just individuals.

Despite the unanimous verdict, prosecutors may go to a higher court. Speaking to reporters, prosecutor Mantila said it is highly probable that the case submitted to the Court of Appeals.

Räsänen and Pohjola, though they are celebrating today, have said they expect the fight for the right to express their beliefs will have to go all way to the European Court of Human Rights.

Christian Condemnations of LGBT Not Hate Speech in ...