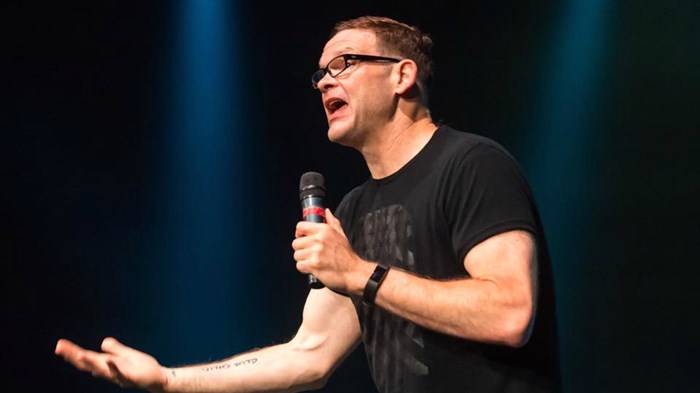 Pastor Perry Noble’s former megachurch isn’t ready to give him a second chance. So he’s giving himself one.

A year after firing Noble over his alcoholism, South Carolina multisite NewSpring Church continues to deem its founding pastor unfit to be restored to the pulpit. But that hasn’t stopped the 46-year-old preacher from guest speaking at more than 10 other congregations—and recently filing paperwork to start his own.

Noble, who has been working as a church growth consultant and says he has been sober for nearly a year, registered Second Chance Church in South Carolina last month, watchdog blogger Warren Throckmorton reported.

“I am able to confirm that the paperwork has indeed been filed for a new church in South Carolina—that is a matter of public record,” Noble’s assistant told CT. “However, no timeline has been set for the church. Perry is dedicated to his clients at The Growth Company, and serving them well.”

Meanwhile, leaders at NewSpring—which spans across 15 locations in South Carolina—recently reiterated their concerns. They addressed his appearances at other churches, such as Steven Furtick’s Elevation Church in neighboring North Carolina, at an event in late July. They declined to directly comment on Noble’s new church venture.

“We have been asked why Perry can preach at other churches but not at NewSpring,” said teaching pastor Clayton King. “We cannot speak for other churches and how they make decisions. For us, Perry currently does not meet the biblical qualifications of a pastor, teacher, shepherd.”

King listed 1 Timothy 3:1-5, Titus 1:5-9, and James 3:1 among their guidelines for the pastorate. He assured the congregation that the pastoral staff at NewSpring forgives Noble, though they won’t be inviting him back.

Noble responded to the discussion in a Facebook live video, taking issue with what he saw as a misrepresentation of his 16-year ministry there.

“There may be quite a few things I did wrong as senior pastor of NewSpring Church; however, I preached Jesus every Sunday that I had the privilege to serve at NewSpring Church,” he said. “They can continually talk about my sins. They can talk about how I’m seemingly unrepentant—although I would say in order to determine if someone is repentant, you have to have a relationship with them because it’s hard to call out repentance from the cheap seats—but while I will allow those things to go on, I will not allow anyone to talk about my motives for ministry.”

In recent years, plenty of popular pastors have had very public departures from their pulpits over moral issues—such as substance abuse, adultery, financial mismanagement, and toxic leadership. These fallen pastors have left their churches to decide when, if ever, they can be restored to leadership; whether to forgive and move on, or to disqualify them from public ministry.

One pastor addressed this dilemma in a CT article, concluding:

The fallen minister who confesses sin, seeks God’s grace, and desires to remain in fellowship with the church of Christ, must be welcomed and received as any fallen Christian. He must be forgiven as Jesus commands (Matt. 18:22). But forgiveness and restoration to the fellowship of the church does not mean the former minister now meets the qualifications for holding the office of pastor/elder.

The church is not to punish the repenting man who has fallen. But refusing to return him to the role of pastoral ministry is not punishment. To remove a fallen minister is to honor Christ’s holy standards; it is to follow the wise counsel and pattern of leaders over the centuries; it is to protect the man himself and his family; and it is to guard the church body, loved so dearly by the Chief Shepherd.

From the outset, Noble has not denied his missteps. He said NewSpring “made the right decision” to fire him.

“This was a spiritual and moral mistake on my part as I began to depend on alcohol for my refuge instead of Jesus and others,” he wrote before spending a month in a rehab facility in Arizona last summer.

Nearly 1 in 5 pastors has struggled with drug or alcohol addiction, according to a 2015 survey by Barna Group and Pepperdine University. Those pastors were relatively split on whether being open about their own addiction would have a negative (46%) or positive (41%) impact on their ministry.

Noble revealed just how low things got for him in a July 9 Facebook video entitled “The Day I Decided Not to Kill Myself.” After being fired and separating from his wife, he had planned his suicide while in rehab. He says a message from God convinced him not to take his own life. “It was the clearest I've ever heard his voice,” Noble said. “He told me, 'I'm not finished with you yet.’”

The South Carolina pastor and Waffle House regular has been active on social media for the past several months. He tracks his own progress in recovery, his 30-pound weight loss, and his work coaching and speaking at other churches. Within six months of leaving NewSpring, Noble faced criticism for returning to ministry too soon, saying, “If God has put something in your heart, don't sit around and wait for the approval of people who don't believe in you in the first place.”

Much of his recent messaging emphasizes his own imperfection and God’s grace.

He thanked one church for “allowing this unqualified guy to preach there,” as well as messages about how “in Christ my past does not have to define my future” and “we have not ‘out-sinned’ the price Jesus paid.”

Noble has not mentioned Second Chance Church on social media. He is keeping busy with his venture, The Growth Company, and posted that he is booked with the exception of a handful of fall dates. His Twitter banner proclaims, “The best is yet to come.”

NewSpring announced that rather than hire a senior pastor to replace Noble, the church will list Jesus Christ as its senior pastor and share leadership among multiple pastoral teams and campus pastors.

On Facebook, Noble confirmed that he has declined regular invites to meet with King over the past year, but it has been several months since he has heard from other staff members at NewSpring.