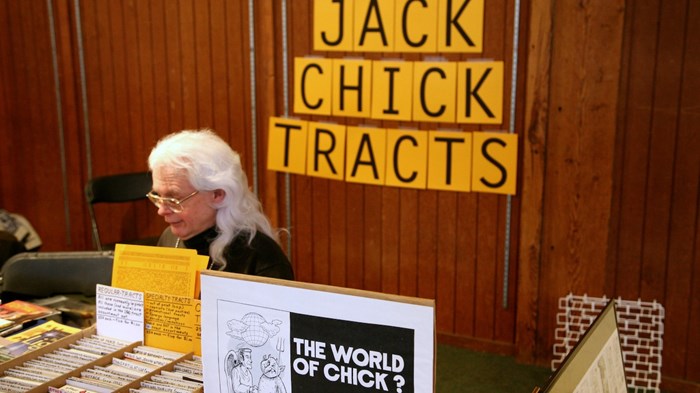 Jack Chick, the cartoonist who wanted to save your soul from hell, died Sunday at age 92.

The biggest name in tract evangelism, Chick distributed more than 500 million pamphlets, nicknamed “chicklets,” over five decades. His signature black-and-white panel comics warned against the dangers of everything from the occult to Family Guy. 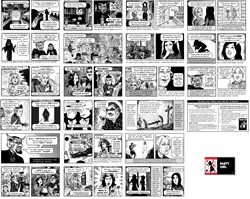 Chick’s messages were controversial—including among evangelicals—but his work enjoyed a global reach. His most popular tract, This Was Your Life!, was translated into more than 60 languages.

Chick came to faith shortly after World War II through Charles E. Fuller’s radio show, “Old Fashioned Revival Hour.” The former technical illustrator began drawing and funding his first comic books and pocket-sized tracks in the early 1960s, according to Christian Comics International. Chick Publications grew to start its own print shop, and took off in the ’70s.

His evangelistic furor was inspired by sermons from revivalist Charles Finney, whose theology continues to underline Chick’s tracks, according to researcher Daniel Silliman. He quotes Chick as saying, “When everything is caving in, and when the world laughs at the church, that’s when we need revival…. Christians are self-satisfied and complacent. God’s got a handful of people out there who really mean business, but the rest are playing games.”

Among comic artists, Chick rose to a level of fascination as one of the bestselling underground publishers in the world. Early news of his death on the site Boing Boing launched Chick’s name as a national trending topic on Twitter on Monday afternoon.

In the late 1990s, a media watchdog site described the secular fascination with Chick: “To some, Chick tracts are American folk art, or even a form of religious pornography, titillating and somewhat dangerous. Chick is the ultimate underground artist: single-minded and self-published, passionately committed to his message without regard for external social forces.”

Chick’s 150-plus tracts center around distinguishing the “saved” from the “lost,” the latter represented by various culture war targets over the years.

“Despite claims to eternal truths, tract subjects are frequently chosen in response to contemporary trends and ideas,” said scholar Martin Lund in the book Comics and Power, “references to communism have vanished from Chick’s post-Cold War output, and eight of the twelve ‘Islam’ tracts were published after 2001.”

Chick consistently called out Catholics in his tracts, which represent a sense of “atavistic anti-Catholicism” among certain evangelicals, Mark Noll and Carol Nystrom wrote in Is the Reformation Over?.

For example, in the tracts Last Rites and Are Roman Catholics Christians?, Chick refers to the Catholic church as “the great whore” and Jesus tells a Catholic character, “Her false teachings are why you are going to the lake of fire.”

In the 1980s, a CT investigation “exposed as a fraud” Chick’s Alberto, a comic book that purported to be the “true story” of a Jesuit priest whose job was to “infiltrate and destroy” Protestant churches. The book was popular enough to inspire a sequel. But it also “caused such a fuss that many bookstores have refused to sell it,” CT reported in March 1981.

In its profile of Chick as a pioneer, Christian Comics International notes:

Christian comics creators have also expressed divided opinions about Jack and his work. A number have wished that he was truly accountable to someone with regards to the content of his tracts, but still do believe that he has always meant well. Some have expressed frustration that his books seemed to make comics so distasteful to the Christian bookstore market, making sales more difficult for later publications.

One of the frequently asked questions on Chick’s site is, “Why preach against false religions? Why not just preach Jesus?” His site’s response, in part:

Here is why: God said, “When I say unto the wicked, Thou shalt surely die; and thou givest him not warning, nor speakest to warn the wicked from his wicked way, to save his life; the same wicked man shall die in his iniquity; but his blood will I require at thine hand." Ezekiel 3:18. It's not hard to see that God requires us to speak up, even if it is unpopular.

Chick tracts, in addition to being a collector’s item for comic enthusiasts, seem like a relic in a new era of evangelicalism. Many evangelicals now view tract evangelism as shallow outreach compared to relationship-building. As one pastor told CT in 2011, “I don't see how such a message can be conveyed in a way that is bound to be received as aggressive, hostile, or dismissive. Nor do I see how tracts or impersonal witness is adequate to our message.”