Theology Feud Pits Half of Town's Protestant Churches Against Another

Coordinated sermon series against ‘progressive Christianity’ seeks to ‘demonstrate the unity of the body of Christ.’
Bob Smietana|May 18, 2015 01:26 PM 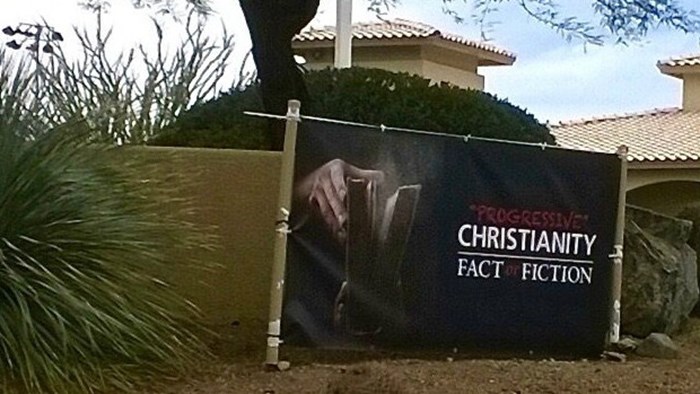 A feud over theology has led an unusual ecumenical project in a small Arizona town.

Eight churches—including Baptist, Lutheran, Presbyterian, and non-denominational congregations—in Fountain Hills have teamed up for a campaign of public banners and sermons aimed at the theology of a nearby Methodist church.

The sermon series—“Progressive Christianity: Fact or Fiction?”—was launched with an op-ed and half-page advertisement in the local newspaper, and promoted with banners at the eight churches involved.

One described it as a “landmark series” and an “unprecedented step” that “demonstrate[s] in a very real way the unity of the 'body of Christ' in Fountain Hills.” Another stated, “Imagine Baptists united with Lutherans working side-by-side with Presbyterians, all while holding the raised hands of charismatics.”

It’s the latest salvo in a months-long war of words over theology in the town of about 23,000, located about half an hour outside of Phoenix. Fountain Hills has approximately 15 Protestant churches.

At issue: the topic of “Progressive Christianity,” taught at The Fountains, a United Methodist church. That church’s pastor, David Felten, is known for supporting LGBT rights and progressive theology.

Felten’s views—which include rejecting doctrines like the Virgin Birth—and his participation in a visit to a local mosque have become the topic of fierce debate in the local newspaper.

Don Lawrence, pastor of Christ’s Church of Fountain Hills, accused Felten of rejecting traditional Christian belief and of being intolerant.

“Although he has the right to believe or disbelieve what he will about the Virgin Mary, does his ‘tolerance’ allow him to throw stones at others simply because they believe differently than he?” he wrote to the Fountain Hills Times. “His hypocrisy is clear for all to see.”

“The progressives are at it again, and for a small fee you can join the primary proponent of this apostate religious movement to get answers,” he wrote in a letter to the editor.

The new sermon series doesn’t mention The Fountains by name, but does seem aimed at Felten’s congregation. It’s made headlines for the public nature of the dispute between churches.

Felten told a local television station that his church offers an alternative to "fundamentalist" Christianity and is the only progressive church in town. Church leaders noted in a blog post that the publicity around the sermon campaign has helped their cause.

“Our strategy is to not be defensive or argumentative, but to keep articulating the positive attributes of Progressive Christianity and always err on the side of grace as we move ahead,” they wrote.

Bill Good, pastor of Fountain Hills Presbyterian Church, said those who promote a progressive form of Christianity are undermining the Christian faith.

"There are some half-truths and untruths coming out and that are not helpful to folks that are trying to find their way to Jesus Christ,” he told Fox 10 in Phoenix.

Rick Ponzo, pastor of Calvary Fountain Hills, wrote on his church blog, “Since the enemy does not have the ability to keep Christians out of heaven, the next best thing is to render them useless on earth, keeping them from sharing the truth with others. Progressive Christianity is one of the tools the enemy uses to achieve that goal.”

Pastors involved in the sermon series see it as an act of Christian unity to promote the gospel.

“Other pastors or churches will not be denigrated; the goal is to simply illuminate the truth of the gospel message and let it do what only it can do,” says a message on the Fountain Hills Presbyterian website.

United Methodists and other mainline Protestants are split between those who identify as “born-again” or evangelical and those who do not.

Just under half (45%) of Methodists would describe themselves as born-again or evangelical, according to new data from the Pew Research Center. A similar number of Presbyterians (42%) also say they are evangelical, along with a third (33%) of Lutherans.

By contrast, three quarters (75%) of Baptists and non-denominational Christians (78%) consider themselves evangelicals.

CT has regularly noted how mainline Protestants have increasingly split over theology, including Methodists, Presbyterians, Lutherans, and Episcopalians.

Editor's Note: This post has been updated, with a clarified comment from Felten to Fox 10 in Phoenix.

Theology Feud Pits Half of Town's Protestant Churches Against Another