Withdrawal of church representatives failed to force compromise.
Jayson Casper in Cairo|November 30, 2012 08:30 AM 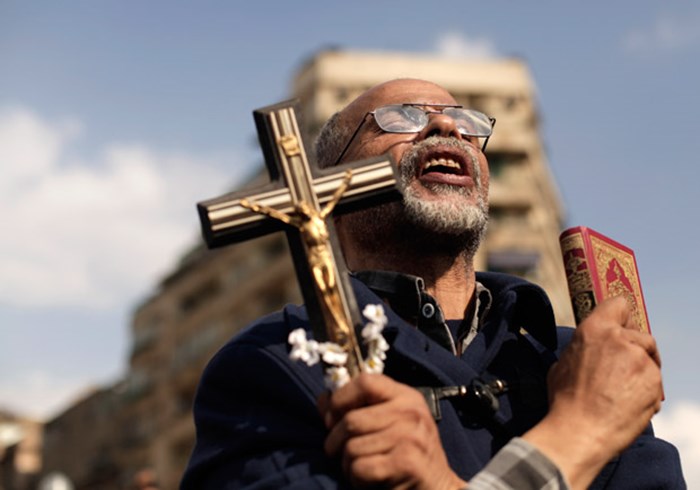 Amid public outcry against his decision last week to grant himself immunity from judicial review, Morsi praised the constitution's speedy completion as a necessary step in order to end the nation's transition to democracy and reestablish separate executive, legislative, and judicial authority.

He also dismissed questions about the legitimacy of the document, especially given the withdrawal of Christian and many liberal members of the assembly drafting it.

"The withdrawal of the church from the constitutional assembly is nothing to worry about," Morsi said. "It's important to me that they be part of it, but not to worry."

"We did not mean to stop everything by withdrawing," said Safwat el-Baiady, president of the Protestant Churches of Egypt and a former member of the constitutional assembly. "Only to show our distaste."

While most articles in the constitution suffered little controversy, the Islamist-dominated assembly limited or qualified previously guaranteed personal freedoms. It also tinged the document with a religious flavor, assuring law and liberty are compliant with shari'ah. (A summary of the new religion-related articles can be found here.)

Baiady has no objection to preserving the controversial Article 2—which establishes the principles of shari'ah as the main source of Egyptian legislation. (In the past, the Supreme Constitutional Court has acted as arbiter to interpret these principles very broadly.) Yet a new addition (Article 219) specifically defines shari'ah according to traditional methods of jurisprudence crafted in the early centuries of Islam. This does not compel a legal return to the Middle Ages, but does require more complicity with the heritage, as opposed to amorphous "principles," of shari'ah law.

This development troubles Baiady. "But I don't want to concentrate only on one article."

Instead his focus is on Article 4, which shifts shari'ah interpretation away from the Supreme Constitutional Court entirely. Instead, it requires lawmakers to consult senior scholars at Cairo's Al-Azhar—one of Sunni Islam's top centers of learning—on all matters pertaining to religion.

"Both the church and Al-Azhar should be under the state and not have a supervisory role above it," Baiady said. "I respect the Grand Imam, but I do not want him to have authority over the state and its laws."

Article 3 enshrines the right of Egypt's Christians and Jews to manage personal and religious affairs according to their own religious laws. The article also gives them independence in choosing their leaders.

Though this addition appears to support Christians, Baiady is not pleased. "We should have said 'non-Muslims' have this right," he said. "Even if this gives us our rights, it comes at the expense of others. It also adds nothing we did not have before."

Jews and Christians previously benefitted from this allowance in Egypt's regular legal codes. But with the current focus on shari'ah—which guarantees the privilege—these rights are upgraded into the constitution.

Similarly, freedom of religion is not universal. Article 43 limits the right of religious practice and building houses of worship to the "heavenly" [Abrahamic] religions alone.

While Article 43 does guarantee freedom of belief, and Article 45 guarantees the freedom of thought and opinion, Article 44 forbids the insulting of prophets. Though previously codified in Egyptian law, blasphemy is now poised to be banned at the constitutional level.

Interestingly, Article 31 tasks the state and society with protecting the dignity of the "person," forbidding that anyone be insulted.

The idea of societal responsibility was an area of deep concern for Baiady—one where he believes the withdrawal of church and liberal representatives from the constitutional assembly successfully nudged remaining members toward the church's perspective. Previous drafts of the constitution included a role for society in safeguarding "public morality and ethics," raising fears of Saudi Arabia-style religious police. Preserving "a high standard of education, religious, and national values" is still included under Article 11, but it is now the sole propriety of the state.

Even so, both state and society are charged with preserving "the essential nature of the Egyptian family" in Article 10. The state must also "balance between the duties of a woman to her family and her public work."

Despite Morsi's lack of worry over Christian concerns about the constitution, he asserted in the televised interview that Muslims and Christians have the same rights, love each other, and are one people. He claimed he has heard nothing of Christian fears toward Islamist rule.

Though the date has not yet been defined, this constitution will likely soon be put to the people in a national referendum. Islamists appear keen to give it popular legitimacy—assuming it passes—before the courts have an opportunity to void the assembly over any number of legal challenges.

"We will have to see the reaction of society," said Baiady.