Seventeen percent of evangelical women between the ages of 15 and 44 have had sex with another woman, according to data gathered by the Centers for Disease Control and Prevention (CDC) and analyzed by Grove City College sociology professor David Ayers. Among evangelical men, the percentage who’ve had sex with other men hovers around 5 percent.

The CDC surveyed about 11,300 people about sex, sexual health, and attitudes and preferences. More than 1,800 of those people were evangelical, as defined by their denominational affiliation. Looking at that subset, Ayers, the author of After the Revolution: Sex and the Single Evangelical, was able to determine that roughly 1 percent of evangelical women identify as lesbian and about 5 percent say they are bisexual. Among evangelical girls aged 15 to 17, more than 10 percent identify as bi.

“Why are so many younger evangelical females today open to sex with other women?” Ayers asks in American Reformer. “The simple biblical teaching that all sex outside of marriage between one man and one woman is sinful is hardly secret or subtle. ... And yet, among younger people especially, it has been quite a few years since biblical beliefs and practices have been the norm among evangelicals.” 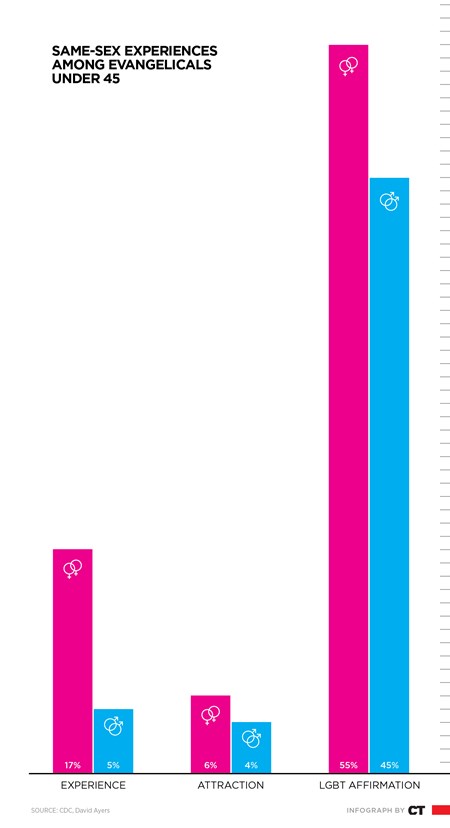 @Danielsilliman
This article is from the November 2022 issue.

More Evangelical Women Have Had Sex With Women ...