I Used to Run with Drug Addicts and Prostitutes. Now I Share the Gospel with Them.

My journey from life on the streets to life in Christ.
Sharon Dutra|November 22, 2021
Image: Photo by Mikaela Hamilton

I was born in Los Angeles to a family in turmoil. My father was an alcoholic and a womanizer, and he was married four times by the time I was 17. My mother left when I was about 5 years old, and I never saw her again.

Throughout my childhood, I was moved from foster home to foster home. I started using drugs when I was 13. I believe that’s when I finally realized that I hated myself. Up until then, I had been able to ignore my feelings of worthlessness and the ongoing sting of rejection and abandonment.

At 15, I ran away from home, living on the streets until I was arrested. Thus began my life with the law.

At first, I ended up at Eastlake Juvenile Hall in Central Los Angeles (a facility to which I would return several times). Murderers, thieves, and gang members were lumped together with those who had only run away from home. As a white girl with long, blond hair, I immediately felt out of place.

Eventually, I was transferred to Florence Crittenton, an open-placement girls’ home in East Los Angeles. Leaving the grounds was against the rules, but there were no bars or walls to prevent it. During that time, I would ride buses across Los Angeles at night, unaware of the potential danger. Pimps, predators, and gangsters abounded in many neighborhoods.

But I was too restless to stay anywhere for long. After running away from the girls’ home for the third time, I was arrested again and sent back to juvenile hall. At this point I was a ward of the court, since my father and stepmother had divorced, neither wanting to take me in.

The court placed me in a closed facility in Central Los Angeles called the Convent of the Good Shepherd. The neighborhood was so unsafe we had to move our beds away from the windows on holidays, because gang members had shot through them in the past. The convent walls were 12 feet high. But I even ran away from there, climbing onto the roof of the laundry building and crawling up the ivy to escape.

With each getaway, my self-hatred escalated, along with contempt for authority figures and mistrust of people in general. I was headed down a path of destruction.

At age 19, I started working for the California Conservation Corps. One of our responsibilities was to serve meals to firefighters and prisoners as they fought major fires. This is where I met a man I’ll call Bill, who was serving a prison sentence in Yreka, California. We wrote letters back and forth for months, and when he was released, we moved in together. Later, we married and had two children.

At the time, I was drinking heavily and smoking pot. For years, I had used every drug I could get my hands on. But little did I know that Bill was using cocaine and speed intravenously. And it didn’t take much to get me doing likewise. I would spend the next six and a half years with a needle in my arm, racking up four near-death experiences when I overdosed.

Needless to say, I lost all interest in working and taking care of my kids, my husband, or my apartment. Over time, my veins were so scarred from injecting myself that I started shooting in my hands and feet. On several occasions, I even had another stoned addict shoot drugs into my neck veins, which risked sudden death. Of course, none of this was remotely fun—I was just trying to deaden my pain.

Bill and I divorced less than a decade later. We had tried getting sober, but we didn’t know who the other person was without the drugs. After a six-month attempt at sobriety, I abandoned my family and headed straight for the streets so I could continue feeding my addiction. I never imagined that I would end up homeless for two years, looking every bit like the proverbial bag lady. During this period, I hung around a dangerous neighborhood, venturing into the projects at night looking for drugs. I occasionally scoured garbage cans for food, but usually I just sold my body so I could survive and maintain my drug habit.

I certainly had a death wish. Twice, guns were pulled on me, and once I told the attacker, “Shoot me and put me out of my misery.” I even attempted suicide on several occasions. But miraculously, I survived every close call. 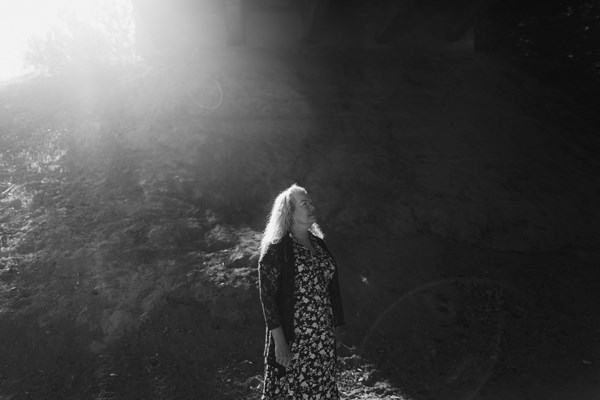 Water in the desert

By age 29, I had been arrested 13 times. One morning, when I was trespassing on Fort Ord, then an Army base near Seaside, California, six military police cars arrived, and a Seaside Police sergeant came busting through the door. Because of my lengthy criminal record, I was sent to a women’s prison in Southern California, where I already knew some of the inmates from my time on the street.

Crowded by pairs into tiny cells in the receiving unit, we were on lockdown 23 hours a day, 7 days a week, so there was no privacy. Very few inmates were allowed out of their cells to work.

But God was preparing another miracle. My cellmate worked in the kitchen, which gave me significant alone time. While she was away, I started reading Al Capone’s Devil Driver, a book about the mob boss’s chauffeur. This man had killed many people and landed in prison, where he ultimately became a born-again Christian.

At the time, I wasn’t even looking for God. All I knew was that I wanted to die. My whole life had been an unbroken stretch of misery, and the pain was unbearable. After finishing the book, I realized that God was exactly who I needed. I got on my knees and cried out to him for over an hour, weeping for all the wrongs I had done. When I got up off the cell floor, I was a brand-new person.

After being placed in the general prison population a few weeks later, I immediately went to church. The chaplain befriended me and bought me an expensive Bible. I read it for hours every day. After a lifetime derailed by destructive lies, finding God’s truth felt like discovering a cool stream in the desert.

The Scriptures spoke wholeness and hope to my heart. At first, I could hardly fathom that Jesus would love a sinner like me, much less that my sins were totally forgiven. But the more I read, the more the Holy Spirit confirmed the shocking reality of the gospel. I drew special encouragement from Joel 2:25, which speaks of God “repay[ing] you for the years the locusts have eaten.”

Soon enough, I found myself wanting to share Christ with others in prison. So I began leading worship songs and eventually teaching Bible studies.

After my release, I had to go back to my hometown of Santa Cruz, California. But the only people I knew there were drug addicts and prostitutes. I wondered why God had returned me to this kind of environment. How would I overcome my reputation there? But God graciously gave me many opportunities to witness to those I had run with.

Eventually, I returned to school and received my registered nursing degree. I also married the son of a California Highway Patrol captain, and together we started a ministry that helps people come to know Jesus and disciples them in the Christian faith. For decades now, I have written Bible studies and taught them to diverse groups of women—some lifelong Christians, others fresh off the streets or recovering from addictions.

After so many years on the run—from home, from authority, from life itself—I praise God for giving rest to my weary soul. No life is too broken for God to heal. I am living proof.

Sharon Dutra is the cofounder of Be Transformed Ministries. Connect with her at betransformedministries.com.

Tags:
Addiction and Recovery | Bible | California | Conversion | Homelessness | Jesus | Law Enforcement | Prisons | Prostitution | Race and Ethnicity | Testimonies
Issue:
December 2021, Vol. 65, No. 9, Pg 80, "When I Was Homeless, You Took Me In"
More From: Sharon Dutra
This article is from the December 2021 issue.

I Used to Run with Drug Addicts and Prostitutes. Now I Share the Gospel with Them.

I Used to Run with Drug Addicts and Prostitutes. ...