The Kenyan Presidential Election Is Over. The Conversation About Christians and Politics Has Just Begun.

William Ruto credited God and church leaders for his victory. Should this be the model?
Morgan Lee|September 7, 2022 02:00 PM 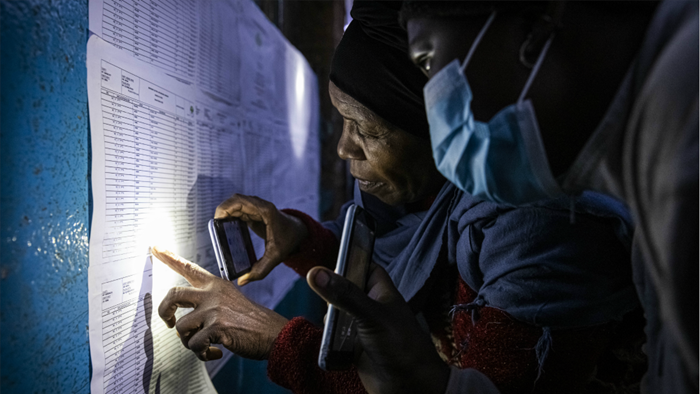 “We have worked hard,” the outgoing deputy president told his supporters after the Supreme Court ruled he won the presidency, defeating five-time challenger Raila Odinga. “But as the Bible teaches us … some trust in chariots, some trust in horses, but we trust in God.”

In another victory speech, Ruto credited the many pastors who opened their pulpits to him, accepted donations from his campaign, and urged their congregations to pray for his electoral triumph.

“I have been prayed into victory,” Ruto said.

But as the nation wrestles with the results of the contested election and fallout from the monthlong dispute over the legitimacy of the results, Christians in Kenya are left reflecting on the role believers should have in the fraught political system. Christians make up nearly 90 percent of the population. How should they push for their preferred policies, participate in the political jostle of a campaign, and work to prevent the violence that has too often followed national elections?

Few spoke out against one-party rule

Church leaders, like the rest of Kenya, are still adjusting to a multiple-party system. The nation achieved independence from Great Britain in 1963. But before the decade was out, all political power had been consolidated into a single party. The second president, Daniel arap Moi, stayed in power for nearly 25 years. He has been praised by some—including Ruto—for providing stability, but also accused of human rights violations and called a dictator.

Christians occasionally criticized Moi during his long presidency, but their voices were generally muted. Most supported Moi, even when they disagreed with particular decisions.

“The president was perceived as a benevolent friend of the church, himself being a committed member of one of the larger mainstream denominations—the African Inland Church,” said Wilson Kiuna, who heads a leadership program at Hesabika Trust, an organization supporting Christians in public service.

A few Christian leaders took strong stands against Moi. That agitation came at a cost, and Christians in Kenya are still divided over what to think about their examples.

“The suppression against these voices was so intense that those who engaged in the fight were few and pronounced,” said George Ogalo, the chief operating officer at International Fellowship of Evangelical Students (IFES). “Church leaders who confronted the government of the day were considered by the majority of Christians as being too political and deviating from their core mission as shepherds of the church.”

Since Moi left office in 2002, Christians have gotten more involved in the day-to-day debates over politics and policy. Many were drawn into political debates by a constitutional referendum in 2005—when two of Kenya’s largest Christian groups focused on different priorities and ended up on opposing sides.

The next year, a group of evangelical and Protestant leaders came together and launched their own party, the Agano Party, demonstrating that at least some Christians were interested in a new approach to politics in Kenya. Not many, though. In this year’s election, David Mwaure, the Agano candidate, only earned 0.2 percent of the vote. (Another Christian, gospel musician Reuben Kigame, submitted presidential nomination papers but did not make it on the ballot.)

Then in 2007, Odinga lost his second bid for the presidency but claimed the election was unfair. He made allegations of fraud and called for nationwide protests. His aggrieved supporters clashed with police and paramilitary forces, and more than 1,000 people were killed. Four churches were destroyed in the riots—including one in an attack that killed 50 people—but many in Kenya placed the blame on the pastors themselves.

Responsibility for catalyzing violence is disputed, but there’s no question that the crisis hurt the witness of many Kenyan Christians. The churches, at minimum, were unable to overcome ethnic divisions or prevent believers from attacking other believers.

“At first, leaders spoke like there was nothing wrong,” said one church leader in the Nyanza province who asked not to be named for his own safety. “When they should have spoken the truth, they kept silent, and some of them spoke too late.”

“I remember meeting Peter Mwangi, a young man from my neighborhood, whose family was affected by violence,” said William Kiptoo, the peacebuilding coordinator for Mennonite Central Committee in Kenya and Tanzania. “He told me that he was changing his faith because he saw Christians burning other Christians’ homes.”

The divisions, of course, did not emerge suddenly in the crisis. Abraham Rugo Muriu, who leads International Budget Partnership Kenya’s office, says they can be traced back to Kenya’s colonial history, and the way people were separated and organized against each other to benefit British rule. The effects linger on.

“We don’t trust people who don’t speak our language, do not live in our areas, to speak for us,” he said. “Ethnicity has been quite divisive, because then it means that even when you have people who have fairly good standing, the fact that they don't belong to that ethnic group, or there seem to be ‘others,’ becomes a problem.”

“It remains more likely that a presidential candidate from any of the big five communities, Kikuyu, Luhya, Kalenjin, Luo and Kamba, will be elected president just because of their ethnic identity rather than any other factor,” he said.

Going into the 2022 election, many church leaders were still concerned about these internal divisions. They have an impact on national politics and limit Christians’ potential influence over the nation.

“The church in Kenya is split along ethnic lines,” Rugo Muriu said. “Faith and church seem to be sacrificed on the altar of ethnicity.”

As the candidates started campaigning in earnest, though, the pressing question for most churches was whether they would invite the presidential contenders to speak from the pulpit. A number of denominations—reflecting concerns about the past relationship between church and state—felt that having politicians speak in a service was a problem.

Anglicans, Presbyterians, Roman Catholics, and some evangelicals banned candidates from their pulpits.

“Christians from traditional denominations espouse more the popular theology of politics as a ‘dirty game,’” said Kiuna, with the Hesabika Trust, “and thus maintain a certain aloofness in matters of public and political engagement.”

One notable exception was the Methodist Church in Kenya, which decided that congregations could, if they wanted, invite presidential candidates to speak.

“The church is for all people,” said Joseph Ntombura, presiding bishop of the Methodist Church in Kenya. “Human beings are political, so there is nothing wrong with inviting the politicians in church.”

Many of the Kenya’s Pentecostal and charismatic churches also welcomed presidential contenders. Odinga visited a convention for the Akorino church, one of the largest of what are called the African Instituted Churches. He sat next to the church president and made a donation.

“Odinga and his running mate have made some damning statements that have rubbed evangelical Christians the wrong way—such as stating that small churches should be closed, that Christianity’s dominance in Kenya is a colonial legacy that needs to be brought down—and made promises to the Muslims to rectify this,” said Rachel Kitonyo, a Christian lawyer.

Ruto did better at reaching out to churches, she said. He repeatedly expressed his support for Christians and donated money to congregations and said his faith shaped his beliefs on homosexuality. He quoted Bible verses and talked about working together with Christian leaders, which resonated especially with Pentecostal Christians.

The candidates’ efforts to court Christians raised questions, for some Christian leaders, about the ideal relationship between pastors and politicians. Should churches be accepting money from political campaigns? For some, the donations raised the specter of corruption.

More than two-thirds of Kenyans (68 percent) think at least some religious leaders are corrupt. Kenya ranks 128th out of 180 nations in Transparency International’s Corruption Perception Index.

“It is not a secret that the matrix of money, power, ethnicity, and religion can create more hostility and relegate the values the nation has always aspired for,” said Ogalo.

Ruto “has projected himself as a genuine believer only interested in advancing the kingdom of God,” said Lucas Owako, an Anglican priest in Nairobi. “While some have argued that the millions given every week in such fundraisers are obviously proceeds of corruption and should therefore not be accepted in church.”

Owako finds it worrying that in his eyes the Kenyan church often only seems to speak with a collective political voice when it comes to abortion, LGBTQ issues, or religious freedom.

“Christians tend to feel that these issues directly concern them as compared to, say, issues of declining economy, national debt, corruption, or dysfunctional health systems,” he said. “That is why we all stood up to be counted during the campaigns for the 2010 constitution, which we opposed, but are muted, ambivalent or disjointed in confronting the latter issues, which are also real in the country.”

One common point of consensus on Christian witness going into the 2022 election was that Christians could be—and should be—a voice for peace. Many viewed violence as a top concern and saw a role for Christian leaders. Churches came together and organized with the aim of preventing the riots that happened in 2008 and the violence that marred the 2013 and 2017 elections as well.

In an attempt to be proactive, several Christian groups organized a church and politics summit in 2021 and later released a Bible study guide based on the event.

The Association of Evangelicals in Africa’s (AEA) Msafara wa Upendo—a Kiswahili phrase that translates to Caravan of Love—pulled together groups in Garissa, Lamu, Isiolo, and Nairobi counties, all of which have seen conflict in past elections. Pastors and imams were asked to preach about peace inside and outside their houses of worship.

Some ministers affiliated with the AEA also served as election observers accredited by Kenya ’s Independent Electoral and Boundaries Commission and worked in five different counties.

“Be patriotic enough to accept the outcome,” said the AEA’s general secretary, Master Matlhaope, in a statement released on Election Day. “A peaceful election largely depends on the loser’s maturity and the winner’s magnanimity.”

Ruto declared himself the victory shortly after the August 9 election, with about 50.5 percent of the vote. As the challenge from Odinga made its way through the courts, the EAK called for peace and asked its members to pray for guidance for the judges. The organization also posted a hotline on their social media pages asking people to report any incidents.

These efforts came on the heels of another EAK program which had paired Christian leaders with presidential candidates, asking the former to pray for, encourage, and visit with these leaders.

“To a great success, these are the leaders that eventually became a bridge for/in mediation and peace building initiatives in the post-election season,” said Makanda.

To some observers, this seemed like an important step in Christians’ view of their political responsibilities in Kenya.

“Christian leaders’ understanding of the nexus between faith and politics is expanding, so many of them are taking their roles seriously as mediators, reconcilers, healers, advisers, and peacemakers,” said MCC’s Kiptoo. “There are many Christian leaders that organized prayer sessions for the country and for candidate and these help the congregants to take their roles seriously.”

There was little violence in the month of simmering tension as the challenge to the election results went to the Supreme Court. Christians, like their new president, are thanking God for that, as they continue to figure out their role in public life going forward.

The Kenyan Presidential Election Is Over. The Conversation About Christians and Politics Has Just Begun.

The Kenyan Presidential Election Is Over. The ...