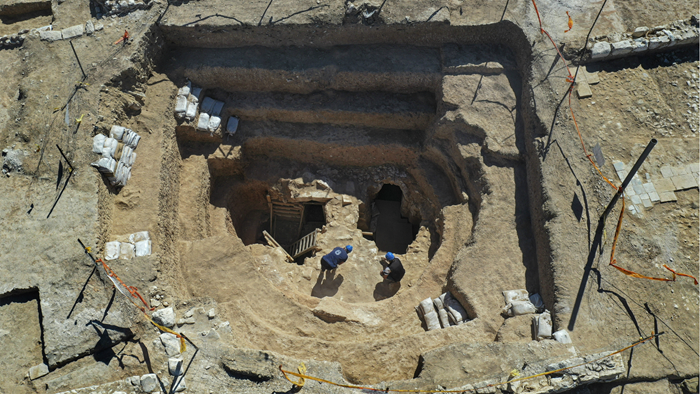 Biblical archaeology is back in full swing in Israel—after a two-year pandemic delay—and now the digs across the country are going to get a new boost from tourist-volunteers.

Israel’s Tourism Ministry has launched a new initiative aimed at getting Christian tourists involved in excavations. And a group affiliated with the American Society of Overseas Research (ASOR), the largest organization for professional American archaeologists working in Israel, is starting a 13-day tour with visits to 27 sites.

American archaeologists working in Israel welcome the new programs. Encouraging “archaeotourism” is good for archaeology—boosting the local economy, cultivating interested in the ongoing academic work, and supplying archaeologists with a steady flow of volunteers.

“We couldn’t get anything accomplished without them,” said Steve Ortiz, director of the Lanier Center for Archaeology at Lipscomb University in Nashville, Tennessee. Ortiz co-led a 10-year excavation at Tel Gezer, and is now a codirector of the Tel Burna Archaeological Project.

Getting tourists involved in archaeology isn’t a new idea. Israeli archaeologist Yigael Yadin sought out and recruited volunteers for the excavation of the famous site of Masada in the 1960s. Ever since, a stream of people have paid their own way to the Holy Land to dig, haul, and sift dirt, spending part of a vacation contributing to the grunt work of scholarship and the chance to touch a little bit of biblical history.

Every year, until travel was halted for COVID-19, hundreds of tourists visited archaeological sites in Israel. Archaeotourism is also promoted in neighboring Jordan and Turkey.

Cynthia Shafer-Elliott, a religion professor at Baylor University in Waco, Texas, first went to Israel as part of a college class. The class connected students to a program called Dig for a Day, which promises “authentic archaeology adventures.” For Shafer-Elliott, it sparked a passion that became a career.

Now she leads Israel tours in the summer that go to archaeological sites such as Abel Beth Maacah in northern Israel. Some in her groups are students getting class credit for digging. Others are people passionate about archaeology. Some are just curious about the physical remnants of biblical history.

“Most digs, I think, are happy to have volunteers from any kind of background,” Shafer-Elliot said.

John DeLancey, of Pittsburgh-based Biblical Israel Ministries and Tours, has been leading Israel tours with an archaeological component for years. (Disclosure: The author has co-led three archaeology-focused tours with DeLancey.) Recently, DeLancey took three volunteers to Tel Dan, in northern Israel, where they spent a week helping with the excavation.

DeLancey brings years of experience, but the volunteers were newer to the process of careful digging. All were welcome on the site.

“We enjoyed having them as part of the dig,” said Jonathan Greer, visiting professor of archaeology at Grand Valley State University in Michigan and codirector of the excavation. “They worked hard.”

Some of DeLancey’s tours also give people hands-on experience at the Temple Mount Sifting Project in Jerusalem. The project has relied on tens of thousands of volunteers since it began in 2004, including schoolchildren, who sift through dirt removed from the Temple Mount. Most work for an hour or two—enough time to get a feel for it and sometimes make important discoveries.

“People come in, they have a short training session, [and] they have supervisors watching them, so they're able to participate and contribute to the project," said Ortiz, at Lipscomb.

Not all of Ortiz’s experiences with volunteers at excavations have been positive, however. Sometimes, people don’t take the experience seriously.

“That doesn’t help archaeological research,” he said. “Normally, we put them in areas where they’re not going to do damage. But we’re still for it, because people have a great time.”

There are also occasional conflicts between volunteers and archaeologists. Some of the Christians who show up to help have a narrow view of archaeology and are only interested in a dig if they think it confirms a particular view of the Bible.

Greer, at Grand Valley State, says he has had to push Christians to embrace a broader view of what we learn from archaeology. It’s too simple to say excavations always just confirm Scripture.

There can also be political issues, as tourists find themselves interacting with Israelis and Palestinians who have different views of the disputes that have roiled the region for generations. For Christians, though, the experience of interacting with the people who live around biblical archaeology can be very rewarding, Greer said. The ASOR initiative, he noted, included a wide variety of viewpoints among its participants, and included visits to Jewish, Christian, and Muslim sites.

Despite the occasional conflicts, most archaeologists are happy to have more volunteers. Over the years, they’ve even come to admire these tourists who give part of their vacation to an excavation.

“A lot of these tourists are lifetime learners,” said Shafer-Elliott. “They want to learn how this all interacts with the Bible, with history, with archaeology. I think it's an untapped market, and I think it's a great idea.”