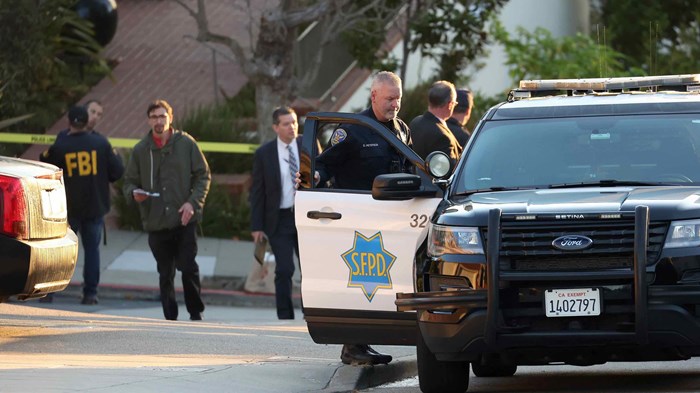 Image: Justin Sullivan/Getty Images
San Francisco police officers and F.B.I. agents gather in front of the home of U.S. Speaker of the House Nancy Pelosi after an attack on her husband Paul Pelosi.

This past summer, two weeks after a man allegedly attempted an assassination of US Supreme Court justice Brett Kavanaugh over abortion and gun control, the Presbyterian Church in America (PCA) at its general assembly debated a statement condemning political violence.

The statement noted, in part, a “a growing number of personal threats to public officials” and condemned “the destruction of property and the infliction of bodily violence against political opponents.”

Elders on the debate floor objected to the resolution. One elder speaking against the statement said that without political violence, the Protestant Reformation and American Revolution wouldn’t have happened. “We’d all still be genuflecting and using holy water,” he said.

A pastor in Florida went to the microphone and noted his Cuban roots, saying that sometimes it’s right to “pick up the sword.”

“This statement would condemn the very existence of this country,” said Aldo Leon. “It’s important to be very, very clear about this in the kind of country we live right now, with a … growing tendency for an overextended federal power.”

The denomination voted down the statement, with 75 percent opposing it.

American Christians don’t have clear thinking about when political violence is justified, according to historians, theologians, and pastors who have studied the subject and followed these debates. That matters as a hotly contested midterm election approaches and political opponents become targets.

On Monday, the US Justice Department charged a man with assaulting House speaker Nancy Pelosi’s husband Paul Pelosi and attempting to “detain and injure” Nancy Pelosi. In addition, David Wayne DePape faces state charges for attempted murder of the 82-year-old Paul Pelosi, whom he allegedly attacked with a hammer in front of police in the early morning hours of October 28.

DePape arrived at the Pelosi residence with zip ties, rope, tape, and a hammer, intent on holding the House speaker hostage, according to charging documents. He told police he wanted “the truth” and would break Nancy Pelosi’s kneecaps if she lied to him.

Per the charging documents, DePape told police that “much like the American Founding Fathers with the British, he was fighting against tyranny without the option of surrender.”

The attack was the latest in a string of political disputes turned into physical threats, from last year’s Jan. 6 siege on the US Capitol to the vandalism and violence against Christian pregnancy centers after Roe v. Wade was overturned this summer.

For evangelicals, the political stakes are high: A majority of evangelicals said in a 2019 Lifeway research survey that if those they disagree with implement their policies, “our democracy will be in danger.”

But theologians say Christians aren’t clear on when political protest can turn to physical resistance. Christians generally see Romans 13:1 as directing them to submit to the government, but they have also engaged in civil disobedience. That was evident most recently in churches refusing to obey government orders related to the COVID-19 pandemic. Many American Protestants reject violence as a political response, but some are confused about the ethical line between refusing to obey and violently resisting.

Looking back at Protestant doctrines of political resistance

Walzer, an 87-year-old political philosopher whose first book was about the Protestant doctrine of resistance, said that doctrine “in its most developed form” was “never an argument about popular resistance”—that is, individuals rising up and committing violence.

The Protestant Reformation “was the work of princes in Germany,” he said, and Martin Luther condemned the German peasant uprising. In the American Revolution, the colonies created a congress—a “lesser magistrate” to resist that fit in John Calvin’s framework of violent resistance, rather than individuals taking violent action, which Calvin condemned.

“Militant Protestants were prepared to fight but looking to authority to endorse the fight,” Walzer said. A few outliers like Scottish Presbyterian John Knox supported individual violent uprisings. But other traditions like the Mennonites opposed violence entirely.

In the 1980s, Presbyterian theologian and pastor David Coffin debated when Christians could use political violence with a Lutheran pastor, Michael Bray, who later bombed multiple abortion clinics. Bray based his justification for violence toward abortion providers on verses from Proverbs to “rescue the perishing,” according to Coffin. Bray was convicted in 1985.

Bray had no theory for what he was doing “beyond a thoughtless proof-texting, having that Proverbs text in his pocket,” Coffin told CT. “It’s not uncommon for evangelicals to not be too concerned whether there is historical pedigree to something they think is biblical.”

That approach stood in contrast with the civil rights movement’s thoughtfulness about political resistance, he said.

“[Martin Luther King, Jr.] had a theory of what he was doing and why and how it could be justified,” Coffin said.

Coffin, who before his theologian days worked as an elevator operator in Congress, supported the PCA statement against political violence. As a theologian, he found the PCA debate about political violence the most embarrassing debate he has sat through because Presbyterians have such a rich intellectual tradition of political resistance.

“That is one of the great contributions of Reformed theology to the modern age: a doctrine of revolution that makes possible the correction of tyranny without falling into anarchism,” he said. “I had an elder say, ‘If the government comes after me and my house, I have a .38 ready.’ Well, no. If a policeman comes to your house and has a warrant for your arrest, even if you know you’re innocent, you don’t have a right to shoot him! The idea that you might is what our Founding Fathers absolutely feared—it was the kind of anarchism that marred the French Revolution.”

Other parts of Protestantism have been discussing political violence too. A group of 65 Pentecostal and charismatic leaders issued a statement last month rejecting a Christianity that “hints at the use of force to advance God’s kingdom.”

The leader of a charismatic ministry, Jennifer LeClaire of Awakening Prayer Hubs, posted at the beginning of October that she had “several prophetic words on political violence in recent months.” Among other prayers, she prayed for repentance of “any rebellion, political violence, and anarchy.”

Many conservative Christians condemned last week’s hammer attack on Pelosi, including the president of the Southern Baptist Convention, Bart Barber.

“I'm praying tonight for Paul Pelosi, and I invite Southern Baptists to join me in doing so,” he tweeted. “What happened to him is reprehensible.”

But some made jokes about the incident, and repeated conspiracy theories. A leader in the Conservative Baptist Network and former member of the Southern Baptist Convention executive committee, Rod Martin, tweeted a picture of underwear and a hammer and wrote, “Get it now, the Paul Pelosi Halloween costume!”

Arizona Republican gubernatorial candidate Kari Lake, whom some evangelical leaders had recently anointed with oil, also mocked Pelosi. At a campaign stop she was talking about protecting children in schools and then joked that “apparently [Nancy Pelosi’s] house doesn’t have a lot of protection,” drawing big laughs from the crowd.

“It’s horrifying,” said Coffin, the Presbyterian pastor and theologian. “Creaturely empathy … that used to be seen as profoundly virtuous.”

He said empathy doesn’t mean people don’t have vigorous political fights, especially over rights and freedoms, but he compared an outbreak of violence to when someone is injured in a sports game. Whatever team they are on, you don’t want it to happen and you should help them off the field: “To not have that is a profound sense of your own inhumanity.”

Pelosi’s alleged attacker described his intentions as a fight against “tyranny,” a word that has come up in politics a lot recently.

People have regularly used the word in regard to Nancy Pelosi. One Presbyterian elder in the debate this summer said sometimes people need to “fight against tyrants.” Pastor John MacArthur used it to describe pandemic restrictions on his church meeting in California.

Tyranny in the American Revolution had a specific target, according to Samford University historian Jonathan Den Hartog: the king of England. Elsewhere in American history, abolitionists spoke of the tyranny of slaveholders, and American pastors used it in spiritual ways, to talk about the tyranny of sin. But tyranny should not be a “vague catchall for political disgruntlement,” Den Hartog said in an email.

In the PCA debate about political violence this summer, one pastor went to a microphone on the debate floor and said he had served in the military and as a police officer.

“I’m not a pacifist,” he said. But he supported the statement condemning political violence because he wanted the denomination to remember “that our highest allegiance is to Jesus Christ.”