Ministry-funded assessment shows the board didn’t ask questions but came up with creative ways to redirect donor funds.
Daniel Silliman|February 23, 2022 10:45 AM 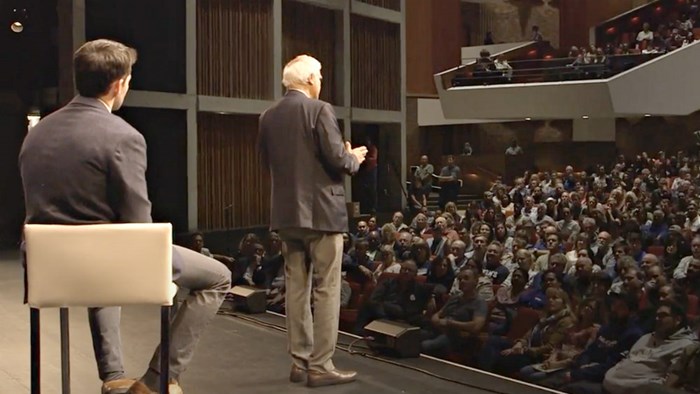 Ravi Zacharias International Ministries (RZIM) spent nearly $1 million to defend its founder and namesake against allegations of sexual misconduct in 2017 and then lied about it, according to an RZIM-funded assessment obtained by CT.

RZIM approved an external review last year to examine the ministry culture and practices that enabled apologist Ravi Zacharias to sexually abuse multiple women and almost completely cover it up. Investigators found that the board used deceptive financial maneuvers to fund the RZIM founder’s federal lawsuit against a woman he sexually abused.

Bills were sent to a board member, records were kept in a confidential financial file, settlement money was given to Zacharias as a personal loan, and the personal loan was paid off with a bonus. When the lawsuit came to light in 2017, the ministry officially misstated the fact that “no ministry funds were used.”

The executive committee of the board and some members of the RZIM leadership team knew the statement was false, according to the 78-page assessment completed by Guidepost Solutions. None of them corrected the record.

“There are no immediate consequences,” an RZIM accountant said in an email to the chief financial officer in 2017, which was forwarded to the CEO the same day. “I just pray the ministry is never challenged or brought to account.”

Five months and more than 55 interviews

RZIM hired Guidepost Solutions, a corporate consulting firm that specializes in reviewing how organizations handle sexual misconduct, in February 2021. The review followed a four-month investigation by another firm, which uncovered a pattern of abuse by Zacharias and a lack of accountability by RZIM.

Guidepost set up a system for additional victims to come forward but was told to focus on assessing the “structures, culture, policies, processes, finances, and practices” of the world’s largest Christian apologetics ministry.

The assessment included interviewing more than 55 people about RZIM’s response and reviewing “a voluminous number of documents and video” over the course of five months. A near-final draft of the report with 22 recommendations was sent to the board and CEO in July 2021.

The report concludes that RZIM’s reputation was severely damaged not only by Zacharias’s moral failures but also by catastrophic lapses of ministry oversight and leadership.

According to Guidepost, it is unclear “how and even if” RZIM can continue with its crippled credibility, but if it does continue, the ministry needs “new, diverse, independent” board members who do “not have any deep personal relationships with Zacharias or his family members.”

The document was sent to CT anonymously one year after CEO Sarah Davis said RZIM leadership “painfully and increasingly recognize organizational failures that have occurred and the repentance that needs to take place in both heart and action.”

Davis, who is also Zacharias’s eldest daughter, has since left RZIM. She was replaced by Garth Morrison, a business adviser who specializes in “turnarounds” for troubled corporations.

Morrison confirmed the July report was a draft and provided CT with the final version, dated August 3. The assessment was posted to RZIM’s website on Wednesday morning. The final version shows minor edits, but no substantial changes.

“Although we are releasing this report, we do not agree with everything in it,” the board said in a statement. “Regardless, we believe this report provides an important assessment of our organization’s actions to investigate Zacharias and the steps we sadly failed to take. The report highlighted that the work environment at RZIM was largely positive, and that organizational and financial processes were sound.”

Chose not to ask questions

Zacharias legitimately needed massages for his injured back, and RZIM leaders worried only about the possible perception of impropriety.

When a law firm hired by RZIM confirmed allegations of abuse reported by CT, many of the top leaders and board members seemed to believe that they were “duped,” Guidepost found. They saw themselves as innocent victims of Zacharias’s master manipulations—not unlike the women he sexually abused.

According to Guidepost, it “may be true” that they were duped, but the board and ministry leadership also actively chose not to ask questions when it was their job to do so.

“RZIM heavily and unjustifiably relied on Zacharias’s representations, many of which were discernibly dubious,” the report says. “Their veneration (bordering on devotion) for Zacharias and his family contributed to a culture that discouraged honest and open discussion about Zacharias’s conduct and valued loyalty to Zacharias above almost all else.”

The most egregious example may be the way the board responded to allegations that Zacharias had exchanged sexually explicit texts and solicited nude photos from a Canadian woman named Lori Anne Thompson.

According to Guidepost, the RZIM board was stubbornly incurious about the facts of the matter, while the executive committee found creative ways to fund an expensive legal defense.

Thompson and her husband’s lawyer sent Zacharias a letter on April 27, 2017, outlining the allegations and stating a demand—not unusual in the run-up to a lawsuit—for $5 million. Within a few days, the executive committee passed a resolution committing RZIM to “all payments made to legal counsel and related parties pertaining to the legal matter involving Ravi Zacharias.”

The executive committee did not investigate the abuse allegations at that time, according to Guidepost, but assumed Zacharias had not done any of the things the Thompsons said. When the full board was informed of the allegations, there is no record that anyone on the board asked for any further inquiry.

One member of the executive committee connected Zacharias with the law firm Nixon Peabody and arranged to have a donor make unrestricted gifts to RZIM that could be redirected to pay legal fees, according to Guidepost.

The payments, however, were not processed with other invoices. The law firm did not send bills to RZIM’s financial office. It sent them instead to one board member, who would personally contact the chief financial officer, who then instructed finance personnel to pay the bills without reading them, according to Guidepost.

The legal bills were placed in a confidential file where, the report says, they were “not subject to the usual recordkeeping and approval processes.” According to Guidepost, RZIM had no policies for deciding what ended up in the confidential file, creating a convenient loophole for hiding payments.

At any point during the Zacharias-Thompson lawsuit, board members could have asked to review the evidence that the lawyers gathered, preparing for Zacharias’s defense. Nixon Peabody in fact put together a binder of email exchanges between Zacharias and Thompson. The executive committee agreed, however, that only one of them would have designated access to the binder.

That person told Guidepost he did not look at the evidence until after the lawsuit was settled.

The following month, the report shows, the executive committee authorized a “general purposes loan from RZIM to Dr. Ravi Zacharias” for $260,000, covering the settlement and associated costs. RZIM had a policy against making personal loans but appears to have ignored it in several instances.

Zacharias worked successfully to keep the settlement a secret, omitting any mention of it in the official statement given to CT in December 2017. In an email the following day, Zacharias explained to his lawyers that “I don’t want to get into a magazine’s platform to fight this out.”

RZIM employees, donors, and supporters were left with the impression that there was no settlement and that each side had been left to pay its own legal bills. Zacharias’s official statement, reproduced by CT in its entirety in 2017, also specifically said no ministry money was used for the legal defense.

“This inaccuracy,” the Guidepost report says, “has been left to stand for years.”

The RZIM board’s official statement on Wednesday apologized for letting the misstatement stand, but noted that “the payments were legal and properly accounted for.”

In the spring of 2018, the executive committee found another creative way to help Zacharias. The committee gave Zacharias a $400,000 bonus—$260,000 to pay off the loan it gave him, plus $140,000 to cover taxes. According to Guidepost, the resolution approving the bonus said it was given with “the expectation that Ravi will use the funds to immediately pay off in full the entire amount of his financial indebtedness to the ministry.”

Combined with the funds given to the law firm, RZIM spent $960,000 of ministry money on Zacharias’s lawsuit against the Thompsons.

The Guidepost report appears to confirm the allegations of the lawyers suing RZIM in federal court on behalf of donors who believe their contributions were misused.

According to the class-action lawsuit, RZIM “deceived faithful Christians” and “bilked tens—if not hundreds—of millions of dollars from well-meaning donors” by taking money intended for apologetics and using it to enable and defend a sexual predator.

“If it’s true that RZIM used any money—let alone $1 million of donor funds—to participate in Ravi’s cover-up, then that is bombshell evidence in this case,” Drew Ashby, an attorney representing RZIM donors, told CT. “RZIM should immediately disclose it to the court.”

In a court hearing in Atlanta in September, RZIM’s lawyers told Judge Thomas W. Thrash Jr. that RZIM wasn’t involved in the lawsuit against Thompson. The ministry was “not a party to that litigation … not a party to that settlement.”

The Guidepost report, however, shows that while the ministry didn’t have its name on the lawsuit, the settlement, or the NDA, it was paying the bills—and using donor money.

Lisa Yearwood, a former RZIM supporter who estimates her family gave several million dollars to the ministry over the years, said knowing the board secretly directed donations to Zacharias’s legal defense just adds to the cycle of grief and anger she has felt since learning of the allegations against him in 2020.

“For us it isn’t about the money,” she told CT. “It’s the deception and the cover-up and that people we knew and trusted were part of covering up what he did. It’s been going on for years and it continues to this day.”