Many evangelicals celebrate their freedom of religion in the Muslim-majority nation. Orthodox and Catholics urge: Go slow.
Jayson Casper in Baku, Azerbaijan|April 1, 2022 12:45 PM 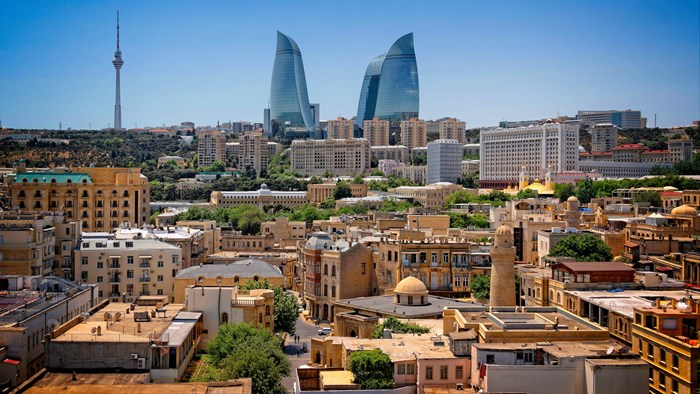 Emil Panahov has a vision.

“I want to see 96 percent of Azerbaijanis confess their faith in Christ, and revival often began when the king became a believer,” he said. “But our God is the president of presidents, so the government does not rule over me.”

He has a long way to go.

Panahov, founder of the Vineyard church in Muslim-majority Azerbaijan, arrives at his target by inverting his homeland’s estimated proportion of Christians: 4 percent. Most of these are Russian Orthodox, holdovers from when the Caucasus nation of 10 million was part of the Soviet Union.

But the Azerbaijan Bible Society estimates that 20,000 Azeris have become evangelicals, most within the past two decades. And the government—despite being panned for widespread human rights violations in politics—has earned local plaudits for its level of religious freedom, especially toward Christians and Jews.

Panahov’s own story supports his optimism. But is it wise? Orthodox, Catholic, and Presbyterian leaders offer a word of caution.

From an Azeri Muslim family with a communist father, in 1989 Panahov came to faith at the age of 12 through a local Russian Baptist church. But as he grew interested in the arts and dancing, the conservative Christian community could not accept such worldly activity.

Panahov fell away from the faith as he performed professionally around the world—until in 2007 he tore his meniscus. Doctors in Turkey, where he lived at the time, told him he would never dance again.

It was then he recalled Jesus—whom he said spoke a word of healing to him. But through his Turkish pastor, God also gave him a commission: Return to Azerbaijan, and share what God has done for you.

Panahov was reluctant, knowing his artistic passion was a spiritual offense. But trusting God, he went back and eventually found a new church home. Over the next seven years he worshiped comfortably, started a family, and even found work as a dance instructor. But then he heard again the voice that healed him: Go out and start a house church.

He left his fellowship with tears but knew to obey. In the beginning he met mostly with believing relatives, but four years later their number grew to the 50 required by the authorities for registration. Similar miracles have marked many in the movement, which according to Panahov counts 350 believers in 16 cell groups, spread throughout his Caspian Sea country.

And God has used his artistic talent. His team has drawn hundreds to gospel-themed performances in downtown Baku, the nation’s capital. Media and filmmaking have put the message on the internet. The Vineyard church baptized 64 new Christians during the pandemic, he said, and 36 during Azerbaijan’s victorious war with neighboring Armenia.

“Two years ago, the churches did not believe opportunities for evangelism could reach such a level,” Panahov said. “But I know it is from God, because I don’t have the brains for it.”

It is also from the government, which following many years of suppression now works with church leaders to legalize their fellowships. While noting a positive trend, the US Commission on International Religious Freedom still recommends Azerbaijan for inclusion on the State Department’s Special Watch List for religious freedom violators.

Of concern is the legislation that requires 50 people before legal registration.

Many evangelicals celebrate the freedom they do have—and the movement of the Holy Spirit to far surpass this number. But some notice emerging internal issues, and have set their minds on deficient ecclesiology believed to be widespread.

“We place great emphasis in the biblical theology of the church,” said Parvis Mahmudov, pastor of the Presbyterian church that meets in Baku’s historic Lutheran Church of the Savior. “Compared to other denominations, perhaps we have a higher standard of academic learning.”

Mahmudov, also from a Muslim background, noted that up to three-quarters of evangelical churches are dominated by a single charismatic leader. With a lack of accountability, over the years he has seen several fall into moral sin or financial corruption.

Others, especially in home fellowships, tend toward legalism and a controlling spirit. And where there are strong connections to international sponsors, some have been tempted to inflate their numbers.

Ordained by the International Presbyterian Church, with roots in Francis Schaeffer’s L’Abri fellowship in Switzerland, Mahmudov said his congregation has about 60 official members, with up to 80 attending regularly. In the last two years, 20 have come to faith. To join, new believers go through extensive preparation for baptism and membership via the Heidelberg Catechism.

Particularly challenging has been the development of biblical elders.

“We’ve had people join in a month, some in three months, and some that take up to a year,” he said. “We want to make sure it’s genuine, because they can face many difficulties.”

This is a fast track, however, compared to Azerbaijan’s traditional churches.

The Catholics, composed mainly of expat workers, require a year.

“People ask us, ‘Why so many obstacles? In Islam, all we have to do is recite the Shahadah (Muslim creed),’” said Vladimir Fekete, the Slovakian-born bishop of Azerbaijan. “If you are ready to wait, I tell them, it is a sign that your interest is real.”

Within a nationwide parish of 1,000 Catholics, about 100 Azeris have done so—one is now a priest, consecrated by Pope Francis in Rome. But many turn away, exposing their primary desire for financial help or emigration to Europe.

There is no controversy with the government, said Fekete, who keeps good relations. Pope Francis visited Baku in 2016, and Pope John Paul II in 2002. The stained-glass windows in St. Mary’s Church of the Immaculate Conception—crafted by Azeri artists—were financed by the Heydar Aliyev Foundation, managed by Azerbaijan’s first lady and vice president Mehriban Aliyeva. The church bells were donated during an official visit by the president of Poland.

Fekete also organizes a yearly prayer for Christian unity, in which all denominations participate. He is on good terms with the Russian Orthodox church and lends use of his sanctuary and soccer field to evangelical groups. (Panahov was a frequent applicant when needing a large facility.)

But while Catholic caution in conversion and ecumenical relations prevents undue controversies, issues can arise—usually with converts from the villages. Lauding the government’s respect for religious freedom, Fekete compared the situation to rural Italy, where few would welcome the adoption of another faith. Primarily foreigners, however, the Catholic clergy in Azerbaijan are not equipped to advise with family matters, he said.

But local evangelicals are also wary of a rural-urban divide.

Three Azerbaijani pastors requested anonymity to speak candidly about their ministries outside Baku. In the capital, they agreed, there have been great advances in religious freedom since 2010, when the government began registering convert churches.

But in the countryside, said one source, local authorities are more sensitive to variations from the religious norm, worried that outside actors will use faith to destabilize the nation. The primary concern is about Islamist extremism, but they closely monitor Christian activity as well.

The second source hewed closely to Fekete’s experience, agreeing that social pressures to remain Muslim are stronger and thus great care must be taken to explain the new faith identity with deference to traditional customs.

The third source expressed more confidence—but still withheld his name. He said there was no difference at all between city and village, due to a well-educated president who ensures that all religious minorities are treated with respect.

This is also the testimony of the Russian Orthodox, who are present in seven churches throughout Azerbaijan. The government looks to them as the head of all Christians in the country, said Alexy Nikonorov, priest-in-charge of the diocese since the death of its archbishop last June.

Responsible for the spiritual care of over 120,000 ethnic Russians, he said the post-Soviet fervor that led him and 20 others to the priesthood has dissipated over the years. Nonetheless, the church is active in providing sports club and camp opportunities for the youth, who volunteer to assist the elderly.

But only about 5 percent attend church regularly.

Still, half of these were formerly Azeri Muslims, who must first complete a one-year probationary period. Among their number are nine priests and deacons.

“Our purpose is not to make Azerbaijan a Christian country,” Nikonorov said. “Our task is to create a positive image of the church, to show the person who wants to be a Christian the faith that may speak to his heart.”

Even so, the Baku-born clergyman recognized a significant problem. Young Azeris do not speak Russian, and the church does not speak Azerbaijani. Nikonorov aims to change this dynamic, as given an aging population and repatriation to Russia he fears within 50 years the Russian Orthodox church may no longer exist in Azerbaijan.

Evangelicals can help them with evangelism, he said.

Nikonorov came to know the faith through childhood gospel cartoons from America. A local believer sparked his Scripture reading with the Gospel of Luke. And since his ordination, he has facilitated projects with visiting Protestants while partnering closely with the Bible Society.

Yet true fellowship should enrich in both directions.

“We look through 2,000 years of experience, unlike those who just came yesterday,” he said, stressing good relations with government and religious officials. “In the long term, we are usually more right than the others.”

Panahov does not disagree. In fact, he has been more successful than many at achieving positive government relations.

During the war with Armenia over the majority-Armenian enclave of Nagorno-Karabakh, Panahov secured government permission to distribute aid—including Bibles—to Azerbaijani soldiers on the frontlines. Later, in conjunction with local mayors, he extended this service to families who lost loved ones or whose homes were damaged by Armenian missiles.

It gives Azerbaijanis a different picture of Christianity, he said.

After the war, Panahov and his church organized an official concert to promote the National Day of Tolerance in downtown Baku. Currently he is negotiating with the government to establish a major in Christian religion at the Azerbaijan Institute of Theology. And he was one of 20 evangelical pastors who joined the Bible Society, the Russian Orthodox church, and others in a government-promoted open letter supporting Azerbaijan in its war against Christian-majority Armenia.

But Panahov said he does not kowtow to the authorities.

Once at the State Committee on Religious Associations, which grants registration to all religious entities, Panahov was asked why he gave up his Muslim faith. He told them the story of his knee and recalls that their jaws dropped. Half of the committee were KGB agents, he claimed, and more used to the long-bearded Orthodox.

“I didn’t change my religion, you did,” Panahov told them—not confrontationally, but with a smile. “Azerbaijan was Christian before Islam came in the seventh century. I’m returning to the faith of our fathers.”

He visits the committee frequently, developing friendships. They are all humans anyway, he said, and in need of salvation.

This boldness—or foolishness—has served him well so far. Going forward, it is part and parcel of his vision for Azerbaijan.

“I’m crazy,” Panahov said. “But whenever we get permission, we’re ready for stadiums.”