After yet another military overthrow of a democratically elected leader in West Africa, minority evangelicals debate the role of faith in politics.
Jayson Casper|October 13, 2021 06:00 AM 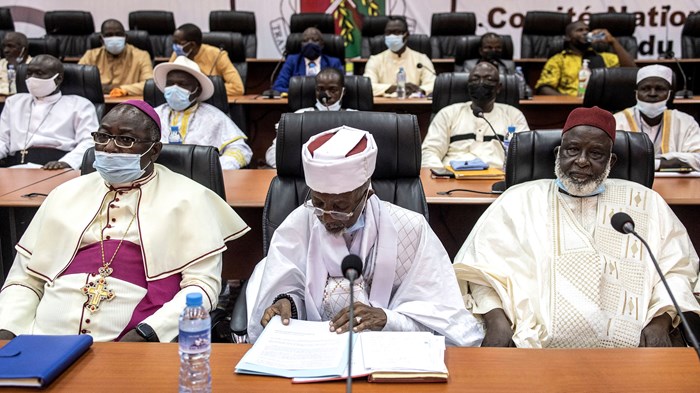 Image: John Wessels / Getty Images
Guinean religious leaders gather at the Peoples Palace in Conakry ahead of the first session of talks with Colonel Mamady Doumbouya on September 14, 2021.

In its 63 years of independence, Guinea has had three presidents. Last month, the West African nation suffered its third coup d’etat.

This time, says the local Christian minority, their Francophone country might just get it right.

“Alpha Conde cannot return,” said Etienne Leno, a Christian and Missionary Alliance (CMA) pastor. “We are praying that the new military authorities—who we find to be wise and intelligent—will be led by God.”

On September 5, Colonel Mamady Doumbouya, head of the Guinean special forces, ousted the 83-year-old president. Once an imprisoned opposition leader, Conde became the nation’s first democratically elected head of state in 2010 and won a second term in 2015.

Leno originally found much hope in Conde’s mandate, which was ushered in after the international community aided domestic forces to remove the military junta that violently seized power in 2008. Conde improved the business, tourism, and energy sectors, restoring Guinea’s global reputation.

Local infrastructure was neglected, however, and the Oregon-sized nation lagged in domestic development. One-third of the economy was linked to the mining of bauxite, the primary resource for aluminum. Guinea boasts the world’s largest reserves, but foreign companies dominate the extraction.

Despite 7 percent annual growth, nearly 50 percent of the 13 million population lived in poverty. And by late 2019, 36 percent of the country believed Guinea was moving in the wrong direction.

And then Conde made his power grab. He pushed through a March 2020 referendum for constitutional changes to reset his term limits and in October won reelection again. Both votes were challenged by violently suppressed protests.

Almost a year later, Doumbouya had had enough.

He promised no political witch hunt as he “made love to Guinea,” but it was nonetheless clear that opposition would not be tolerated. As the colonel—sworn in on October 1 as Guinea’s interim president—assembled a national dialogue, protests in support filled the streets and Christians noted the surprising calm.

Five days after the coup, the Association of Evangelical Churches and Missions of Guinea (AEMEG)—affiliated with the World Evangelical Alliance—issued a televised statement recognizing the new authorities. Catholic and Muslim groups made similar announcements.

“Relations are good in general,” Leno told CT. “Our message is for peace and national unity.”

One aspect of the takeover may have helped ensure it: Doumbouya shares the same Malinke ethnicity as Conde. Representing one-third of Guineans, the Malinke are second in population to the Fulbe people (41%), more widely known across West Africa as Fulani. Both groups are Muslim, as is the third-largest ethnic group, the Soussu (12%).

The Ministry of Religious Affairs counts Christians as 8 percent of the population, with the remaining 7 percent belonging to traditional religions. Christians are generally from the Kpelle and other smaller ethnic groups, though conversions have taken place among all tribes.

“We are grateful to God for our religious freedom, in this moment of crisis,” said Emmanuel Ouamouno, an Assemblies of God (AG) pastor and head of the evangelical radio ministry IBRA. ”We pray for our various religious leaders to serve together in advancing the principles of God’s kingdom.”

It will be essential. While only 52 percent of Guineans trust the military, 79 percent trust their spiritual guides.

“If the army takes on the needs of the population, it will be difficult to take power out of their hands,” he toldEvangelical Focus. “Everything will depend on how the army behaves.”

Early signs may be encouraging.

Though no timeline was given, Doumbouya promised neither he nor any transitional official will run for office. A national council of 81 people will be established, consisting of politicians, trade unions, businessmen, youth, and security members, with 30 percent female representation. Serving as the legislature, they will draft a new constitution and prepare for local, regional, and national elections.

And on October 7, Doumbouya fulfilled his pledge to appoint a civilian prime minister, choosing a respected diplomat and economic development expert.

Though the coup appears to be popular, support for democracy is strong, favored by 77 percent of Guineans. The same percentage rejects military rule. And 76 percent support term limits—the issue that upended Conde’s presidency.

“We should all participate in the restoration of democracy, in prayer and if necessary, in demonstrations,” said Tamba Kondiano, an AG pastor. “We are not officially taking a position, but we remain vigilant and are ready to accompany the new authorities.”

Guineans once welcomed Conde as a “sign of relief,” he said, and urged caution. The former president still commands 90 percent support among his ethnic group, he estimated. Among Christians, however, it has dropped to single digits.

Violence was severe in Nzerekore, a predominantly Christian city in the southeastern forested region, where Muslim supporters of Conde clashed with Christians and animists over the referendum. Mosques and churches were damaged in the melee, which killed 30 people and injured 70.

In the first round, the Fulbe candidate wins a plurality but falls short of the 51 percent necessary for victory. In the runoff, the Malinke and Soussu—whose ethnic groups share more similarities—team up to defeat the “outsiders,” whose 18th-century jihad conquered the area. Christians, who are concentrated in the cities, the southern coast, and the forested areas, tend to join the other minorities.

Before Conde, the second president was Soussu. The first president was Malinke. Many Fulbe believe it is now their tribe’s turn. Their leading politician, Cellou Diallo, was among the first to endorse the coup.

Doumbouya has not appealed to ethnic interests, instead framing the overthrow as the will of the people. Both Leno and Kondiano called on ECOWAS to support Guinea in the military-led return to democratic legitimacy.

But for much of Guinea’s history, Christians have stayed on the sidelines. The first president, Sekou Toure, expelled foreign missionaries in 1967, hindering the church from developing mature theological reflection.

“These realities ended up convincing us that a good Christian could not do politics,” said Leno. “But today, there is a new generation of evangelical youth.”

These believers tend to be less attached to ethnicity and are strongly pro-democracy. The National Front for the Defense of the Constitution, formed in response to Conde’s referendum, is headed by a Fulbe and assisted by an influential Baptist.

The former head of parliament was a Christian, though few have risen to the level of ministers, governors, and prefects. AEMEG, however, serves as an effective liaison between state and church, said Kondiano.

In addition to hosting a yearly “March for Jesus,” the evangelical association conducts a yearly prayer meeting in the legislature, to which it invites leading politicians. Most recently, Diallo was in attendance.

Some Christians believe this shift is a mistake.

“Young people should be very careful with politics,” said Ouamouno. “Once our brothers make friends with politicians, we lose them.”

Rather than serving the church through their positions of influence, he said, they become corrupt mouthpieces for their party. It can polarize a congregation, he said, which instead should be united around Jesus.

While divided in opinion about politics, Guinean sources agreed: Denominational division must be overcome. Kondiano has sought to complement the work of AEMEG by cofounding the “Christians of Guinea” Facebook page. He is currently seeking to expand cooperation with the nation’s Catholic churches.

The Holy Ghost Fathers first evangelized the area in 1877, and the CMA started work in 1919. Today, the evangelical denomination counts 437 churches and an additional 154 unofficial fellowships. Christians have influence beyond their share of population through a network of schools and hospitals.

Though the days of Toure’s persecution have long passed, Guinean Christians still view their religious freedom as incomplete. Sources told CT they want government funding for theological education, as is provided for Muslim imams. There should be more Christians in the administration—especially the deputy position in the Ministry for Religious Affairs. And they said discrimination exists against Christians in housing, making it difficult to rent in the larger cities.

Some Muslim converts to Christianity fear family reaction but are not harassed by the state. On both government restrictions and social hostilities involving religion, the Pew Research Center ranks Guinea moderately low—scoring between 2 and 3 on a 10-point scale.

Churches have been planted in all regions of Guinea, though most in attendance are Christians originally from the forested region. But the IBRA radio station operates freely in a Muslim region, and the constitution guarantees the right of individuals to choose and profess their religion.

“The evangelical church is like a wounded panther, regaining its strength,” said Ouamouno. “Our main challenge is to return to the unity of the body of Christ.”

And though the AG pastor distrusts politics, he longs for national leaders like David, Ezra, and Daniel. Until Christians can play that role—and some are already trying—these hopes must be directed to the junta.

“Pray for the new authorities in our transition,” Ouamouno said, “that the Eternal One will illumine their path, toward peace in Guinea.”