Ahead of the Holidays, Christian Charities Plan Around Supply Chain Holdups

Homeless ministries are preparing for higher costs and greater demand, while publishers and distributors relying on overseas shipping are also affected.
Ericka Andersen|November 15, 2021 06:00 AM 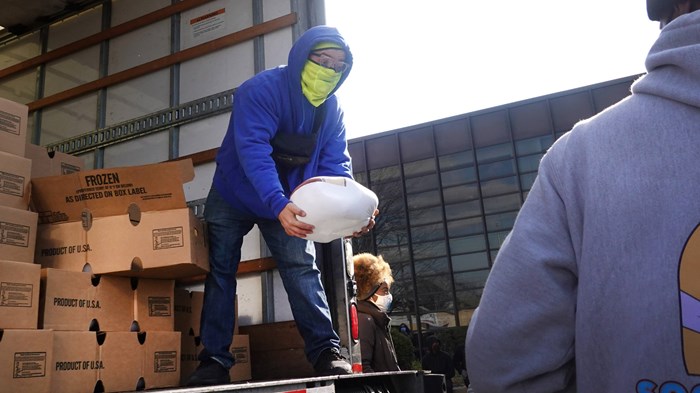 Wheeler Mission in Indianapolis usually produces tens of thousands of Thanksgiving meals for the hungry. Their motto: “Fill plates with food and lives with the hope of Christ.” This year, they may run out of the former before everyone is served.

Sam Brown, head chef at the Christian social services and homeless ministry, said he’s worried about having enough turkeys. From California to Chicago, there are nationwide reports of turkey shortages and massive price increases, both of which will affect nonprofit organizations feeding folks this season.

Shipping orders are blowing past delivery deadlines due to difficulty finding truck drivers. The ministry is short-staffed and is still trying to hire a dishwasher.

Hundreds of charities across the country are feeling the crunch of the global supply chain crisis, which is coming to national attention ahead of the holiday season. New research shows that nearly half of churches and faith organizations are involved in feeding the hungry, and this year they’re forced to shift processes based on longer wait times, product shortages, and unstable market expectations.

In some cases, ministries have been able to move forward with plans as normal. In other cases, depending on demand and access to resources, they’ve seen how the supply chain issues have gone on to impact those they’re trying to serve—from feeding the hungry in their own neighborhoods to sending Christian resources around the world.

The current struggles aren’t due to a lack of community generosity. Despite last year’s economic downturn, Americans actually donated more money in 2020 than they did in 2019. Though numbers for 2021 are not yet released, the Chronicle of Philanthropy predicts they will rise.

Demand for housing and food was up about 25 percent last year at Wheeler Mission, and they’re expecting the same levels this year, only with less access to the materials they need, said Perry Hines, chief development officer.

Wheeler is trying to anticipate needs for food, shelter, and other items well in advance, unsure which items may end up delayed in the supply chain. “Time will tell,” he said.

Feeding America and other charities have spoken about how the supply chain issues have also resulted in higher food prices for needy families and food banks themselves. Some plan to distribute chicken instead of turkey as a cost-saving measure this year.

Our Calling, a homeless ministry in Dallas that serves over 10,000 people a year, has already had to pivot to rely on donations to obtain supplies for the growing homeless population there. “We need simple things like outreach vehicles, food supplies, shoes, and hygiene items,” said Wayne Walker, CEO of Our Calling. “Unfortunately, many of these are on backorder.”

The Network of Community Ministries in Dallas started a local donation drive for hygiene items like deodorant, toothpaste, and soap. Prisons have also struggled to stock basic personal items regularly purchased by inmates.

Fortunately, some have not been impacted yet and expect to be able to plan ahead for a normal holiday season.

Convoy of Hope, which provides food, community outreach, and disaster response year-round, has its own fleet of trucks and has been able to navigate some of the material shortages across the US. The Springfield, Missouri-based charity does not anticipate needing to cancel or shrink any of its holiday programs thanks to a warehouse already stocked with food, water, and supplies.

“Our logistics team is spending a lot more time planning out our deliveries, and monitoring them through delivery, to make sure the relief supplies we're sending end up where they need to be,” said Ethan Forhetz, national spokesperson for Convoy of Hope. “Navigating this crisis hasn't been easy, but the Lord continues to make a way.”

Christians are also examining how the supply chain holdups could affect crucial holiday sales for publishers and booksellers. So far, the book industry has already been disrupted by a paper shortage, labor scarcity, and shipping delays.

“It’s everything from not being able to get books to press in time to issues with books and Bibles printed overseas being slowed by shipping issues,” said Bill Craig, senior vice president of publishing and ministry experiences at Lifeway Christian Resources.

Lifeway, which closed all of its brick-and-mortar locations in 2019, has had to be savvy in the past, but the twin struggles of a paper shortage and continued pandemic uncertainty are rough, especially as the holidays approach.

It’s not just new titles that aren’t making it. Getting book reprints and securing enough of Lifeway’s Sunday school curriculum has been particularly challenging, both due to the supply chain issues and to more than a year of church disruptions during the pandemic. Both of these parts of Lifeway have been “significantly impacted,” said Craig, who also noted a simultaneous uptick in digital sales.

One issue has been a lack of shipping containers to transport materials printed in China. Justin Paul Lawrence, senior director of sales and marketing at InterVarsity Press, said his company has dodged major issues thus far for new releases, partially because they do the vast majority of their printing domestically. Even so, they have had to change ordering and planning tactics to account for delays.

“We used to have to talk about printing delays every six months or so,” he said. “Now it's up to bi-weekly or weekly.”

Most industries are experiencing something similar—and some of them unknowingly contributed to the problem. When publishers and other companies started noticing the first shortages, they began stocking up on items, creating even more demand for an already over-strained, understaffed system.

The backups have also affected ministries that send shipments of Bibles and other materials abroad.

“Containers are about 30 to 50 percent more than what we were paying for them before,” said Jason Woolford with Mission Cry, which sent 1.2 million free Bibles via 24 shipping containers last year. “Normally I would have been able to order a container and have it here within the same week. As of right now, we’re out a month.”

Mission Network News reported that the ministry is trying to send four containers of Bibles and seminary books to Kenya, Ghana, and Pakistan before the end of 2021.

The strain has been less dire for those printing and shipping domestically. She Reads Truth, which releases yearly Advent Bible studies, prints its materials in Nashville, where it’s headquartered.

Cofounder Raechel Myers and her team have not run into delays or shortages with their 2021 Advent release, which is themed around Jesus as “The Everlasting Light.”

“With supply chain issues on our radar,” Myers told Christianity Today, “we’re just working really closely with our printer to ensure we have what we need in plenty of time.”

Many seasonal studies are also available digitally, as ebooks or downloadable PDFs.

Ahead of the Holidays, Christian Charities Plan Around Supply Chain Holdups

Ahead of the Holidays, Christian Charities Plan ...