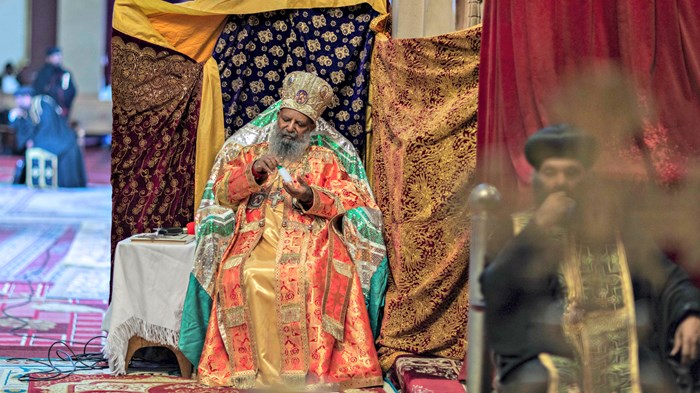 The head of the Ethiopian Orthodox Church in his first public comments on the war in his country’s Tigray region is sharply criticizing Ethiopia’s federal government, saying he believes its actions constitute genocide: “They want to destroy the people of Tigray.”

The United States ambassador hosted him today to learn more.

In a video shot last month on a mobile phone and carried out of Ethiopia, the elderly Patriarch Abune Mathias addresses the church’s scores of millions of followers and the international community, saying his previous attempts to speak out were blocked. He is ethnic Tigrayan.

The video comes as the conflict in Tigray marks six months. Thousands of people have been killed in the fighting between Ethiopian and allied forces and Tigray ones, the result of a political struggle that turned deadly in November. Dozens of witnesses have told the AP that civilians are targeted.

“I am not clear why they want to declare genocide on the people of Tigray,” Mathias says, speaking in Amharic and listing alleged atrocities including the destruction of churches, massacres, forced starvation, and looting.

“It is not the fault of the Tigray people. The whole world should know it.”

He calls for strength, adding that “this bad season might pass away.” And he urges the world to act.

The comments are a striking denunciation from someone so senior inside Ethiopia, where state media reflect the government’s narrative and both independent journalists and Tigrayans have been intimidated and harassed. The video also comes as Ethiopia, facing multiple crises of sometimes deadly ethnic tensions, faces a national election on June 5.

Dennis Wadley, who runs the US-based Bridges of Hope ministry and has been a friend of the church leader for several years, told the AP he shot the video in an impulsive moment while visiting him last month in Ethiopia’s capital, Addis Ababa.

“I just pulled out my iPhone and said if you want to get the word out, let’s do it,” Wadley said on Friday after arriving in the US. “He just poured out his heart. … It’s so sad. I actually hugged him; I never did that before.”

A church official reached on Friday confirmed the video and the interest of Mathias in making it public. The church patriarch serves alongside a recently returned exile, Abune Merkorios.

“I have said a lot of things, but no one allows the message to be shared. Rather, it is being stifled and censored,” Mathias says in the video.

“Many barbarisms have been conducted” these days all over Ethiopia, he says, but “what is happening in Tigray is of the highest brutality and cruelty.”

God will judge everything, he adds.

Ethiopia’s government says it is “deeply dismayed” by the deaths of civilians, blames the former Tigray leaders and claims normality is returning in the region of some 6 million people. It has denied widespread profiling and targeting of Tigrayans.

Currently in the United Kingdom pursuing PhD studies in New Testament, next year she will return to the Ethiopian Graduate School of Theology (EGST). Founded in 1997 by three prominent denominations, the seminary represents nearly all of Ethiopia’s evangelicals, approximately 20–25 percent of the national population of 112 million.

Without naming the offending parties, the Ethiopian Gospel Believers’ Churches Council (EGBCC) has made clear statements in favor of the peace process, she said, and against the “destructive forces intent on destroying Ethiopia.”

Earlier, the EGBCC organized two separate weeks of prayer and fasting for the Tigray region, mobilizing resources on its behalf.

But Abebe noted that the conflict started when the Tigrayan People’s Liberation Front (TPLF) first attacked the national army. While lamenting with the patriarch the sexual violence against women and other atrocities in Tigray, Abebe wonders why he has not spoken out against ethnic violence in other regions.

Perhaps he is a victim of a TPLF misinformation campaign?

“The patriarch’s statements were irresponsible,” Abebe told CT. “To throw around a term like genocide is a massive mistake that might embolden rebels across the country, when a critical election is just one month away.”

Witnesses have told the AP about seeing bodies strewn on the ground on communities, Tigrayans rounded up and expelled, and women raped by Ethiopian and allied forces including those from neighboring Eritrea. Others have described family members and colleagues including priests being swept up and detained, often without charge.

Churches have been the scenes of alleged massacres—one deacon in Axum has told the AP he believes some 800 people were killed in a November weekend at the church and around the city—and of mass graves.

“I struggle to find a word other than genocide to describe what is going on,” Meron Gebreananaye, a Tigrayan Baptist in the UK pursuing her PhD in religious studies, told CT.

“I am alarmed and ashamed that so many Ethiopians are willing to engage in denial and political explanations, for what is clearly an issue of basic humanity.”

Estimating about 5 percent of Tigrayans are evangelicals, she stated that the patriarch’s homeland is the heart of the Ethiopian Orthodox faith and the entry point of Christianity into all of Ethiopia.

Gebreananaye is also a writer with the Tghat initiative, chronicling the war in Tigray. She referenced confirmation by the United Nations Office of Human Rights of violations by the Ethiopian army that could amount to crimes against humanity. It has agreed to carry out a joint investigation with the Ethiopian Human Rights Commission.

She is also concerned about reports depicting orchestration of a deliberate famine. The AP has also reported that thousands of Tigrayans across Ethiopia have been detained on suspicion of treason, far beyond suspected military personnel.

“His Holiness has spoken out with great courage,” Gebreananaye said, “and at considerable personal danger to himself.”

Mathias, born in 1942, has been outspoken in the past. In 1980, he became the first leader of the church to denounce the rule of Ethiopia’s communist regime “and was forced to live abroad for more than thirty years,” according to the United Nations refugee agency.

Yoseph Mengistu, a former instructor at EGST, calls for deliberation.

“Sadly, at the moment, many are siding with either TPLF or the Ethiopian government without knowing the intricacies of the situation,” the senior teaching fellow at the School of Oriental and African Studies at the University of London told CT.

“I don’t believe the patriarch is lying or trying to misinform.”

But there is a war going on—and beyond conventional means. While rebel forces were routed quickly, they have rebounded with a war of propaganda. Too many Western media outlets and governments have been taken in, he said.

Not present in Ethiopia, Mengistu is hesitant to comment on the details. But as it is, the people suffer.

“The innocent and poverty-stricken peoples of Tigray are a bargaining chip,” Mengisto said, “and are caught up in the middle.”

So also are the churches.

“Religious leaders are influenced by their ethnic roots,” Ermias Mamo, deputy secretary-general of the Kale Heywet church, told CT. “We are divided more than any time before.”

The previous TPLF government is partly the cause, he said, as to stay in power it destroyed the national vision. President Abiy Ahmed—a fellow evangelical—is doing his best to unify the nation, encouraging change and democracy. But given the nature of the country, regional leadership defers to its ethnic majority.

As a result, churches, mosques, and evangelicals are all divided.

“We are in a mess, hoping for the Lord to intervene,” said Mamo.

“It is confusing and complicated. Please pray for us.”

Cara Anna reported for the AP from Nairobi, and writer Haleluya Hadero contributed. Jayson Casper reported for CT from Beirut.