But majority declines to revisit rules for religious accommodation, over protests from justices Samuel Alito and Neil Gorsuch.
Daniel Silliman |June 17, 2021 11:25 AM 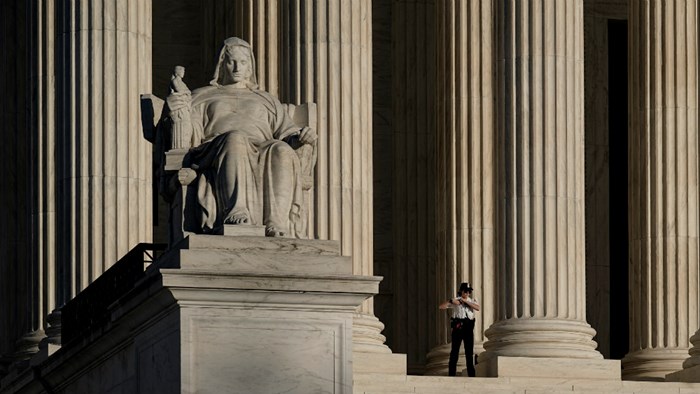 Update (June 17): The United States Supreme Court ruled decisively in favor of a Catholic foster care agency on Thursday, with all nine justices agreeing that the city of Philadelphia violated the First Amendment’s protection of religious liberty when it ended a contract with Catholic Social Services (CSS) over service to LGBT people.

“It is plain that the City’s actions have burdened CSS’s religious exercise by putting it to the choice of curtailing its mission or approving relationships inconsistent with its beliefs,” wrote Chief Justice John Roberts.

Philadelphia claimed the city could not contract foster care services with a Catholic agency that only served married heterosexual couples because of an antidiscrimination law ensuring that everyone, regardless of sexual orientation, has equal access to public accommodations. The court found, however, that foster parenting is not a “public accommodation,” since certification is not available to the public and “bears little resemblance to staying in a hotel, eating at a restaurant, or riding a bus.”

According to the court, there was also no evidence presented in the record that the Catholic agency’s policies ever prevented a same-sex couple from fostering a child, or that it would have that effect.

The other three justices—Samuel Alito, Neil Gorsuch, and Clarence Thomas—agreed with the judgement but signed on to two concurring opinions arguing the court should go further in defense of religious exercise. They wanted the court to overturn a 1990 precedent written by conservative legal icon Antonin Scalia, which made it easier for governments to justify laws that place a burden on religious activity.

In Employment Division vs. Smith, Scalia said that governments can burden religious practice as long as it is done “incidentally,” and religious activities are not being targeted by the “neutral” and “generally applicable” law.

In Thursday’s ruling, Roberts and the majority said Philadelphia was intentionally targeting the Catholic foster care agency. The law was not neutral toward religion and not generally applicable, since it was written with the Catholic agency in mind. The court decided not to overturn the 1990 precedent.

Gorsuch, in his concurring opinion, questioned the majorities’ decision to “dodge” the critical legal question of the standard for religious accommodation.

“Perhaps our colleagues believe today’s circuitous path will at least steer the court around the controversial subject matter and avoid ‘picking a side,’” he wrote. “But refusing to give CSS the benefit of what we know to be the correct interpretation of the Constitution is picking a side. Smith committed a constitutional error. Only we can fix it.”

Alito made a similar argument—at length. His opinion stretched to 77 pages, 62 more than the majority opinion, criticizing the court for not doing what it should do.

“I would overrule Smith,” Alito wrote. “After receiving more than 2,500 pages of briefing and after more than a half-year of post-argument cogitation, the Court has emitted a wisp of a decision that leaves religious liberty in a confused and vulnerable state. Those who count on this Court to stand up for the First Amendment have every right to be disappointed—as am I.”

Advocates for religious liberty and Catholic Social Services were celebrating the 9-0 decision when it came down, however.

Attorney David French called it “a big win for religious freedom” and celebrated the fact that “every justice concurred at least in the result.”

“Religious liberty should not be a partisan issue,” he said on Twitter.

“This ruling in Fulton means that children who need safe, permanent, and loving homes will be served by a foster-care system that welcomes all who are qualified to serve those in need,” she said.

Advocates for LGBT rights expressed disappointment in the ruling but appreciated the narrowness of the majority opinion.

“For years, the religious right has sought a First Amendment license to discriminate against LGBT folks,” wrote David Cole, the national legal director for the American Civil Liberties Union. “They didn't get it today in Fulton. We live to fight another day.”

Original report (Nov. 5, 2020): While the nation focused on counting votes on Wednesday, the United States Supreme Court heard arguments in a case that could dramatically expand protections for religious liberty.

Lawyers for Philadelphia argued that the city should be allowed to discriminate against religious social service providers as long as the rules it uses are “neutral laws of general applicability,” citing a 1990 decision penned by conservative legal giant Antonin Scalia. Lawyers for Catholic Social Services, on the other side, argued the court should reconsider Scalia’s previous ruling in Employment Div. v. Smith, because it established a standard that allows governments to target religious minorities and place significant burdens on what the First Amendment calls their “free exercise.”

“The Free Exercise clause is at the heart of our pluralistic society, and it protects petitioners’ vital work for the Philadelphia community,” attorney Lori Windham argued in Fulton v. City of Philadelphia.

“The city is reaching out and telling a private religious ministry—which has been doing this work for two centuries—how to run its internal affairs. And trying to coerce it to make statements that are contrary to its religious beliefs as a condition of continuing to participate in the religious exercise that they have carried out in Philadelphia for two centuries.”

In 2018, a city official read a newspaper story about conservative Christian opposition to same-sex foster parents. Philadelphia had long contracted foster care services to Catholic Social Services. There weren’t any complaints about the church-run organization discriminating against LGBT people, but the official was nonetheless concerned and brought the issue to the city council. The council changed its contracting policies and passed a resolution opposing “discrimination that occurs under the guise of religious freedom.” The entire process took three days.

Catholic Social Services asked for an exemption from the city, noting it would be happy to refer same-sex couples who wanted to foster to the more than two dozen other agencies that also contract with the city. LGBT people wouldn’t be prevented from fostering, and the Catholic agency shouldn’t be required to give up its religious convictions just because they are unpopular. The city refused, saying the new standards had to be equally applied to everyone.

“A universal clause in every contract bars sexual orientation discrimination,” said Neal Katyal, the attorney representing Philadelphia. “That clause contains no exceptions, and it applies equally to every [foster care agency], religious and secular alike.”

Katyal was appealing to the 1990 case, when the court established “general applicability” as the standard for deciding when a law violates religious liberty. In that case, two members of the Native American Church were denied Oregon’s state unemployment benefits because they were fired for using peyote. They objected that the hallucinogenic was a religious sacrament in the church and should thus be protected.

According to Scalia, this does “place at a relative disadvantage those religious practices that are not widely engaged in.” But that’s unavoidable. Religious minorities will receive less leeway for the exercise of their faith if it’s unpopular and they don’t have the political power to win legislative exemptions for themselves. The other option, he wrote, is “a system in which each conscience is a law unto itself”—pluralism leading to complete anarchy.

As American culture grows more accepting of LGBT people and the court has expanded protections of LGBT rights, religious conservatives have begun to worry that they will be the ones at a “relative disadvantage.” If traditional Christian teaching rejecting homosexual activity as sinful is widely unpopular, then cities and states are not likely to exempt religious organizations from “generally applicable” laws against LGBT discrimination. That could make life difficult for foster care services, Christian wedding cake bakers, evangelical colleges, and others, just as laws against drug use have made it hard for the Native American Church to practice its peyote sacrament.

The standard that Scalia set up has also been applied to Santeria priests who wanted exemption from local animal cruelty ordinances to sacrifice chickens, peace activists who don’t want to pay the portion of their taxes that funds the US military, and, quite recently, churches seeking exemptions from COVID-19 restrictions on public gatherings.

The court has, in recent years, protected religious liberty in multiple rulings, deciding in favor of religious business owners, religious employers, and religious schools. With the recent addition of three conservative justices—two of them Catholic—it does not seem like the court is poised to change course.

Several evangelical groups, including the National Association of Evangelicals, the Council for Christian Colleges and Universities, the Ethics and Religious Liberty Commission of the Southern Baptist Commission, and the Church of God in Christ, have asked the court to use this case to revisit the precedent set by Smith.

Court observers say, however, that the justices may not take the opportunity. They could, instead, say the city of Philadelphia did not meet the standard of a “generally applicable rule” because the council was specifically targeting the Catholic foster care agency. That would be similar to the court’s ruling in Masterpiece Cakeshop v. Colorado Civil Rights Commission in 2018, which focused narrowly on the commission’s process for evaluating the cake shop owner.

The justices might worry that overturning Smith would open up every city and state to unending lawsuits, as people attempt to win exemptions from every possible regulation. “The practical advantage of Smith,” a legal advocate for local governments argued, “is that it is simple. Smith is a bright line rule; no one is entitled to an exception from a valid, neutral, generally applicable law.”

The case is also one of the first heard by the newest justice, Amy Coney Barrett. Barrett clerked for Scalia and is seen as his legal disciple. It would be surprising if one of her first votes overturned one of his landmark opinions.

Justice Sonia Sotomayor, one of the more liberal judges, indicated interest in a limited ruling on religious liberty during the oral arguments.

“If one wanted to find a compromise in this case,” she asked one of the lawyers, “can you suggest one that wouldn’t do real damage to all the various lines of laws that have been implicated here?”