Fate of Dadivank monastery among the many questions amid delayed transfer of territory under Nagorno-Karabakh armistice deal.
Jim Heintz - The Associated Press|November 15, 2020 10:10 PM Image: Dmitry Lovetsky / AP
A man holds an icon from the Dadivank, an Armenian Apostolic Church monastery dating to the ninth century, as ethnic Armenians leave the separatist region of Nagorno-Karabakh on November 14.

MOSCOW (AP) — Azerbaijan on Sunday postponed taking control of a territory ceded by Armenian forces in a cease-fire agreement, but denounced civilians leaving the area for burning houses.

The cease-fire ended six weeks of intense fighting between Azerbaijan and Armenia over the Nagorno-Karabakh region and territories outside its formal borders that had been under the control of Armenian forces since 1994. The agreement calls for Azerbaijan to take control of the outlying territories. The first, Kelbajar, was to be turned over on Sunday.

But Azerbaijan agreed to delay the takeover until November 25 after a request from Armenia. Azerbaijani presidential aide Hikmet Hajiyev said worsening weather conditions made the withdrawal of Armenian forces and civilians difficult along the single road through mountainous territory that connects Kelbajar with Armenia.

After the cease-fire was announced on Tuesday, many distraught residents preparing to evacuate set their houses ablaze to make them unusable to Azerbaijanis who would move in. Smoke rises from a burning house as cars and trucks stuck in a huge traffic jam climbing along the road from Kelbajar leaving the separatist region of Nagorno-Karabakh to Armenia on Nov. 14.

Prior to a separatist war that ended in 1994, Kelbajar was populated almost exclusively by Azerbaijanis. But the territory then came under Armenian control and Armenians moved in. Azerbaijan deemed their presence illegal.

“The placement and settlement of the Armenian population in the occupied territory of the Kelbajar region was illegal … All illegal settlements there must be evicted,” Hajiyev said.

The imminent renewal of Azerbaijani control raised wide concerns about the fate of Armenian cultural and religious sites, particularly Dadivank, a noted Armenian Apostolic Church monastery that dates back to the ninth century.

“Christians of Azerbaijan will have access to these churches,” Aliyev’s office said in a statement Sunday. 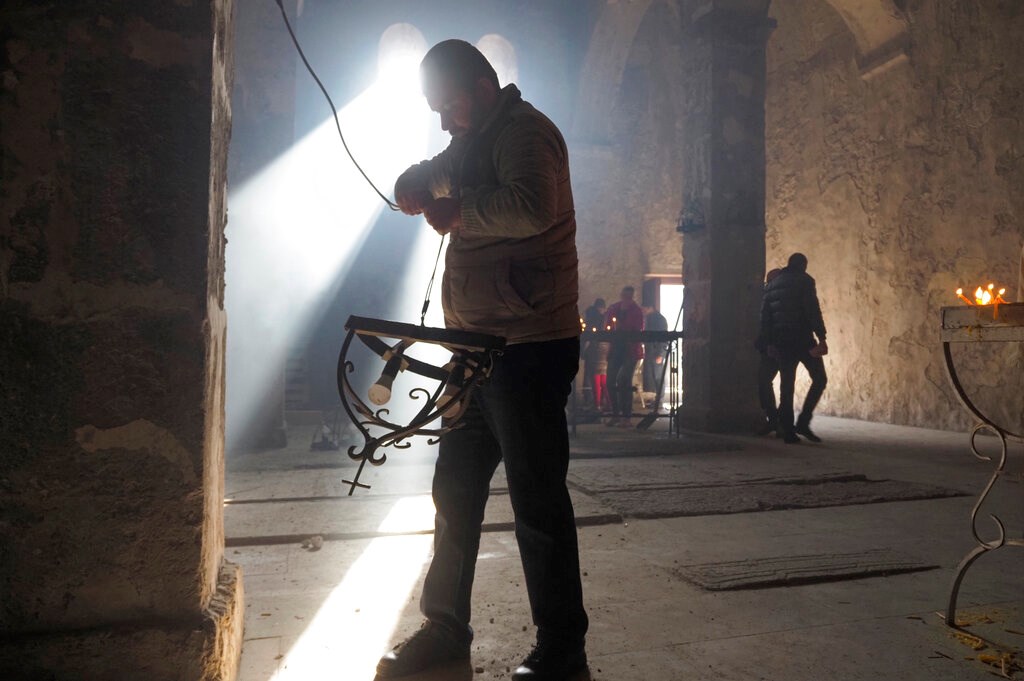 A man removes lamps inside a church of the Dadivank, an Armenian Apostolic Church monastery dating to the ninth century, as ethnic Armenians leave the separatist region of Nagorno-Karabakh to Armenia, Saturday, Nov. 14, 2020.

Azerbaijan is about 95 percent Muslim and Armenia is overwhelmingly Christian. Azerbaijan accuses Armenians of desecrating Muslim sites during their decades of control of Nagorno-Karabakh and surrounding territories, including housing livestock in mosques.

The Armenian Foreign Ministry on Sunday denounced vandalization of the Ghazanchetsots cathedral in the Azerbaijan-held city of Shusha (Shushi) as “outrageous.” The Armenian Apostolic Church earlier said vandals defaced walls of the church after Azerbaijani forces took the city.

Nagorno-Karabakh was an autonomous republic of Azerbaijan during the Soviet period. A movement to join with Armenia arose in the late Soviet years and after the Soviet Union collapsed, a war erupted in which an estimated 30,000 died and hundreds of thousands of people were displaced. 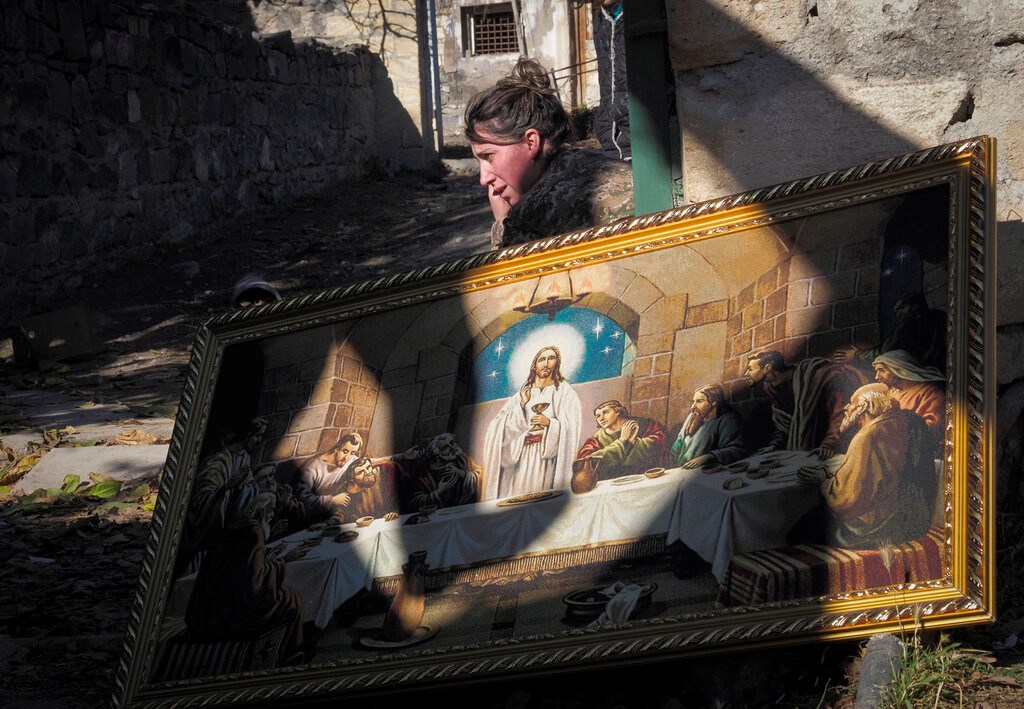 Sirarpi Safaryan sits near her house in Kalbajar before leaving the separatist region of Nagorno-Karabakh to Armenia, on Saturday, Nov. 14, 2020.

Sporadic clashes erupted after the war ended in 1994 and international mediators unsuccessfully sought for a resolution of the dispute. Full-scale fighting flared anew on September 27. Azerbaijan made significant advances and a week ago announced that it had seized the strategically critical city of Shusha. The cease-fire agreement came two days later.

The cease-fire agreement and cession of territories was a strong blow to Armenia and prompted protests against Prime Minister Nikol Pashinian. 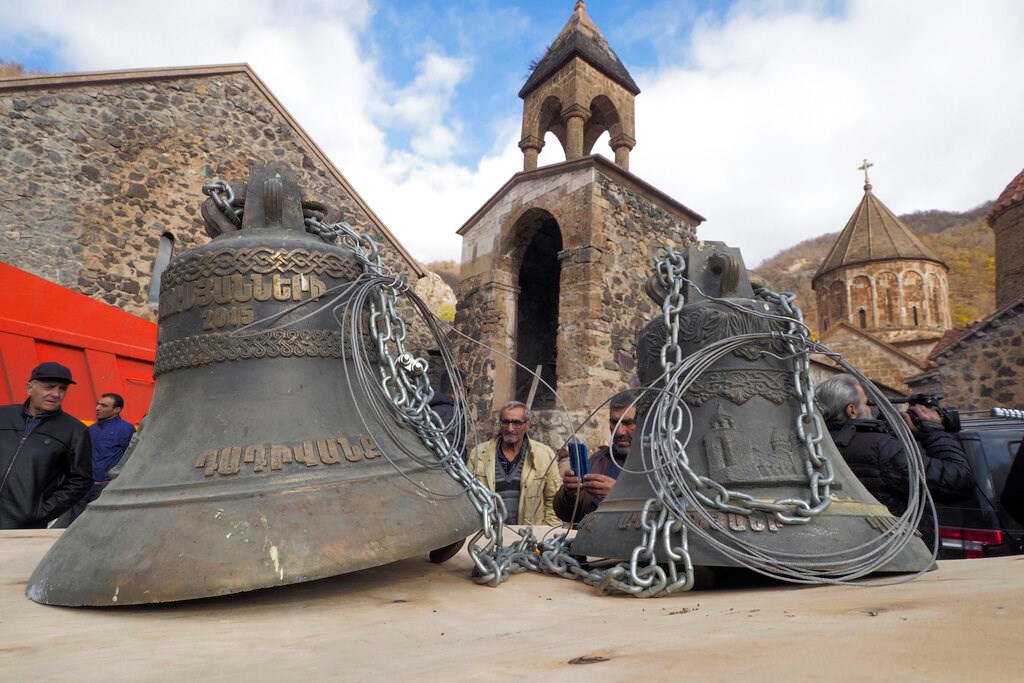 Bells removed from the Dadivank, an Armenian Apostolic Church monastery dating to the ninth century, as ethnic Armenians leave the separatist region of Nagorno-Karabakh to Armenia on Nov. 14.

On Saturday, Artur Vanetsyan, the leader of a small center-right party who formerly headed the national security service, was arrested on suspicion of plotting to assassinate Pashinian. He was released from custody Sunday and it was unclear if the charges against him would stand.

The agreement also dismayed many Armenians who had hoped for Russian support in the conflict. Russia and Armenia are part of a defense alliance and Russia has a large military base in Armenia.

“Our nation has lost everything, our heritage, everything. We have nothing left. I can’t say anything. I’m only begging Russian people to help us, so that at least others can have a better life in our own land,” said Seda Gabrilyan, a weeping mourner at the Sunday burial of a Nagorno-Karabakh soldier in Stepanakert, the regional capital.

Aida Sultanova in London, Avet Demourian in Yerevan, Armenia, and Kostya Manenkov in Stepanakert, contributed to this report.