Church of the Highlands’s expulsion in Birmingham has some pastors worried about growing scrutiny.
David Roach|June 26, 2020 09:38 AM 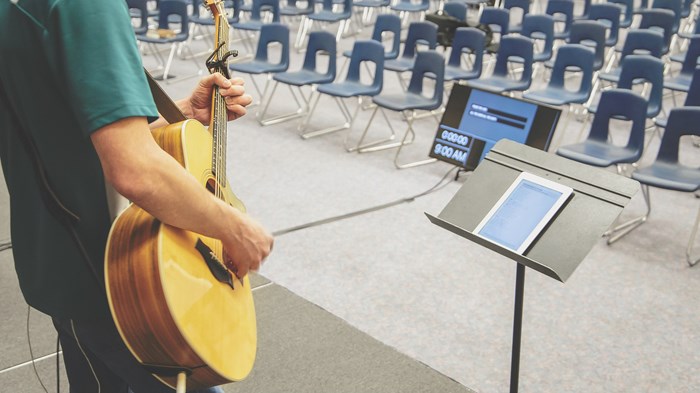 When Alabama megachurch pastor Chris Hodges liked recent social media posts from conservative commentator Charlie Kirk, he launched a chain of events that led to two of his church’s campuses being expelled from their meeting spaces in Birmingham public schools.

Hodges has met with African American leaders at Church of the Highlands and apologized for his engagement with “multiple insensitive social media posts.”

As pundits continue to debate whether the city’s expulsion represents viewpoint discrimination—former US Attorney General Jeff Sessions called it “an attack on both religious liberty and freedom of speech”—some Christian leaders wonder whether the case will draw more scrutiny toward the thousands of congregations who use leased space in public schools.

Hodges’ congregation, the Church of the Highlands, began meeting in 2001 in a local high school auditorium. It has since grown to become the biggest church in Alabama, with more than 20 campuses worshiping a mix of their own buildings and rented public spaces. Two of those sites had their leases with Birmingham public schools terminated June 9 following two weeks of controversy over Hodges’ social media activity, which was brought forward by a public school teacher.

The Church of the Highlands controversy represents the most high-profile dispute over churches meeting in public schools in recent years. But the religious bias against church plants has been around far longer, according to J. D. Payne, a church planting scholar at Samford University.

Religious freedom advocates argue that if public schools open their space to community organizations during off-hours, they cannot discriminate against churches—or other religious groups—just for being religious.

A years-long legal battle over New York City ban on worship in school buildings concluded in 2015, and cases continue to pop up around the country, often raising concern that using public space for religious services represents an endorsement of religion or a favor to religious groups since rental fees are often cheaper than for other buildings. A 2012 LifeWay survey found that two-thirds of adults approved of schools renting to churches and more than a quarter said rentals should be limited to non-religious groups.

“Some public places have pushed back on churches’ meeting in their facilities,” Payne said. It’s possible there will be “an uptick in bias and opposition to churches’ meeting in schools,” but it’s too early to tell whether there would be fallout for fellow church planters, many of whom are already out of their normal meeting spaces while schools are closed due to the coronavirus.

The Church of the Highlands has been a model for church planting and multisite church growth through the Association of Related Churches, a non-denominational network Hodges co-founded. The association trains pastors to start congregations in leased spaces like school auditoriums and movie theaters. Kairos Church Planting, a Churches of Christ church planting organization, estimated that half the congregations in its network met in public schools.

Church planters may need to be on heightened alert about making controversial statements, said Daniel Yang, director of the Send Institute, a think tank for evangelism and church planting sponsored by Wheaton College’s Billy Graham Center and the North American Mission Board.

“If you tweet something that’s a little bit too aggressive” as a church planter, he said, it also “potentially puts your funding at risk” from sponsoring organizations. At the same time, church planters tend to be “a little more amped up” about political and social issues than their counterparts in established churches, Yang said.

Church planters are already in a difficult logistical position during coronavirus shutdowns. Most have been kept out of school buildings while officials wait to reopen, and some lost their contracts while districts shifted plans.

Reach Fellowship in Long Beach, California, had been renting a public high school gym before COVID-19 struck. In response to the virus, the Long Beach Unified School District canceled the contracts of all community groups meeting in local schools.

Reach elder Tyler Smith said the church has not talked with school officials about returning and is attempting to secure space in a larger church’s facility. “Understandably and rightly,” Smith said, the school district’s “primary concern is safety of the students.”

The Oak Lawn location of Chicago’s New Life Community Church has a similar story. It was meeting in a public middle school before the pandemic and found itself displaced.

As coronavirus restrictions ease, the state of Illinois has limited churches to gatherings of 100 people. But school officials say the Oak Lawn campus is limited to gatherings of 50 people if it returns to its former location—because other groups meeting in the school also are limited to fifty. With an average attendance of 250, leaders decided it wasn’t worth regathering at the school yet and have moved to home groups.

“I don’t view it as a hostile thing,” location pastor Don Kaufman said of the school district’s policy. “We’re for sure going back to the school” if opportunity arises.

The possible pushback and the logistical concerns around coronavirus could stand to hinder a group of churches that have shown to be remarkably effective.

After four years, the average worship attendance for church plants that meet in schools is double the attendance of church plants meeting in all other locations, according to The State of Church Planting in the US, a 2015 report by LifeWay Research and NewChurches.com.

David Roach is a writer in Nashville.