And why advocates say US commitment to the cause cannot let up now.
Megan Fowler and Rebecca Randall|November 27, 2019 09:00 AM 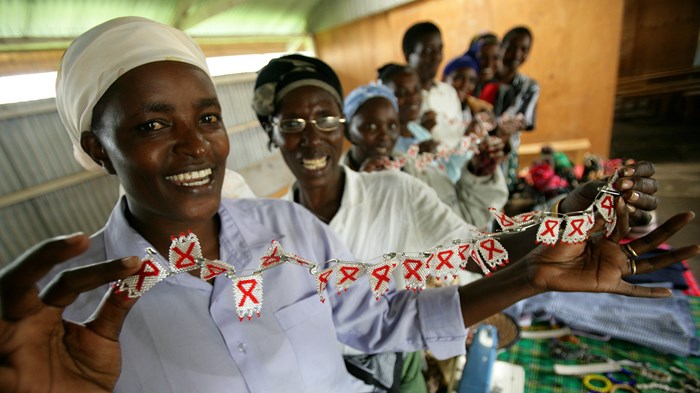 On the 32nd commemoration of World AIDS Day, Christian groups remember their role in leveraging political will to create a transformative global public-private partnership that has shaped the trajectory of AIDS pandemic.

Last month, global political leaders finalized commitments to the Global Fund to Fight AIDS, Tuberculosis, and Malaria, extending funding through 2023. The Global Fund, founded in 2002, received a boost the following year when President George W. Bush established the President’s Executive Plan for AIDS Relief (PEPFAR), a US initiative that evangelicals championed and played a critical role in drafting.

The 2019 documentary 27 Million Lives showcases how evangelical organizations and musicians like Michael W. Smith helped promote awareness for the cause, resulting in PEPFAR’s broad support from across the faith community and both parties. The film’s title references the estimated number of lives saved since 2004 because of the work of organizations receiving PEPFAR funds, beginning with a $15 billion commitment over five years.

PEPFAR and the Global Fund “are not any one president’s program, not any one party’s program,” said Michael Gerson, who served in the Bush White House, in the recent documentary. “They really are the American people coming together to do something amazing in the world.”

Several humanitarian groups who have been involved with the campaign—like World Vision, World Relief, and Food for the Hungry—have spoken up in recent years against proposed cuts to foreign aid under an “American First” budget and have defended the country’s continued role in the eradication of AIDS around the globe.

When President Donald Trump initially proposed a 20 percent reduction to this year’s PEPFAR funding, Congress rejected the cuts, resulting in flat funding for the 2019 appropriation. US Global AIDS coordinator Deborah Birx described the new budget as a good thing, saying that it requires spending to be as impactful and efficient as possible. Evangelicals involved in the AIDS fights previously pressured the Obama administration to keep funding high.

Globally, the investment is working. Data show HIV/AIDS infection rates dropping and access to treatment rising. According to the UNAIDS, about 38 million people around the globe were living with HIV in the last year and 23.3 million of those infected had access to antiretroviral therapy to treat the disease.

Patrick Purtill, director of legislative affairs for the Faith and Freedom Coalition, noted in the 27 Million Lives documentary that PEPFAR organizers “had to involve the faith community, both domestically here in the United States and maybe more importantly in the host countries where we were trying to deliver the services.”

In many PEPFAR-receiving countries, faith-based organizations (FBOs) and ministries represent the largest provider of HIV services outside the government.

“FBOs and other religious institutions have been on the ground for decades, even centuries, providing care, and treatment to communities outside the reach of public health systems, and acting as a voice for the voiceless,” according to PEPFAR’s 2019 report. Globally, faith-based organizations were among the first to respond to children suffering from or orphaned by HIV/AIDS, it said.

Because these organizations are uniquely situated in communities, they have been able to offer holistic responses that go beyond the disease itself.

“You have outreach for people who are affected, not just people who are infected,” said Anita Smith of Children’s AIDS Fund International (CAFI), which works with local organizations to care for children and families in Malawi, Uganda, Zambia, South Africa, Russia, and the US.

LifeNet International partnered with 175 clinics in rural communities in Burundi, Malawi, Democratic Republic of Congo, and Uganda. Its clinics provide a full range of services and are run by local healthcare workers. LifeNet staff train clinicians in embodying a Christian message of compassionate care in their approach to testing, hoping to reduce the stigma surrounding HIV/AIDS.

“We’re not bringing in medical teams,” said Dave Evans, president of LifeNet International. “We are just focused on building the capacity of national Christians to provide better care and run clinics with more sustainability.”

In its 15 years of programming, PEPFAR has also recognized partnerships faith-based organizations as a factor making its initiatives more sustainable and helping programs transition to local leadership.

AIDS advocates believe the dramatic reduction in AIDS infections and increased life expectancy are reasons to celebrate, but without vigilance, another generation could be lost.

“Without continued work, the AIDS relief work will become its own worst enemy,” said Mark Rodgers, an architect of PEPFAR and principal of the Clapham Group. “Millions of lives have been saved that would have otherwise been lost to AIDS. But as this rescued generation enters sexual maturity, it needs to understand AIDS prevention so that it does not repeat the mistakes that nearly led to its extinction.”

Relief workers note that girls and young women in Africa are at particular risk for HIV, and without continued education and support, the pandemic could easily return to infect another generation.

“When you don’t pay attention to pandemic diseases, they come back,” Gerson said. “And there is a significant problem with new infections in Africans, particularly with young women, that has to be confronted.”

PEPFAR has also provided resources to church leaders in sub-Saharan Africa to advise against the practice of “faith healing” or miracle cures for HIV/AIDS, noting that such promises discourage patients from adhering to antiretroviral therapy and promote stigma around the disease.

Debbie Dortzbach, global director of health and social development with World Relief, said faith-based communities continue to have opportunities and obligations to serve on the front lines of AIDS prevention and treatment. World Relief volunteers in many communities go door to door, providing information, Bible studies, and practical support.

And while the work on AIDS has transformed the disease from a deadly disease to a chronic disease in much of the world, Dortzbach said the church should not stop now: “Christ compels us to be image bearers of his compassion and righteousness. We are absolutely obligated as God’s people to work until HIV itself never again infects one more person.”