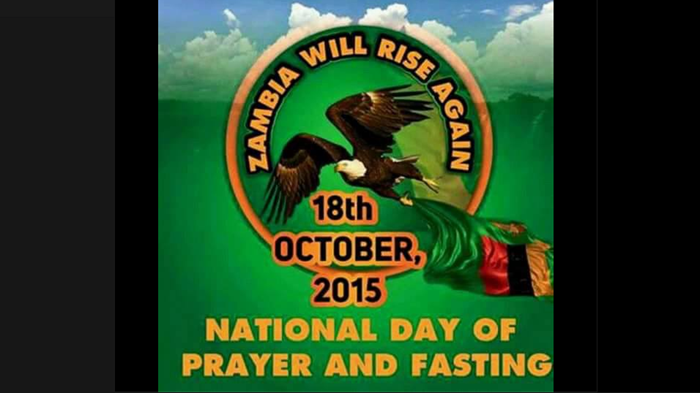 Home of the “world’s worst currency” and a sputtering economy, Zambia needed a national day of prayer. At least, its new president decided it did. So last Sunday, the southwestern African nation had its first.

"I wish to thank the Almighty God for allowing us to assemble and observe the day of repentance, reconciliation, prayer, and fasting,” said Edgar Lungu in his public address. “I personally believe that since we humbled ourselves as a people and have sincerely cried out to the God of Abraham, Isaac, and Jacob, he has heard our cry, has forgiven our sins, and will surely heal our land.”

Zambia, regarded as missionary David Livingstone's greatest legacy, is officially a Christian nation. But it isn't always heaven on earth.

Lungu assumed office in January after his predecessor’s death. Since that time, the price of copper, one of Zambia’s main exports, has consistently fallen. Water shortages caused by drought have crippled the country’s hydropower plants—at times by cutting power for more than half the day, Bloomberg News reported. The bad weather has also hurt the corn crop, which has driven up inflation. In this year alone, Zambia’s currency has dropped nearly 50 percent against the US dollar.

“Only Jesus Christ, the son of God, can resolve the energy crisis overnight because the people in [the ruling Patriot Front party] are not supernatural beings,” said chief government spokesperson Chishimba Kambwili as reported by The Post. Lungu called for bars and restaurants to be shut down and soccer games to be cancelled during the day of prayer.

Lungu’s declaration was backed by the country’s Catholic, mainline, and evangelical groups.

"We congratulate President Lungu for putting God as number one in his life. He has shown it, and may kings respect him," bishop Peter Ndhlovu of the Bible Gospel Church in Africa told the Times of Zambia.

Leaders from the Council of Churches in Zambia authored an op-ed for the Zambian Watchdog offering “prayerful reflection” on why Zambians should be repenting and fasting.

“Even if we are badly hurt by the disrespect, poverty, a weak kwacha [the local currency], load shedding, and general distress in our midst, even if we hope and pray that this Day of Repentance, Fasting, and Prayer will be part of a turnaround, of God lifting us up again, even then, we still can and should thank God, since our whole life should be a life of thanksgiving,” they wrote.

The Evangelical Fellowship of Zambia (EFZ) also praised the movement. "The event was successful as people gathered. We received reports of people gathering in different places across the country who braved the sun to participate in the day of prayer and fasting," EFZ executive director Pukuta Mwanza told the Times of Zambia.

But Zambia opposition party leader Hakainde Hichilema criticized Lungu’s proclamation as “not genuine,” and listed issues the government should confront before calling for prayer and reconciliation. "Prayers and reconciliation for some of us who are believers and regularly attend church service in our Christian nation is a major undertaking and we do this with very genuine intentions," he wrote in an op-ed for the Lusaka Voice. "It is clear to us that there is an attempt to abrogate commandment 3 [don't take the Lord's name in vain] with regard to the call for a dedicated day of prayers and reconciliation."

One Anglican priest said God will punish Lungu and his team if the declaration was not done in good faith. “When you declare a day of prayers, you must indicate your intentions. Why are you calling for those prayers?” Richard Luonde said in an interview with the Zambian Watchdog. “If you are a sincere man of God, it will not be up to you to declare that you are religious, people will declare you to be religious."

Vice president Sunday Chanda defended the proclamation in the Lusaka Voice, arguing that other countries, including the United States, “have embraced the national day of prayer beyond partisan, religious, and other divides.”

Zambia is 68 percent Protestant and 21 percent Catholic, according to the Pew-Templeton Global Religious Futures Project. Zambia's constitution states that Christianity is the country’s official religion, though a later amendment guarantees freedom of religion for all.

But not everyone believes that the country takes its faith seriously; in 2000, CT reported that “eight years after Zambia became a Christian nation, the title is not convincing.”

Among CT's past coverage of Zambia is an in-depth report on how it became “one African nation under God.”

First Day of Prayer Draws Debate in One of ...