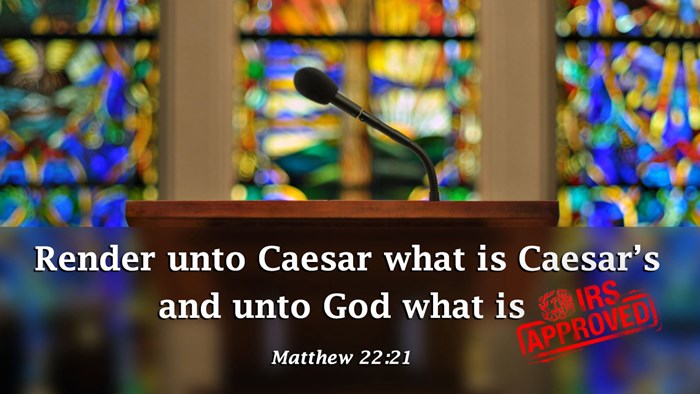 As almost 1,500 pastors attempt to provoke the IRS this Sunday by preaching political messages from their pulpits, a recent survey finds that Americans increasingly agree they should have such a right—including the religiously unaffiliated.

This weekend will be the seventh Pulpit Freedom Sunday, coordinated by the Alliance Defending Freedom (ADF) to encourage pastors to break an existing law that prohibits registered nonprofit organizations from electioneering.

The Pew Research Center recently reported that nearly half of Americans (49 percent) now believe that churches (and other houses of worship) should express their views on social and political issues—including two-thirds of white evangelicals, more than half of black Protestants (who mostly identify as evangelicals), and one-third of so-called religious "nones." Support has risen most among mainline Protestants, from 35 percent in August 2010 to 49 percent in September 2014. 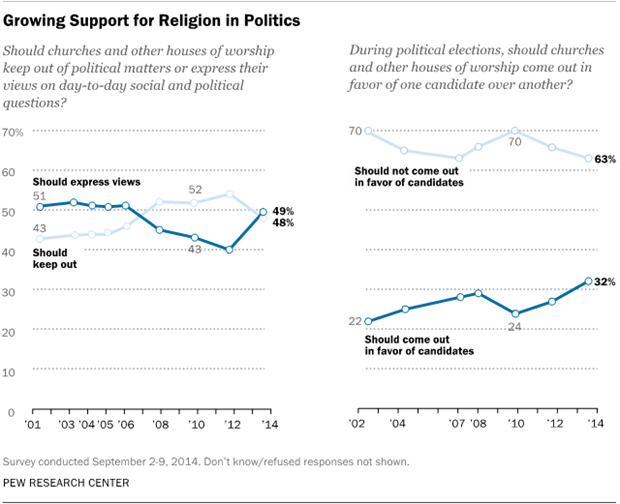 While most Americans still believe churches should not be allowed to outright endorse candidates, Pew reports "significant movement in the direction of more support" of this right. One-third of Americans now agree that churches should be allowed to favor candidates, and support among nones increased approximately 50 percent. In 2010, 26 percent of the religiously affiliated and 15 percent of the nones said they would favor churches publicly backing candidates; in 2014, the percentages increased to 35 and 23 percent, respectively. Among white evangelicals, 42% now favor pastors having this right, as do 39% of black Protestants. 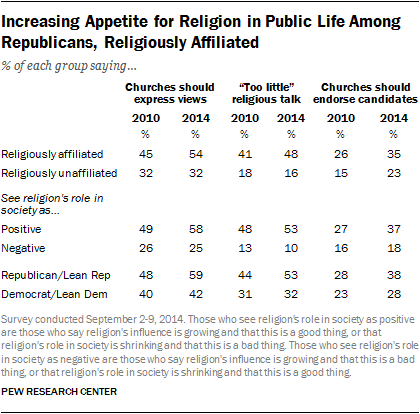 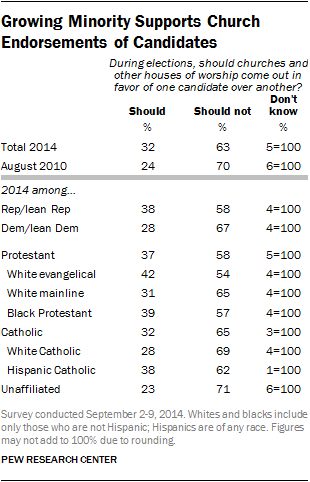 CT has noted how ADF hopes to provoke the IRS into (ironically) punishing pastors in order to lead the federal government to review and overturn the law in question: the Johnson Amendment. The initiative even gained an unexpected ally last year in Sen. Charles Grassley and the Commission on Accountability and Policy for Religious Organizations (CAPRO).

The ADF has a strange bedfellow of sorts in its hope for a confrontation: An atheist legal group, the Freedom From Religion Foundation, also wants the IRS to investigate such activity (but hopes for an opposite outcome than ADF). It dropped a related lawsuit this summer after the IRS agreed to investigate and enforce electioneering prohibitions.

While ADF lists thousands of churches that have participated in Pulpit Freedom Sunday over the years, the IRS has only flagged a much smaller number of churches as problematic.

CT's sister blog, Church Law and Tax, notes that the IRS had put church reviews on hold since 2009 when a Minnesota church challenged the audit process.

LifeWay Research, which offers five things to know about "the IRS and the pulpit," has found in surveys that 9 in 10 Protestant pastors believe pastors should not preach politics from the pulpit, but also 9 in 10 believe that the government shouldn't prohibit the practice.