Only two Anderson University students have filed reports on sexual violence or harassment so far this year, according to Title IX coordinator Dianne King.

That number might seem encouraging, but King is actually worried about it. Just because someone doesn’t report something doesn’t mean it didn’t happen.

Anderson is a private liberal arts college affiliated with the South Carolina Baptist Convention. The school, like all colleges and universities that receive federal funding, is required to enforce Title IX, a federal civil rights law prohibiting sex-based discrimination. That includes tracking sexual violence and attempting to prevent it.

That’s a challenge for every college and university. And some Christian schools may inadvertently discourage reporting, with policies that prohibit all alcohol, drug use, and sexual activity outside of marriage. That can leave coordinators like King second-guessing their own data.

“There are students who are having sex. We know that, and that there are those who misbehave in a sexual manner, whether it’s sexual harassment, sexual assault, stalking, or interpersonal violence,” King told CT. “We have those things here.”

There is some evidence that sexual assault is slightly less likely at religious colleges, though numbers are hard to come by. Overall, more than 26 percent of female undergraduates experience rape or sexual assault, according to statistics from the Rape, Abuse & Incest National Network (RAINN). But the same data shows that only about 1 out of every 5 female students who are assaulted report it to authorities—and the reporting percentage is even lower among the 7 percent of male undergraduates who are raped or assaulted.

Some victims blame themselves for what happened and assume others will too. For many, the immediate negative consequences—from social stigma to punishment for other things that were happening—outweigh the distant possibility of justice.

One way to raise reporting rates, according to the US Department of Education, is to offer amnesty for student handbook violations that occurred alongside the more serious crimes of sexual violence. Anderson has officially written this into its policy. Though the school does not permit students to use drugs or alcohol, it does not punish people if they disclose those violations in the process of reporting sexual violence.

“A sexual assault is much more serious than a party where the drinking gets a little out of hand,” said King, who is also the school’s associate vice president for student development and dean of student success. “We need to be able to investigate the assault above everything else. That’s what Title IX requires, and we’re committed to doing that.”

What Christian colleges like Anderson don’t want to do is create a culture that discourages reporting, even inadvertently. That can add to the traumatic experience and ensure that sexual violence goes unchecked.

An investigation by ProPublica found the Lynchburg, Virginia, school founded by Jerry Falwell Sr. discouraged and dismissed student reports of sexual assault. Former students told ProPublica that when people reported assault or rape, the school threatened to punish them for violations of “The Liberty Way,” including being alone with a man. 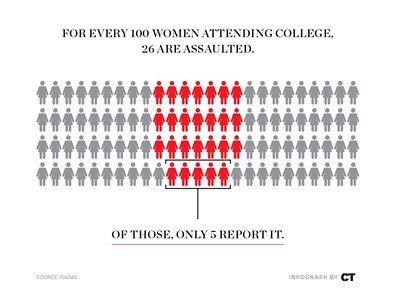 Liberty settled the lawsuit in May. The terms of the settlement are protected by non-disclosure agreements. The school announced that it “had already undertaken various initiatives” to better protect women on campus. Liberty also said it would revise its amnesty policy to clarify that people reporting sexual violence should not be punished.

Brigham Young University (BYU), affiliated with the Church of Jesus Christ of Latter-day Saints, saw a 400 percent increase in Title IX reports when it reformed its policies and procedures five years ago. The number of reports at the Provo, Utah, school has steadily increased since then. BYU Title IX coordinator Tiffany Turley told CT that doesn’t signal an increase in incidents but, more likely, an increase in how comfortable students feel reporting.

“In fact, in the past most of our reports came from mandatory campus reporters” such as professors and school nurses, Turley said. “But now the majority of our reports come directly from students themselves, which shows the trust students are gaining in our office.”

A recent campus climate survey presents a complicated picture, however. Nearly 8 out of 10 students said they thought BYU was doing a good job of caring for victims of sexual violence. But among the 538 women and 95 men who said they experienced some form of unwanted sexual contact in the previous 12 months, only 27 percent reported it to an authority. The students were more likely to trust a friend (61%) or roommate (42%) than the Title IX office (3%) or the school’s counseling service (5%).

The Mormon school, like evangelical colleges and universities, continues to focus on raising awareness about what the Title IX office does and look for ways to encourage more people to report.

Turley believes that not punishing the people who report sexual violence has been one critical way of increasing trust. That doesn’t mean that BYU or evangelical schools don’t care about the code of conduct, though. They believe those policies are good for students and can provide some protection.

“I appreciate working at a school that has such a strong, faith-based code of conduct,” Turley said. “While I reiterate that sexual assault/misconduct is never the victim’s fault, I can anecdotally say that we would likely not see at least 75 percent of the reports we do if people followed the Honor Code.”

At least half of sexual assaults among all demographics involve alcohol consumption by one or both parties, according to a recent report from the National Institutes of Health. One study found that a training program targeting excessive drinking among college students resulted in a 47 percent reduction in incidents of rape.

That’s one reason Gardner-Webb University, an evangelical college in Boiling Springs, North Carolina, has a dry campus, prohibiting all alcohol use. It also implemented an amnesty policy last fall to encourage more reporting, interim Title IX coordinator Lesley Villarose told CT. The school revised its Title IX policies and worked with a law firm to create a training program for people who could serve as case investigators and advisers.

In her interim capacity, Villarose launched what she called a “Red Flag Campaign” to give students more information about sexual violence. Villarose saw a similar program have a positive impact at Averett University, in Danville, Virginia. She and her team posted flyers around the school, hosted training sessions, and put information on social media.

“We certainly hit the tip of the iceberg with it, but . . . we got a lot of wonderful feedback from our students,” she said.

The college also started using a smartphone app that sends out emergency notifications and allows people to report sexual violence confidentially. If reports of sexual violence go up, Villarose will consider the work successful.

When people do report, it’s kind of a relief, even as colleges aim to also reduce the number of assaults taking place on their campuses. Title IX coordinators say they’re honored to be able to help people—and they agonize over the students who need help but haven’t found a way to ask for it.

“I don’t think it’s ever enough,” said King at Anderson, “but we do all that
we can.”

Hannah McClellan is a reporter in North Carolina.