I have a Bible from my youth, one I purchased for myself when I was in middle school. I underlined a number of verses during those formative years of adolescence. Flipping through the pages now, I see a common thread in the passages I singled out. They are predominantly calls to action, the instructional sections that mapped out an identifiable way for me to feel I was doing enough to satisfy God.

One of my greatest recurring anxieties is the possibility that I might in some way not be taking my sin seriously enough. That sounds ultraspiritual, but it is more fear-driven than pious. I review not just my actions but every internal agenda, and I come to the same conclusion as Jeremiah: The heart is a convoluted mess (Jer. 17:9). I scrape my mind for any residue of wrong that might need to be confessed and eradicated, only to discover new twisted layers underneath. Pulling the lid off of my soul felt like staring into a bottomless cauldron of horrors.

It never occurs to me in the midst of all the soul-scrubbing that perhaps part of what God desires for me is freedom from the self-loathing and cruel harshness that tries to pass itself off as making me more like him. The very self-admonishment I equate with holiness is in fact distorting my perception of God.

Pursuing the path of taking “full responsibility” for my sin only pushes me toward despair, because I find that the problem is deeper and more pervasive in me than I can begin to address (“Although I want to do good, evil is right there with me”—Romans 7:21). I am unable to discern my true motivations with certainty. The more I dissect my confessions, the less adequate they seem, pulling me further down the rabbit hole of introspection.

My attempts to fully own my sin end up competing with my ability to accept what Christ did on my behalf. He went to the cross precisely because we are all incapable of taking full responsibility for our own sin.

Martin Luther addressed the fallacy of such thinking: “This attitude springs from a false conception of sin, the conception that sin is a small matter, easily taken care of by good works; that we must present ourselves unto God with a good conscience; that we must feel no sin before we may feel that Christ was given for our sins.”

The alternative to being responsible is not being irresponsible—it is trusting God with the responsibility, the way a child trusts a parent with their care.

In his book exploring OCD and faith, Ian Osborn shares the story of Thérèse of Lisieux. Thérèse was born in the late 19th century. She was about as thoroughly religious as someone can be. She received her education in a Benedictine school, then went on to become a Carmelite nun. Carmelites maintain a very strict lifestyle, praying for long hours every day, enduring very ascetic conditions, and observing complete silence for extended periods. If anybody exemplified diligently working to put on their own armor, it was Thérèse.

Despite her devotion, uncontrollable doubts and fears haunted her. She tried performing severe acts of self-punishment to counter what was happening in her mind, but the effort provided no comfort to her conscience.

Unable to find any method of alleviating her mental distress, Thérèse concluded she needed a fundamentally different approach to God. After much prayer and reflection on Scripture, she developed what she came to call “the Little Way.”

It was a radical departure from the rigid moralism of her time. She focused on all the verses that portray God caring for the small and humble—like Matthew 18:3: “I tell you the truth, unless you change and become like little children, you will never enter the kingdom of heaven.”

Thérèse concluded that God’s primary request of her was to remember her own smallness. Rather than cultivate self-sufficiency, she sought to adopt the attitude of a young child relying on a parent for everything. 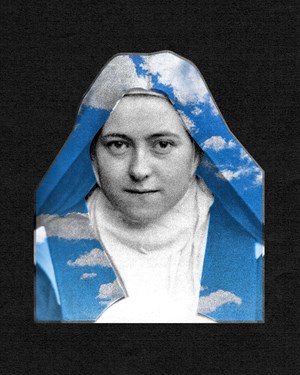 Initially, the Little Way sounds as if it goes against everything young Christians are taught about healthy discipleship. Scripture admonishes us to “grow up in every way” and to not be “infants, tossed back and forth” (Eph. 4:14–15). Where does maturity come into play if we are staying small?

Thérèse’s point was not to encourage us to stay stuck in some kind of stunted development, but to remain in a state of total dependence. Rather than working hard to move past the need for more grace, we embrace our perpetual reliance on it.

What does staying small look like? Author Pia Mellody identified five essential characteristics that describe the natural state of a child:

Valuable: Every child has inherent worth.

Imperfect: Learning and making mistakes are part of growing up.

Dependent: Children should not need to fend for themselves.

All these characteristics translate equally well to describe what it looks like to live as God’s children. Do we believe we are of great value to him? Can we acknowledge and accept our vulnerability? Could we allow our imperfection? What about choosing to count on God instead of feverishly attempting to measure up? And are we able to show grace to ourselves, knowing our faith is still developing and we do not yet see what we will become?

It was C. S. Lewis who said, “When I became a man, I put away childish things, including the fear of childishness and the desire to be very grown up.”

Spiritual maturity never means independence. And God does not call us to count on our own self-protection. Instead, he offers us something completely different. Isaiah tells us this:

Here, the armor of God is worn by none other than God himself. He puts it on to bring the salvation nobody else could make happen. It is rescue. It is powerful. It is swift and sure. The armor represents God’s action on our behalf.

This way of looking at it changes everything. It means when we take up (or sink into) the armor of God, we are not simply grabbing a resource he has put at our disposal to grow our own righteousness. We are letting God outfit us with what he’s done for us. We are choosing to stay small and rely solely on his efforts for our defense.

I have multiple options I go to regularly when I am in self-preservation mode. I call it the Armor of Me, which includes the Belt of Denial, the Breastplate of Humor, Feet Ready with a Plan of Escape, the Shield of Perfectionism, the Helmet of Avoidance, and the Sword of Blame. My armor has many additional elements God’s doesn’t offer, such as the shoulder pads of delusion, the face mask of people-pleasing, and the shin guards of distraction.

Psychologists would refer to these components as feelings defenses—ways of shielding ourselves from the pain of difficult emotions. And in times of trauma, they prove incredibly valuable. Feelings defenses are a God-given measure of safety and relief when the world is unbearable.

We pick them up when we are very young, and they become so ingrained in our responses that they are almost instinctual. A threat appears, and immediately our defenses are right there to meet it.

But over time, they outstay their usefulness. We begin to live in them permanently. They start to shape our choices regardless of the situation. That’s when they become armor, a second skin we never shed. The humor that served well to break tension during a quarrel now stands in the way when anyone tries to get close. The “happy place” in your mind that got you through a crisis soon occupies all your thoughts and makes real life look even more miserable. The perfectionism that rewarded you with a job well done turns into an unrelenting, daily taskmaster.

If I’m going to wear the armor of God, I first need to remove the Armor of Me. I can’t hold the shield of perfectionism and the shield of faith at the same time. The belt of truth won’t fit if I’m wrapped in denial.

I have been trying to wear both, to supplement God’s armor with a secondary layer of protection. I thought it was helping, and instead it is just in the way. That means unlearning patterns that have become second nature.

To return to the “Little Way” of Thérèse, staying small means there is a moment of trust required as we let go of the defense systems we’ve adopted to feel safe and avoid overwhelming feelings. We hand responsibility for our well-being back to God, our good and loving Father.

Once I became aware of all these defenses I was using, I started after them with a vengeance. Removing the Armor of Me became my all-consuming mission. This quickly took me to a place of self-loathing, because I discovered just how tightly I had wrapped my armor around me and how difficult it was to step out of it. I became highly frustrated and ashamed over my lack of progress. The anxiety over attempting to change intensified. I felt this huge responsibility to fix myself, and I couldn’t do it.

But maybe instead of shutting down, I could invite God to help me ask questions. What was generating my fears? What was sending my very being into so much panic? If I could identify and care for those places, my self-protection mechanisms might begin dissolving on their own. My mind and body would no longer need to be on constant high alert because the perceived threat would no longer feel as threatening.

It all needs time. A friend of mine who struggles with alcoholism once described the journey to recovery as “10 miles in, 10 miles out.” We cannot rush through what is a lifelong process.

And our need for help changing becomes one more opportunity to stay small. We can entrust the work of being transformed to God, letting Jesus replace our backwards, inside-out armor with his garments of praise.

J. D. Peabody is a writer and lead pastor of New Day Church in Federal Way, Washington. This essay is adapted from Perfectly Suited: The Armor of God for the Anxious Mind by J. D. Peabody. © Aspire Press, a division of Tyndale Publishing House (2022).

[ This article is also available in Português and Français. ]