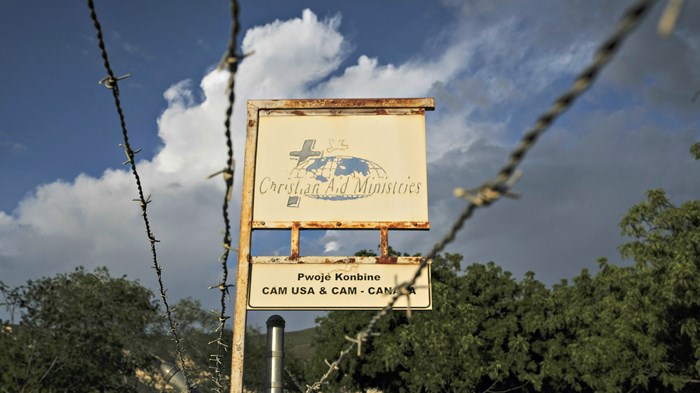 Image: Matias Delacroix / AP Photo
This Oct. 21, 2021, photo shows a sign outside Christian Aid Ministries in Titanyen, Haiti, which had 17 of their members kidnapped by the 400 Mawozo gang. Catholic priest Jean-Nicaisse Milien was kidnapped for 20 days along with other priests, nuns, and civilians in April by same gang.

Update (Dec. 16): All 17 hostages have now been released, according to Christian Aid Ministries and Haitian police.

A Christian aid group based in Ohio announced Monday that a violent gang in Haiti has released three more hostages, while another 12 remain abducted.

The statement from Christian Aid Ministries (CAM) said the people were released on Sunday in Haiti and are “safe and seem to be in good spirits.” The group provided no further details.

On November 21, CAM announced that the 400 Mawozo gang had released the first two hostages of a group of 17 kidnapped in mid-October after visiting an orphanage. There are 12 adults and five children in the group of 16 US citizens and one Canadian, including an 8-month-old.

The leader of the 400 Mawozo gang has threatened to kill the hostages unless his demands are met. Authorities have said the gang was seeking $1 million per person, although it wasn’t immediately clear that included the children in the group.

“We are thankful to God that three more hostages were released last night,” stated CAM, an Anabaptist missions organization based in Berlin, Ohio. “As with the previous release, we are not able to provide the names of the people released, the circumstances of the release, or any other details.”

The group reiterated its request—proposed by “a Haitian brother in Christ”—for supporters to devote Monday through Wednesday as days of prayer and fasting “to intercede for those who are still being held as well as those who have been released.” (Editor’s note: Throughout the ordeal, the prayers of CAM’s Anabaptist supporters have been noteworthy.)

“We recognize the power of prayer and fasting,” stated CAM. “We believe that it is Satan’s goal to destroy the work of God through strongholds of darkness. When Jesus and His disciples sought to overcome such strongholds in Matthew 17:21, Jesus said, ‘this kind does not go out except by prayer and fasting.’”

The release comes amid an ongoing spike in kidnappings in the capital of Port-au-Prince and elsewhere in Haiti, which is struggling to recover from the July 7 presidential assassination, a 7.2 magnitude deadly earthquake that struck in mid-August, and a severe fuel shortage.

On Sunday, a gang leader known as “Ti Lapli” posted a YouTube video warning people not to cross in upcoming days through the Martissant community, which has been the site of violent clashes between warring gangs.

“Insecurity has increased,” the gang leader said. “I invite the people of Martissant to stock up on food and gasoline. The next few days will be difficult … We will not remain with our arms crossed in face of those who try to destroy us.”

CAM had urged a day of prayer and fasting for Haiti on December 1.

“As we work through the kidnapping of our workers, we are aware that numerous kidnappings—mostly of Haitian people—continue to take place in Haiti,” the group stated. “[M]illions of Haitians face huge challenges, encounter danger, and struggle to provide for themselves. Pray for our Haitian friends.”

Haitian Christian leaders have told CT they are eager for the missionaries’ release yet fear what gangs will do next.