The “arty pilgrimage” through Leicestershire has given her a chance to share and deepen her faith.
Rachel Pfeiffer|September 16, 2022
Image: Courtesy of Hayley Fern

As England loses a number of its churches and rethinks the role of church buildings, one artist is finding a new appreciation for the over 300 churches in her hometown by drawing each and every one.

Art teacher Hayley Fern pulled out a new sketchbook during a visit to Leicester Cathedral and drew the 900-year-old Gothic-style church, with its pointed arch windows and 220-foot spire.

“Somebody actually said, ‘Oh, are you doing all Leicestershire churches?’” Fern said. “I said, ‘Oh, that’s a good idea. I might just do that.’”

And that’s how her “arty pilgrimage” began.

In her county in central England, there are over 300 Anglican churches, quite a lot but still an obtainable goal, she decided. With each church she adds to her sketchbook—and her social media feeds—she’s learned about nearby places she’d never been or only passed through.

“When you’re visiting a church, you go to the absolute heart of the place. You’re going to the original center of the village or town, the highest point, and it’s often the oldest part,” Fern said. “I’m now really discovering that even the villages and towns that I wasn’t necessarily drawn to actually have these beautiful centers, and the community is really evident there as well.”

A former freelance illustrator, she uses a fine waterproof pen to draw the details: porches and porticos, stained glass windows, neat bricks and cobblestone. Then she fills in with watercolor. Each drawing gets labeled with the church name and town, sometimes details about its founding date. She leaves behind a card saying, “I drew your church!” so the community can see the results and follow her project.

Fern meets locals who are grateful someone is taking time to appreciate and honor the church in their town. Seeing an artist’s attention directs them to what they haven’t noticed before.

“I don’t think anyone fails to realize how beautiful their church is, but it’s actually stopping and taking that time, isn’t it? I think that’s what I’m encouraging people to do a little bit as well,” Fern said.

Even for people who don’t go to church regularly—before the pandemic, fewer than 1 percent of the population attended Church of England services on a given Sunday—the old landmarks in their towns are still a place they feel proud of and connect with.

Leicestershire is a rolling countryside dotted with towns and historic sites that can be traced back nearly 2,000 years. Some of the church buildings that made their way into Fern’s notebooks have been houses of worship for centuries.

At her husband’s suggestion, Fern created social media accounts (@HayleyFern4 on Twitter and @hayleydrawschurches on Instagram) to post her work so people beyond passersby could see. The accounts gained a following, and as more and more people have become interested in her work, Fern has had opportunities to discuss her faith.

“It didn’t occur to me at all that doing art was in any way evangelical, but I’ve had so many conversations now. I’ve had so many people that have come and talk to me about their faith, people that maybe didn’t really have someone to talk to, or didn’t have the excuse to discuss their feelings about going to church or not going to church,” said Fern, a member of the Church of England.

“It’s made me a more visible Christian because people generally assume I’m a Christian because I’m doing it. I think in a lot of ways, it’s opened up more conversations than anything else I’ve ever done regarding my faith.”

Sometimes sharing her faith has been as simple as just listening. At one church, a man sat down by Fern after laying flowers on his wife’s grave. He talked about his wife and how much he missed her, and Fern was grateful she had been there simply to lend an ear.

Fern believes drawing the churches has been a great way for her to reflect, express her faith, and worship. She believes that God-given gifts should be used for his glory, whatever that looks like.

From a young age, Fern learned to draw from her grandfather who also loved art. She decided to pursue art in college, graduating with a degree in art textiles. She worked in a dress shop before becoming a freelance illustrator so she could stay at home with her kids.

Once her kids grew older, Fern took a job as an art teacher. She works full days during the term, using her weekends to catch up on housework and rest and her holidays to visit churches and draw. 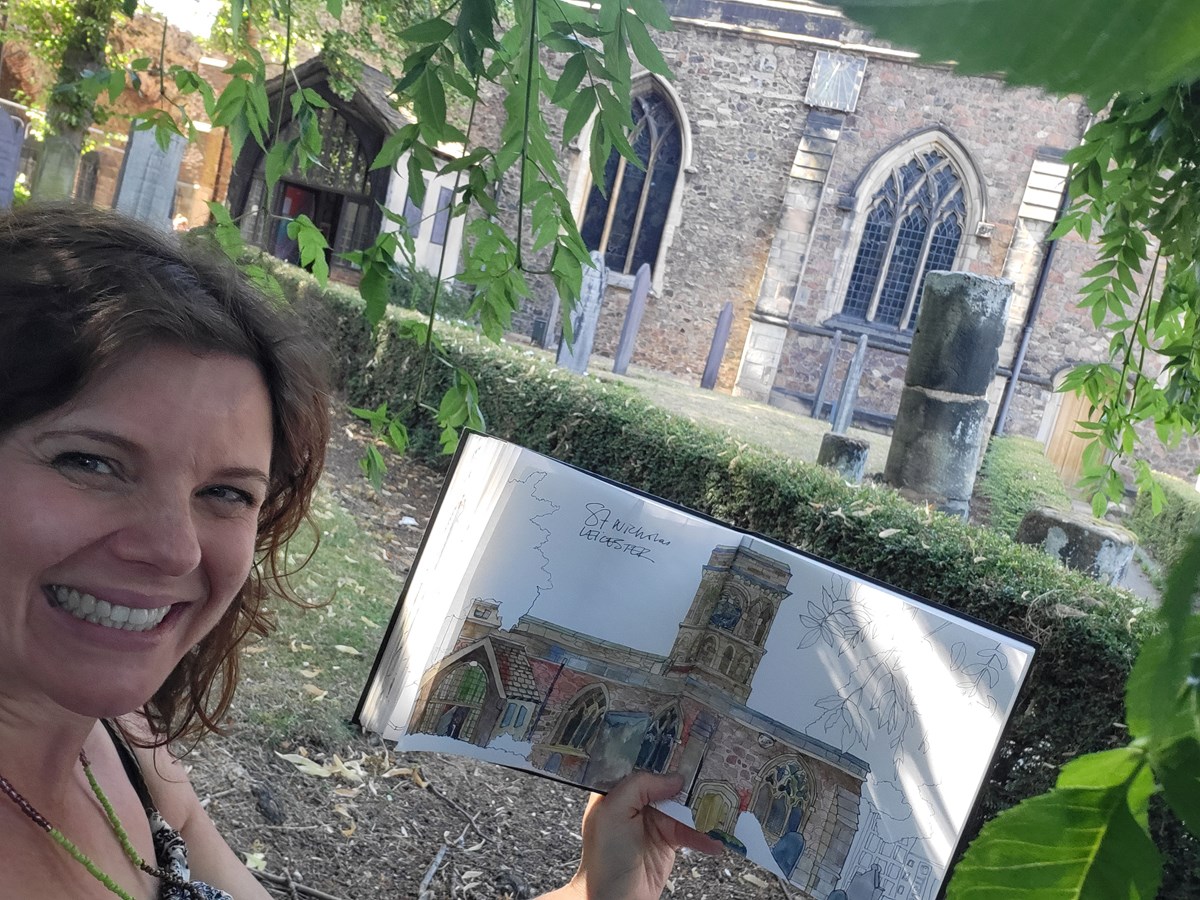 When going to a new church, she doesn’t look at pictures beforehand, so she can have a “wow” moment when seeing it in person for the first time.

When she sits down to draw, using a fine line pen helps her to not overthink and commit to it quickly. When painting a church, she pays attention to key details that give the church its character.

“I really enjoy exploring the different colors and tones of each church because I think that’s massively part of its history. Often you can tell the relationship between the stones and the area,” Fern said.

She doesn’t paint the green of the trees or the blue of the sky, ensuring the focus remains solely on the church buildings rather than the landscape around them. It also helps give the project a consistent style from church to church.

Amid all the centuries-old stone churches in Leicestershire, a 1923 church building stood out.

“I’ve not seen anything in that sort of art deco ’20s style before or since. … That was a real favorite. It was incredibly satisfying to draw,” Fern said. “I think if I see something architecturally very different now, that is such a delight to draw.”

In the future, Fern hopes the sketches might become a published book. She serves on her parochial church council, a committee of church staff as well as members that deals with all sorts of church matters from budgets to outreach efforts. Because of this, Fern knows how the proceeds from such a project could help churches financially.

“I’d love to be able to support churches, and if some good can come of that, that would be amazing,” she said.

As she continues her artistic pilgrimage, Fern reminds her newfound following that this is a project that will take her years to finish, as she’s drawn 55 so far.

Regardless of how long the project takes, Fern plans to faithfully use her time off to visit and draw new churches, slowly filling her sketchbook with buildings that have remained at the centers of their communities for years, sacred spaces that have stood the tests of time.