[This article is also available in Thai]

After Pimduan “Duan” Nagaviroj heard about the drowning death of 37-year-old Nida Patcharaveerapong in February, she joined millions of other Thais in watching the livestream of the funeral honoring the famous TV actress, better known as Tangmo.

Duan, who works as a consul of the Royal Thai Consulate General in Penang, Malaysia, was intrigued by the gospel message presented in the three-day memorial.

“I paid attention to everything said and was most impressed by the message that Christians do not fear death,” she said. “I learned that God loves everyone, and I decided that I wanted to know him.”

After the third night of the service, she messaged the church contact listed on the livestream to learn more about Christianity, and the church staff encouraged her to find a local church. She visited Wesley Methodist Church in Penang and joined the church’s online Alpha Course, an evangelism program. “After only a few lessons, I accepted Jesus Christ as my Savior and I wanted to be baptized,” she said.

Pastors in Bangkok say Tangmo’s memorial service in March was the largest evangelistic outreach ever put on in Thailand, where 93 percent of the population is Buddhist and only about 1 percent Christian. While Tangmo was known for her appearances in Thai dramas and her tabloid-headline exploits, she also stood out as an outspoken Christian.

The livestream of the memorial brought in 12 million views, and Thai pastors say that afterward, they saw an increase in newcomers interested in learning more about Christianity.

“God opened a door through the death of a woman who loved God immensely,” said Thongchai Pradubchananurat, who pastors Bangkok’s Church of Joy and preached at Tangmo’s funeral. “Tangmo’s life was not perfect, but she was saved by Jesus.”

Tangmo was born in 1984, and after her parents split up when she was young, she was raised by her Christian father. She attended a Christian private school, though she rarely went to church. After she placed fourth in Miss Teen Thailand in 2002, a TV producer approached her about acting, launching her entertainment career. Tangmo soon grew a following for her work in popular dramas such as Bangkok Love Stories 2: Innocence, Club Friday The Series, and ใบไม้ที่ปลิดปลิว (The Fallen Leaf), as well as singing and modeling.

Tangmo also gained visibility through her relationship with actor and singer Pakin “Tono” Kumwilaisuk. By 2013, the two were living together. When Tangmo wanted a Christian wedding, her friend recommended she meet with Chatchai Charuwatee, pastor at Binding Hearts Church in Bangkok.

After Charuwatee shared his testimony with the pair, Tono said he wanted to become a Christian while Tangmo rededicated her life to Christ, according to the pastor. Charuwatee taught them the Bible and married them in December 2013. A few months later, he baptized the couple.

Afterward, they joined a cell group at Pradubchananurat’s church, attending regularly even as their marriage fell apart and ended in divorce in 2015. In the aftermath, Tangmo struggled with depression and was hospitalized for attempting suicide. Still, Pradubchananurat said Tangmo “was growing in her Christian faith” and continued to be involved in the church.

Tangmo spoke openly about Christianity in interviews. As a guest on the TV show Disclosure in 2017, the actress shocked the hosts when she said she wanted to be a “full-time minister of God.” She explained that she attended church three times a week for worship and small groups, and she’s seen her life change.

Pradubchananurat said Tangmo had planned to go into full-time ministry after finishing her college degree. Yet just a month after graduation, Tangmo died after falling off a speedboat into the Chao Phraya River in Bangkok.

The mysterious circumstances surrounding her death led to massive media interest and coverage of her funeral. Fans speculated online whether the death had been an accident or attempted murder, scouring video footage, questioning the reliability of Tangmo’s friends on the boat, and poking holes in the police’s narrative. Six months after her death, prosecutors charged six suspects for recklessness leading to death.

Pradubchananurat noted that 600 family members, friends, fans, and reporters attended each night of the funeral at Liberty Church in Bangkok, and the livestream reached millions of Thais. Buddhists who had never been to church listened to worship songs, sermons by Pradubchananurat and Charuwatee, and the testimony of Tangmo’s life.

Pradubchananurat preached on John 13:1, noting that no one knows when they will die, so they should be prepared and show loved ones they care while they are still alive. He also spoke about how “to live is Christ and to die is gain” (Phil. 1:21) and the need to live a God-pleasing life, blessing others and introducing others to Jesus Christ. 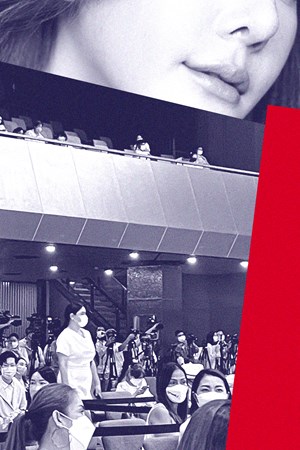 In the months after the service, several hundred newcomers visited Liberty Church. CGNTV Thailand, a Korea-based Christian TV network, said that in March alone, 120 people contacted them about becoming Christians, a sixfold increase. Several other churches also noted that they saw more newcomers to their worship services after the funeral.

Pradubchananurat himself has seen the memorial’s impact in his life: When he attended the cremation of his sister-in-law at a Buddhist temple three months later, a monk told him he liked his sermon. Pradubchananurat gave him two Christian books to read. Recently as Pradubchananurat went to get a haircut, the barber recognized him from the memorial service, and the pastor used the opportunity to share the gospel.

The memorial also changed the life of 40-year-old Sirimas Amatayakul Kuipers, also known as Benz, who currently lives in Chicago. Benz attended Wattana Wittaya Academy, a Christian boarding school, where she remembered singing Christian songs and hearing about God, but did not put her faith in God.

When she was 28, she received a book about the testimonies of several Thai Christian celebrities and prayed to accept Jesus in her heart. However, afterward she didn’t tell anyone about her conversion—not even her Christian husband—and without any Christian friends or mentors, she didn’t grow in her faith.

When she heard about Tangmo’s death, she was surprised to hear Pradubchananurat preach at the memorial—he was the father of one of her classmates at Wattana. She watched all three days of the memorial service. 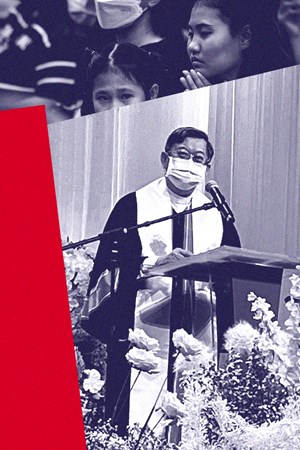 Reverend Thongchai preaching at the memorial.

“This was the first time that I listened to a Thai sermon and understood,” Benz said. “The messages went into my heart.”

She started listening to messages from Church of Joy, joined a church in Chicago, and reached out to Pradubchananurat about joining a cell group. The pastor encouraged her to start an online group with other overseas Thais. Today the group has grown to 11 members.

Duan in Penang is also part of the cell group. When her father heard of her conversion from Buddhism to Christianity, he worried that no one would make merit (or do good deeds to secure a better afterlife) for him and his wife after they died. Duan asked her Christian friends to pray for her father, and soon she began to see a change of heart. He bought a plane ticket to Penang to witness her baptism, despite his COVID-19 fears. On the day of the ceremony, he was moved to tears listening to the worship team practice.

“I used to be so self-centered,” Duan said. “Now my father has noticed the change and is glad to see me being more patient and joyful.”

Duan noted that she had previously followed Tangmo in the news and pitied her. But now she finds Tangmo’s interviews on her faith inspiring. “If I had not watched the memorial ceremony, I would have missed the opportunity to become Christian.”

Seree Lorgunpai is a current board member and former general secretary of the Thailand Bible Society.

1 of 2
Reverend Thongchai preaching at the memorial. Liberty Church