Seeing my family’s church consecrate a space of its own—years after a denominational split and legal fight—reminded me of God’s providence in where he places us.
Abri Nelson|September 12, 2019
Image: Craig Thoburn / TFCA

I held back tears as the bishop knocked on the doors of the new sanctuary of the Falls Church Anglican (TCFA) for the first time last Sunday.

“Lift up your heads, O you gates, and be lifted up, you everlasting doors, and the King of glory shall come in,” said The Rt. Rev. John Guernsey, quoting Psalm 24 (ESV). The congregation replied, “Who is the King of glory? It is the Lord, strong and mighty, even the Lord, mighty in battle. The Lord of hosts, he is the king of glory.”

The prominent Northern Virginia church, now part of the Anglican Church in North America (ACNA), had lost its 250-year-old historic church property after a long, high-profile legal dispute with the Episcopal Church that spanned 2006–2012.

Guernsey, bishop of the Diocese of the Mid-Atlantic, stepped through those doors into the church’s new building, a stripped, white, Gothic-style church, with light pouring through ceiling-high windows on either side.

By the time the service began—the first of two consecration services that would draw 2,000 people total—the sanctuary was packed to standing room only. Even folding chairs placed in the aisles had been filled.

Guernsey and recently installed rector Samuel Ferguson invited the congregation to participate in the blessing of the new space, with special prayers for the musical instruments, communion table, baptismal font, pulpit, and even the sound system. With every step, the congregation prayed responsively and sang in praise to God for bringing them home.

My family started attending TFCA in 2006, when I was in college, and my mom has worked for the church since 2011. I am now a member of a sister Anglican parish in the area, Church of the Ascension, and I’ve watched TFCA move from space to space over the past several years.

TFCA has worshiped in seven different locations and been hosted by Baptist, evangelical, Lutheran, Presbyterian, and Roman Catholic churches and schools, creating true ecumenical partnerships. Many ACNA parishes—including my congregation and about half of TFCA’s other church plant “daughter congregations”—have not settled in a church building of their own, matching a growing trend of churches sharing building space.

From the pulpit last Sunday, Ferguson spoke about trusting in God’s providence through the changing chapters of our lives as he recalled the church’s “tabernacling” period over the past seven years.

“We are God’s living stones whom he is shaping and configuring into his holy temple,” he said. “You can imagine it is one thing to build a beautiful building out of bricks and mortar. It is altogether another thing to build a unified and holy people. We are far harder to work with.”

While this is true, having a physical space for ministry does alleviate organizational pressure on the congregation and provides a central location for ministries to flourish. Having a building allows a congregation to be rooted, growing deep in the life of the surrounding community.

“To be candid, church buildings do matter. They serve as missionary outposts in the communities that church congregations seek to minister amongst,” wrote Jeffrey Walton, Anglican program director for the Institute on Religion and Democracy. “While the buildings themselves are not ‘the church,’ they establish a physical presence in a community. For Anglicans and other Christians in historic, liturgical traditions, setting is important.” 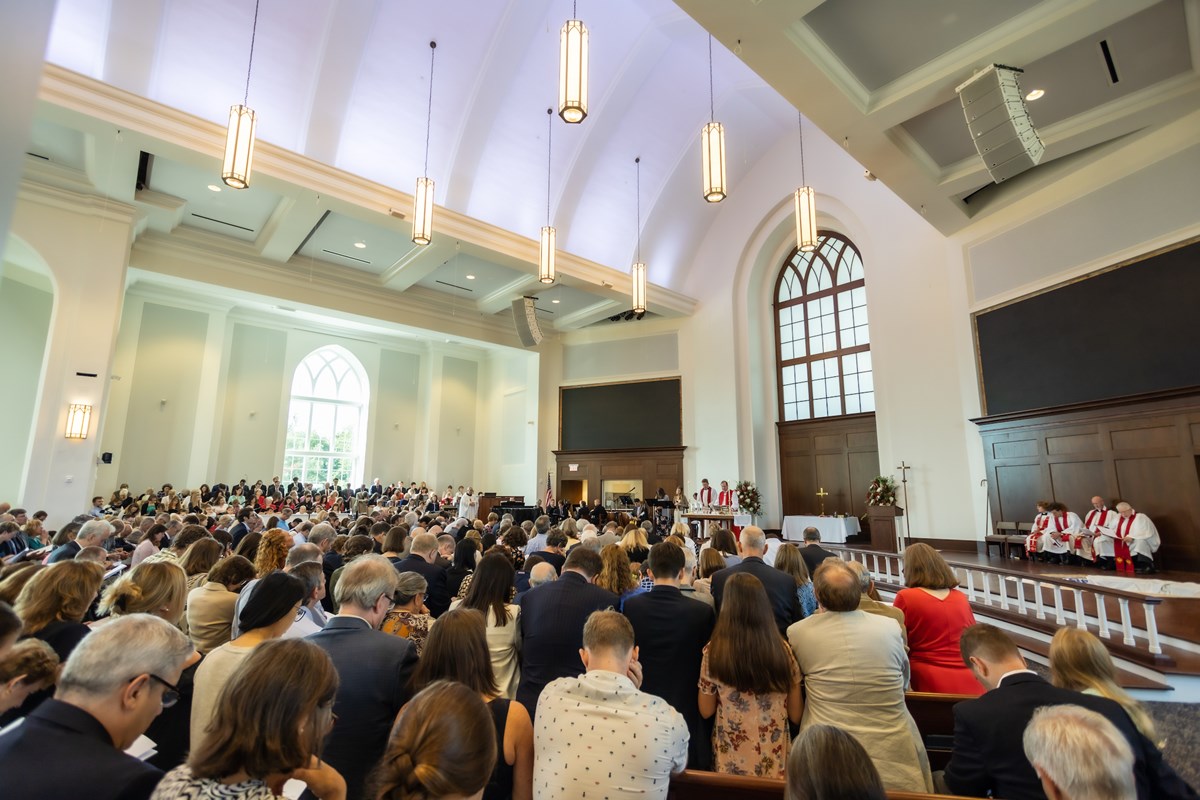 I felt this tangibly as I was able to kneel for the prayers of the people on something other than the floor for the first time in years; there was a communion rail at which to receive the bread and the wine. The space in which we inhabited was designed for our liturgical practice, and it felt like coming home.

The church is the people, but having a building is still important. For those of us who continue to search for space, there is something beautiful about the idea of settling down.

When TFCA moved out of their historic property in 2012, the church did not have a place to worship the following Sunday; the staff and congregation had to trust that God would provide, and he did.

But that week began a long, confusing search for a permanent home.

God is active even in our periods of uncertainty. Think of Joseph in prison, Abraham and Sarah without children, Elijah sitting on Mount Horeb after fleeing from Jezebel; they did not see the end of their stories while they were in them, nor could they see how God was orchestrating the strands of their stories to fold into his larger plan of redemption.

This is what I see when I think of TFCA’s journey to 6567 Arlington Boulevard. In contrast to the previous location in downtown Falls Church—the city that took its name from the historic church itself—the new building sits strategically on Route 50, a major commuter route into Washington, D.C. from the suburbs.

This new location is also ideal for the ministries God has called TFCA to; in particular, the English for Speakers of Other Languages (ESOL) classes and healing prayer ministries have been bolstered by this new home. The building is planted in one of the most diverse neighborhoods in Northern Virginia and the originally-purchased office space adjacent to the sanctuary allowed TFCA to build a suite of classrooms to house the ESOL ministry.

In a blog entry, former TFCA staff member Roxana Vaquero Blanco described community connections that developed between the church and local centers and schools before the sanctuary even had walls. Additionally, several medical practices share office space in the adjacent building, affording clergy frequent opportunities to pray for members of the community in the elevators.

Ferguson closed his sermon with a prayer that those who visit TFCA would see not just the beauty of the building, but the beauty of Christ in the lives of his people.

When we allow home to be flexible, we leave space for God to redefine what that means. Jeremiah 29 is often quoted to offer hope to those waiting for God’s direction, and verses 11-13 are ideal for this (“for know the plans I have for you…”), but when I think of TFCA, I think of verse 7: “Also, seek the peace and prosperity of the city to which I have carried you into exile.”

Its move is encouraging to me as a member of a still-itinerant parish. Regardless of where we are planted, may we remain faithful and open to God’s direction toward home.

Abri Nelson is a freelance writer and high school English and journalism teacher in Northern Virginia.

Speaking Out is Christianity Today’s guest opinion column and (unlike an editorial) does not necessarily represent the opinion of the magazine.