How Baptists and Catholics Together Helped Save Thousands of Florida Marriages

A faith-based marriage campaign in Jacksonville appears to have driven divorce rates down. Can the model be replicated?
W. Bradford Wilcox and Alysse ElHage |October 17, 2019
Image: Brooke Cagle / Unsplash

In 2017, something unprecedented took place in Jacksonville, Florida. The Jacksonville Baptist Association and local Catholic Diocese joined forces to co-sponsor a large marriage education and enrichment program for the Duval County area. What inspired local Catholics and evangelicals to come together was a privately funded community campaign to strengthen marriage. Over a three-year period, an organization called the Culture of Freedom Initiative (COFI) worked with about 50 Protestant and Catholic churches and over 40 local nonprofits to reach roughly 50,000 adults in Jacksonville.

Tommy and Sondra Davis are one of the Jacksonville couples whose floundering marriage was saved as a result of the campaign. Tommy says he was “99 percent out of his marriage” when a counselor with Live the Life, COFI’s main nonprofit partner, convinced him and his wife to attend an intensive marriage enrichment event called Hope Weekend.

“That Hope Weekend didn’t just save our marriage,” Sondra says. “It changed our lives.”

Indeed, according to a new report conducted by the Institute for Family Studies (IFS) and sponsored by the Philanthropy Roundtable, the marriage campaign may have had a similar impact on the marriages of thousands of Jacksonville residents. From 2016 to 2018, as the campaign was underway, the divorce rate in Duval County fell by more than 20 percent, a significantly bigger divorce decline than the one witnessed across the United States as a whole.

Did the Culture of Freedom Initiative’s marriage campaign help drive down Jacksonville’s divorce rates? To answer that question, IFS conducted a series of statistical tests comparing Duval County’s divorce rate (since Jacksonville comprises most of the county) to the national divorce rate during the same time period. They also compared Duval’s rate to other similar counties across Florida and the US, including cities with large military bases like Jacksonville’s.

Three findings from the IFS report stand out:

First, Duval’s rate fell 27 percent between 2015 and 2017, significantly more than the divorce rate decline in the United States during that same time period (which was 6 percent) and double that of the 10 percent decline in Florida. 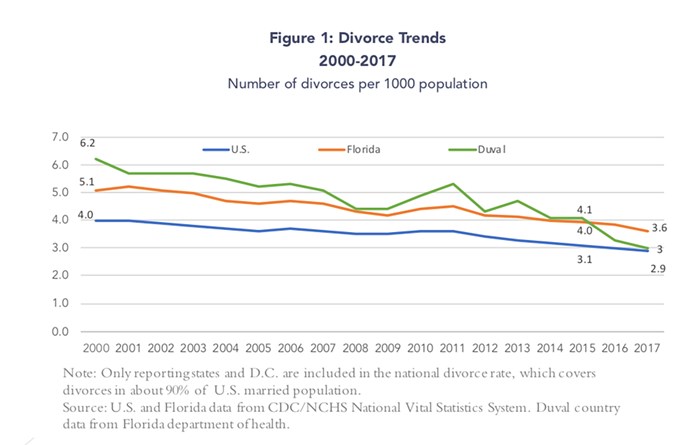 Second, Duval County’s divorce rate decline was also larger than the decline in similar counties in Florida with over 800,000 residents, as shown in the figure below. 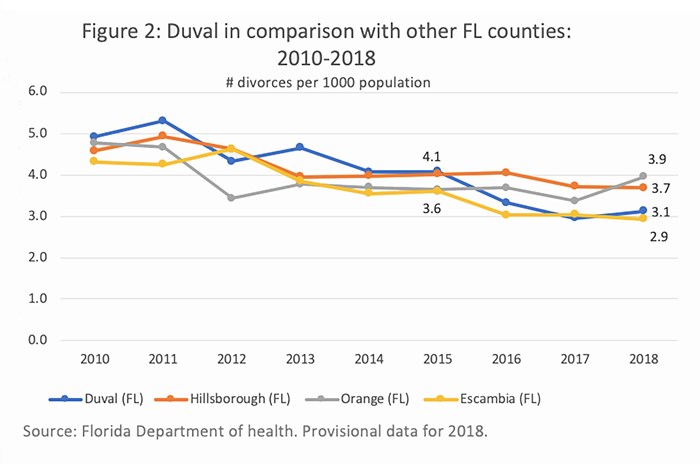 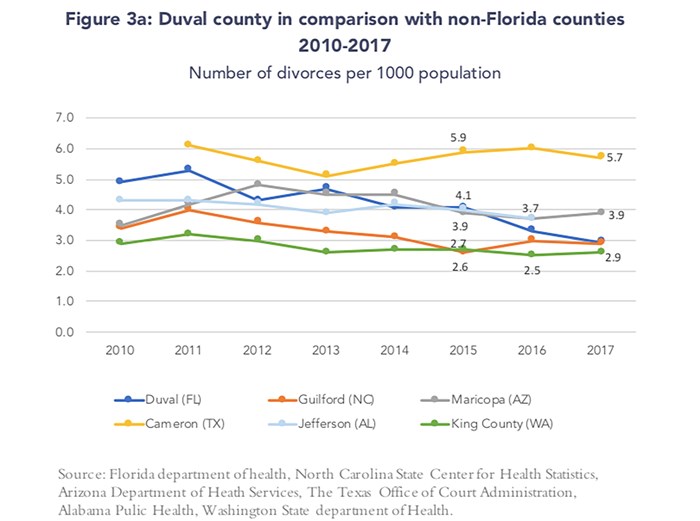 Although the IFS report is careful to note that scholars cannot definitively conclude that the marriage campaign caused the divorce decline in Jacksonville, the report’s authors were struck by the fact that “the increase in family stability in Jacksonville during the years of the Culture of Freedom Initiative was larger than the increase in family stability witnessed in the vast majority of other large, comparable counties across the United States.”

So what happened in Jacksonville?

Between 2016 and 2018, the marriage campaign served more than 11,000 adults in the area per year. If indeed the Culture of Freedom Initiative was a key driver in the divorce decline, the IFS report credits a “combination of microtargeted digital marketing with a broad network of religious congregations committed to strengthening marriage” as key potential factors in fostering marital stability.

According to JP De Gance, who directed the marriage campaign, one of the main factors behind the success in Jacksonville was the use of digital messaging. During the three-year campaign, COFI and its partners sponsored over 28 million digital ads that communicated the “marriage matters” message and also pointed to its services and programs. The ads included billboards, secular and religious radio spots, and a dedicated website for the campaign.

“We wanted to ‘normalize’ the idea that people should invest in their marriage at any and every stage of their relationship,” Dennis Stoica, chairman of Live the Life, explains in the IFS report. “So, we continually told couples that it’s never too early and never too late to take part in a marriage enrichment program.”

While messaging was certainly key, the success of the Jacksonville marriage campaign ultimately depended on the involvement of the local religious community, something Stoica and De Gance successfully harnessed.

Stoica formerly directed the publicly-funded California Marriage Initiative, where he watched faith-based groups involved in marriage strengthening programs essentially be “neutered” of their spiritual foundation due to church-state concerns. His hope was that through the privately-funded COFI campaign, Jacksonville churches would be free from government strings to do what he believes religious communities are “uniquely positioned” to do when it comes to supporting healthy marriages: provide couples with a beautiful vision about what marriage can and should be; support couples through programs and relationships; and teach and encourage healthy marriage skills.

According to De Gance, that is exactly what happened in Jacksonville. “Churches were the heroes of Jacksonville,” he says, adding that “the two biggest players in the religious marketplace in Duval County were the Southern Baptist Convention and the Catholic Diocese.”

While Live the Life worked with COFI to sponsor 45 percent of the campaign’s marriage enrichment activities, the other events were sponsored by area churches and other local nonprofits. In fact, 4 in 5 of marriage program participants were connected in some way to an area church while 1 in 10 were invited by a church member. The remainder had no prior connection to a church or its members but typically heard about one of the programs through the campaign’s advertisements, including the website.

According to the IFS report,

The leaders of the Jacksonville initiative … had the wisdom to understand that the power of local religious communities lies in the vertical and horizontal relationships that are built around them. It is in and through these relationships that lives—and marriages—are transformed.

Lives and marriages are continuing to be transformed in Jacksonville, thanks to the ongoing efforts of churches and nonprofit groups like Live the Life. In 2019, married couple Miguel and Caytlyn sought help from Life the Life, Jacksonville after hearing on the radio about one of the nonprofit’s marriage coaching programs. They later attended the organization’s intensive “Adventures in Marriage” weekend.

The program had a transformative impact on their marriage, giving them fresh hope for the future.

“Now, when things get tense or complicated, one of us says the words ‘I would like to do take a DTR [daily temperature reading], how about you?’” says Miguel. “And no matter the tension or the frustrations we might be having, we are always relieved to have that moment to express our appreciations to each other, followed by sharing, apologies, prayer requests, and our hopes for the future. And always holding hands!”

In addition to the continuing work in Jacksonville, a new group called Communio, which is headed by DeGance, is taking the Jacksonville model and pioneering new marriage initiatives in states like Montana and Texas. If they are able to replicate the Jacksonville model in these new locations, they just might empower more churches and nonprofits to strengthen marriage in Big Sky Country, the Lone Star State, and far beyond.

How Baptists and Catholics Together Helped Save Thousands of Florida Marriages

How Baptists and Catholics Together Helped Save ...