With major gatherings and promises of continued religious freedom protections, evangelists are eager to see the gospel keep spreading in the Buddhist nation.
Bob Craft|December 10, 2019
Image: Office of the Council of Ministers / Government of Cambodia

Last weekend the Billy Graham Evangelistic Association held its first rally in Cambodia, with Franklin Graham preaching before thousands in Phnom Penh. Organizers called it a “historic event” and the “perfect time” for the global organization to encourage the faithful minority trying to reach their country for Christ.

Momentum around the spread of the gospel in Cambodia has been mounting for years, with another significant gathering taking place a couple months before.

In October, the government of Cambodia held its largest-ever meeting with Christian leaders, with Prime Minister Hun Sen addressing over 3,000 leaders representing more than 7,000 local churches. It was only the third time in the history of the predominantly Buddhist nation that this official gathering with the head of government had taken place.

Amid heavy security, smiles, and countless selfies, the prime minister entered Koh Pich Convention Center in Phnom Penh. He addressed the Christians gathered and thanked them for their involvement in education, ethics, and social projects. He praised the church’s role in contributing to the peace and stability of the nation through promoting human dignity and unity.

Among the many leaders in the audience were the leaders of the two largest groups of evangelical churches in Cambodia: General Secretary Heng Cheng of the Evangelical Fellowship of Cambodia (EFC) and Pastor Uong Vibol of the National Christian Churches Network, Cambodia Council (NCCN-CC). The chairman of the board of NCCN-CC, Pastor Uong Rein, was appointed to help organize the church leaders and offer prayer for the prime minister and the Kingdom of Cambodia at the event.

Praise from the Prime Minister 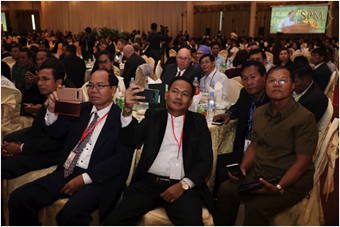 The gathering has grown since 2010, when 400 Christian leaders first met with officials from the ministry of religion. At that first event, officials were presented with the Creation story using Cambodian music, dance, and drama. I was there as a ministry partner from the US, and it brought tears to my eyes as I prayed for the Buddhist officials who were watching. They were clearly moved and pledged continued religious freedom for the church leaders who, even then, represented almost every province in Cambodia. In 2012, the Cambodian ministry of religion approved and attended the public celebration of Easter with worship organized by the NCCN-CC involving 18 different associations and denominations.

Nearly a decade later, the evangelical networks have continued their plan for church planting and evangelization across the country, and only in May of 2017 did the prime minister begin to address Christians in large gatherings like the one in October.

While elsewhere in the region, Christians face government restrictions, Cambodia’s church leaders have seen their work not only permitted but championed and celebrated from the highest levels of government.

This year, Hun Sen commented on the contribution that the Christian community had made in society to combat violence and addiction within Cambodia. And he specifically thanked Christians for participating in the peaceful, democratic elections that had helped keep the Cambodian People’s Party in leadership. (Hun Sen has been in office since 1985.)

The leaders of the national evangelical networks can celebrate the event as an answered prayer. The prime minister assured Christians that their religious freedoms would continue, meaning evangelicals can continue their coordination in a years-long plan to reach all of Cambodia—each and every village—with the gospel.

Looking back through all the struggles in the history of the gospel in Cambodia, this event is nothing less than a modern-day miracle. The year 2019 will prove a landmark year for Cambodia, with the growth of the church standing in stark contrast to the repression and trauma of its historic past.

Few countries in the world have a more glorious or gruesome history than Cambodia. The Cambodian people once ruled an empire that stretched over most of modern Thailand, Laos, and Cambodia, and into Vietnam. The center was near Siem Reap, where magnificent temple ruins of Angkor Wat, a UNESCO World Heritage Site, reflect Hindu, Buddhist, and Khmer imagery.

By the time the first Protestant missionaries arrived in 1923, Cambodia was part of French Indochina and had been reduced to its current boundaries, with an estimated population of 2.5 million. Christian and Missionary Alliance (C&MA) missionary Arthur Hammond began Bible translation into the Khmer language in 1925, with printed versions available about 30 years later. Christianity had long been characterized by most Cambodians as a “foreign religion” beginning during the period of the French Protectorate (1863–1954) As a consequence, there were only 700–1,000 Christians in Cambodia by 1970.

The political climate of Southeast Asia, and particularly in Cambodia, had not proven to be a fertile seedbed for the gospel. However, a change of government in 1970 under Prime Minister Lon Nol led to a period of religious freedom. Missionaries were again allowed into Cambodia, the number of Cambodian believers rose to as many as 10,000, with approximately 30 churches in Phnom Penh by 1975. Then suddenly, Lon Nol was overthrown by the infamous Pol Pot, Marxist leader of the Khmer Rouge revolution in April 1975.

Pol Pot declared “Year Zero,” in an attempt to reset the country politically, socially, and religiously. Missionaries were evacuated from Cambodia when the Khmer Rouge came to power. By the end of 1979, 80 percent of Cambodian believers had been martyred during the horrors of Pol Pot’s Killing Fields. Most Christians were among more than 1.3 million Cambodians whose bodies were scattered in more than 20,000 mass burial sites called “killing fields” throughout the country, in what many consider the worst genocide of the 20th century.

There may have been as few as 200 remnant believers who were meeting in secret among the ruins of Phnom Penh city. The Vietnamese military invaded and occupied Cambodia from 1979 to 1989 as they scoured the countryside looking for any remaining Khmer Rouge fighters. The church was suppressed and remained underground during the Vietnamese occupation. 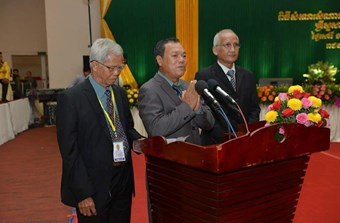 Image: Office of the Council of Ministers / Government of Cambodia

Pastor Im Chhrorn from the C&MA, currently 88 years old, survived the killing fields and kept the remnant believers encouraged. Vibol, now the NCCN-CC president, had also survived as a teen, escaping brutality and bullets of the Khmer Rouge by hiding in the jungle. Some years later he made his way into Phnom Penh, taking refuge in a Buddhist temple. He eventually came to Im with questions about a god named “Jesus,” whom he’d read about in a library book.

Pastor Vibol was caring for orphans in one of the poorest areas of Phnom Penh when I met him in 2002 and partnered with him soon after to provide Bibles and training for Christian workers and new believers. At that point, Vibol was already the head of a group of over 300 churches that made up the NCCN-CC. Soon, he saw even more church growth and new churches established as Cambodian trainers and Scripture flowed from Phnom Penh into the countryside villages.

During the past fiscal year, the NCCN-CC reported 58,313 new believers from the evangelistic efforts of their more than 3,000 established churches. Who would have imagined this kind of growth in a single year, considering the history of Cambodia?

The two major gatherings in Phnom Penh—Franklin Graham’s rally and the prime minister meeting—are noteworthy for gathering Christians and Christian leaders in a country where the faith remains a minority. But even more significant and effective gospel work is happening at a smaller scale throughout the year. A network of provincial leaders meets each month in Phnom Penh for fellowship, reporting, and resupplying of materials needed for evangelism and discipleship, with teams focused on going into unreached villages and establishing house churches.

Their approach is inspired by the principle of Matthew 13:31–32: “The kingdom of heaven is like a mustard seed, which a man took and planted in his field. Though it is the smallest of all your seeds, yet when it grows, it is the largest of garden plants and becomes a tree, so that the birds of the air come and perch in its branches.”

The prime minister’s pledge of continued religious freedom means that the door will remain open for their ministry—whether through mass events or seeds planted through small-scale neighborly outreach. We will continue to pray that God will work through his people at this opportune time and that the gospel will spread across Cambodia, including to 8,600 villages and communities that still do not have a church.

Bob Craft is the founder and president of Reach a Village. He has served in ministry throughout Southeast Asia for nearly 30 years and has worked in Cambodia with the NCCN-CC since 2002, helping train local pastors and Christian workers in church growth and church planting.