Average Rating
(not rated yet)ADD YOURS

Hollywood loves a remake. Perhaps that's why Peter Jackson will helm a third version of King Kong, coming in December—not that I won't be camping out in line with everyone else. Or, maybe that explains why several of the summer's most-anticipated films are remakes, adaptations, or sequels: War of the Worlds, Charlie and the Chocolate Factory, Batman Begins, and Fantastic Four (just to name a few).

Nelly and Adam Sandler as Earl and Paul, respectively

Though remakes aren't always successful—and some claim that remakes and sequels are never as good as the originals—I enjoyed The Longest Yard, Hollywood's latest foray into remake-world. The Longest Yard, starring Adam Sandler and directed by Peter Segal (who also helmed Sandler's Anger Management and Fifty First Dates), is more of an homage to the original film of the same name, which starred Burt Reynolds as the feisty quarterback. The updated version is nearly a play-by-play of the original, touting several similarities including "action" sequences (e.g. an opening car chase), characters (major and minor), and spots of dialogue along the way.

In the opening scenes of the movie, things aren't going well for ex-NFL quarterback Paul "Wrecking" Crewe (Sandler). He's living with and off his girlfriend, Lena (Courtney Cox Arquette), a woman scorned who tells Crewe that he should forget about football, "because football's forgotten about you." On that note, Crewe (full of anger and under the influence) takes Lena's Bentley and promptly causes a multiple car pile-up, earning himself a 3-to-5 year stay at Allenville Federal Penitentiary (the trailer calls it West Texas Federal Prison, so pick your poison).

Burt Reynolds, who starred in the 1974 original, comes back for the remake

When Crewe arrives at the prison, he's greeted with Captain Knauer's police baton, which quickly fells Crewe. After the meet-n-greet, Knauer (William Fichtner) ushers Crewe into Warden Hazen's office, but not before telling Crewe to reject any offers from Hazen concerning the Allenville guards' football team. Hazen (played superbly by the "villainous" James Cromwell, who invokes the essence of his dastardly Captain Dudley Smith from L.A. Confidential) gives Crewe a spiel about Allenville football. Bottom line? Crewe's sentence time depends on his cooperation in helping the guards to win a championship.

Crewe decides that life in the Pen will be better if he cooperates with the Warden. As Crewe observes the football team, he and the Warden decide that the guards should have a "tune-up" game, or a game in which the guards play a team so weak that the guards effectively crush the opponent and, thus, feel better about themselves going into the Big Game. 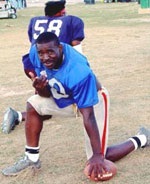 The Cons aren't a team right off the bat. Rather, Crewe and Caretaker (funnyman Chris Rock) spend a portion of the film recruiting and training the socially unsophisticated men of Allenville Pen. These criminals are tough and, much like "Old Man" Scarborough (Burt Reynolds), they've been "waiting for a chance to get back at those sadistic guards." With this tune-up game, the convicts and the guards will go toe-to-toe in an effort to see who really runs the Big House.

The original Yard showcases a fit Reynolds in a somewhat comedic role. But, overall the movie exudes sadness. It may be that the 1974 version paints a grittier picture of prison than does this remake.

The goofy Sandler has a way of taking the grit out of a picture; his fun-loving side usually shines through (inadvertently or otherwise). This edition of Yard has a lighter feel than the original—well, considering it's a movie about prison inmates. And Sandler's characters often rally around the little guy, the ugly guy, or the outcasts in general. It seems only natural that his characters' compassion is an endearing aspect of each of his movies.

Along with Sandler, it seems that the casting director had fun doling out the movie's roles—including several to professional wrestlers such as "Stone Cold" Steve Austin, Kevin Nash, Bob Sapp, Bill Goldberg, and 7-foot-2, 400-pound behemoth Dalip Singh (sort of a modern-day version of The Princess Bride's Andre the Giant). Other gigs went to former NFL star Michael Irvin and rapper Nelly. Perhaps the best casting surprise came from Cloris Leachman, who plays Warden Hazen's secretary, Lynette Reynolds (Bernadette Peters played the original). If you recall, Leachman teamed up with Sandler in the 2004 dramedy, Spanglish. With Leachman's presence, we see yet another trend of Sandler's: his love for working with good friends and associates.

While entertaining, The Longest Yard is not without its red flags. There's just no getting around the fact that this is a "prison movie," and it's thus rough around the edges. Yard is full of bad language and many characters use racial slurs throughout the movie. Still, the film makes light of the prison scene, and it's worth remembering that there are real inmates whose lives are not the equivalent of their on-screen counterparts. Prison is not funny, so audience members need to suspend disbelief.

For parents to consider

What Other Critics Are Saying

Director Peter Segal (Anger Management, 50 First Dates) is working with Adam Sandler again, this time with Chris Rock joining the team in The Longest Yard, a remake of Robert Aldrich's 1974 film about prison inmates who challenge their guards to a football match.

"I enjoyed The Longest Yard, Hollywood's latest forays into remake-world," says Mary Lasse (Christianity Today Movies). She concludes, "While entertaining, The Longest Yard is not without its red flags. There's just no getting around the fact that this is a 'prison movie,' and it's thus rough around the edges."

Other Christian press critics said it's more than just "rough around the edges."

"With some 150 obscenities, countless sexual references (mostly homosexual) and two pornographic videos (one heterosexual, one homosexual) thrown in, it's obviously a sex comedy—and mostly a gay sex comedy," says Annabelle Robertson (Crosswalk). She calls it "the most foul, violent and perverted PG-13 film I have ever seen in my life."

"Trite, profane, lewd and highly inaccurate"—those are words used by Kathy Bower (Christian Spotlight), who is definitely not a Sandler fan. "Sandler is a star because he can make silly voices, noises, and get away with making crude, cruel, and meaningless sarcastic observations in such a way that his fans believe he is delivering humor."

Tom Neven (Plugged In) is dismayed by the movie's clichés, the "abjectly bad filmmaking," and content that includes "excessive violence, sexual perversity and the torrent of foul language that effectively bury this stinker."

Michael Elliott (Movie Parables) calls it "a lackluster sports comedy that is but a poor imitation of a far superior film." He says the script "offers no tension, few laughs, and an obscene abundance of product placements."

David DiCerto (Catholic News Service) says, "While sympathies will obviously lie with the underdog inmates, viewers may find it difficult rooting for hardened convicts who, for the most part, are motivated by long-simmering rage—though understandably so—against their vicious and racist keepers." He concludes, "The new movie captures the spirit of the original … but unfortunately it also ratchets up the brutality and vulgar humor."

Mainstream critics are throwing penalty flags all over the field.

Average Rating
(not rated yet)ADD YOURS

1 of 4
Nelly and Adam Sandler as Earl and Paul, respectivelyBurt Reynolds, who starred in the 1974 original, comes back for the remakeFormer NFL star Michael Irvin plays a partBob Sapp, Dalip Singh, Adam Sandler and Chris Rock