The history of Christian relationships with the Jews has both its bright spots and its dark corners.
David Neff 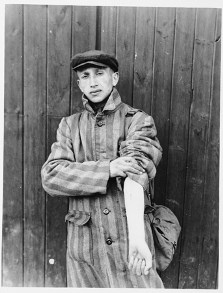 Today was Holocaust Remembrance Day (or Yom HaShoah in colloquial Hebrew). On this day, Jews do not have a uniform ritual for memorializing those who died as part of the Nazi genocide. The observance was established too recently (inaugurated only in 1951), for any genuine tradition to have developed. Jews marked the occasion in different ways today. I have even less sense of what I should do, but I decided this morning to wear my kippeh (yarmulke) to work as a sign of solidarity with my Jewish brothers and sisters. It gave me a number of opportunities to remind my Christian coworkers of today's significance.

The key issue Christians face is trying to grasp the degree of Christian responsibility for the Nazi genocide. Clearly, many German Christians were utterly complicit, but certainly not all. Clearly, there are cultural links between this history of Christian anti-Semitism and Nazi anti-Semitism. But there is more to the story than that.

Here are three things to remember and to help us have a balanced, accurate view of Christians' relationship to this great horror.

Second, Christian anti-Semitism was historically different in several key ways from Nazi anti-Semitism. One of those ways is the distinction between placing an accent on race (as the Nazis did) or on religious identity (as the medieval church did). Even in the church's teaching of contempt, the focus was on the spiritual blindness of Jews who refused to recognize what God was doing in Jesus of Nazareth. Baptism and conversion (and thus a changed religious identity) were always open doors for Jews who wished to escape prejudice and oppression. For a more detailed list of such contrasts, see my 1998 National Review essay about the Washington, DC, Holocaust Memorial Museum's handling of the topic. Also, my 1998 Christianity Today editorial, "Did Christianity Cause the Holocaust."

Third, without Christian activism, there would not be a Jewish homeland today. More to come on that in a few weeks when Christian History will publish the story of British Christians who wanted to show their love for the Jewish people in marked distinction from the history of medieval Christianity and its teaching contempt for the Jews. (These British Christians saw their efforts on behalf of the Jews as part of their Protestant departure from historic Catholicism.) They were responsible for the British government's 1917 Balfour Declaration, which laid the foreign policy and legal groundwork for the eventual establishment of a Jewish homeland in Palestine. In that forthcoming article, Donald Lewis of Regent College reports: "Seven of the ten members of the war cabinet that issued the declaration were from evangelical homes; six of the seven were from Calvinist backgrounds, including Balfour (the foreign minister) and Prime Minister David Lloyd George."

So on Holocaust Remembrance Day, please recall that the history of Christian relationships with Jews has both its bright spots and its dark corners. We bear the shame of our fellow Christians whose long teaching of contempt toward the Jews and whose complicity with Nazi policies led to the deaths of millions. But we also claim as our own the righteous Gentiles who stood up to the horror and the Christians who laid the foundations for a Jewish homeland. Today, we honor them.