'No Ordinary Family' has an extraordinary premise: love.
Mark Moring|October 1, 2010
Our Rating
not rated
Average Rating
(2 user ratings)ADD YOURS

One of the more anticipated new shows this fall is No Ordinary Family, premiering tonight on ABC (Tuesdays, 8/7c). It's a lighthearted drama that lives up to its title not only because of the obvious—Mom, Dad, and two teenage kids have superpowers—but because of a trait much rarer, at least on primetime network television: genuine familial love. They really do care for each other.

Sure, they have issues, squabbles, and some of the snark expected from a TV family, especially with two teens and good writers (including Darren Swimmer and Todd Slavkin of Smallville) who appreciate snappy dialogue. But judging from the pilot and from buzz we have heard, the Powells try hard to connect with each other in a fast-paced world pushing and pulling from all sides. 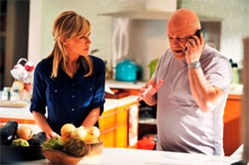 In the pilot, Jim (Michael Chiklis of The Shield and The Fantastic Four) laments the loss of family closeness as wife Stephanie (Julie Benz) and children—daughter Daphne and son J. J.—get more absorbed in their own worlds: Stephanie, with her 80-hour work weeks, Daphne, with her social circles, and J. J., with his academic struggles. "My marriage, my kids, my life were slowly slipping away from me," Jim says in a voiceover. In an effort to bring them together, he plans a vacation to Brazil. Their plane crashes in the Amazon River, but the family survives—and it's not long before they realize that each has acquired a superpower. Must have been something in the water.

In a wink-wink understatement, Jim says the crash—and resulting abilities—sparked "a new beginning" for the Powells. Tellingly, each family member's superpower represents just what they needed, the opposite of their weakness. Jim felt impotent to do anything about his family; he gains strength and agility, and finds new purpose in life. Stephanie's busy career left her wishing she could be in two places at once; she acquires super-speed that lets her move from place to place in the blink of an eye. Daphne had trouble reading her friends' (and her boyfriend's) motives; she gets telepathy. J. J. had trouble reading, period, with an apparent learning disability; he ends up able to solve complex problems in a single bound. Scripture says that strength is perfected in weakness. In No Ordinary Family, that's extraordinarily so.

Meanwhile, Daphne's ESP lets her learn that her boyfriend is sleeping with another girl, after promising Daphne—who apparently wants to save sex for marriage—that he loved her and that he'd wait. This gives Daphne the best line of the pilot: "It's not fair! I can't be a virgin and a freak!" (Mom hugs her knowingly.) 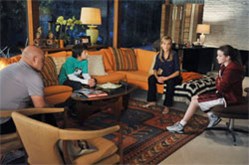 This family has its arguments, but love conquers all

Daphne has another great line, though much more serious, when she yells at her parents after an argument, "This family isn't broken, you two are!" After she storms off, Stephanie says to Jim, "She's right, isn't she?" He agrees. They decide that their marriage needs some serious work, and they get right to it.

No Ordinary Family is in many ways like one of my favorite movies, The Incredibles, Pixar's 2004 film that depicts a family of superheroes with faults and foibles but who clearly love one another through it all. That premise is hardly new (The Fantastic Four, X-Men, and the 2005 film Sky High), and loving TV families (The Cosby Show, Home Improvement, Leave It to Beaver, Father Knows Best) have been around as long as the medium. But when written, directed, and acted well—and this show has all three in spades—and mined for rich topical potential, such programs can indeed reach beyond the ordinary.

Our Rating
not rated
Average Rating
(2 user ratings)ADD YOURS

1 of 2
Julie Benz as Stephanie, Michael Chiklis as JimThis family has its arguments, but love conquers all