Imagine a conversation between a child and her father:

“Well, Rosie,” says Dad, “I’m going on a trip. Would you like me to bring you something?”

“I would like a star, Daddy,” Rosie answers. “One like that.” She points to Betelgeuse, the red giant in the constellation Orion.

“There are a few problems with that, Rosie. First, there is the question of how long it might take me to get there and back. Even with a ship that could travel at light speed and was big enough to carry a star, it would take me 642 years to get there.”

“Well, no. The speed of light is a constant, and anything that actually reaches light speed converts into energy—into light itself. But if I got to near light speed, I might be able to survive the entire journey because of relativity. Time would slow down for me, but people on earth would still die before I got back . . .”

As good as this father’s intentions are, a better response might be something like, “It may be too big, but I’ll see what I can do.”

This example came to mind as I was preparing a lecture in which I was trying to answer the question, “How do we incorporate the findings of science into our readings of the Bible? How do we read as scientists, or at least scientifically minded people?”

Consider Luke 11:34–36. Jesus had just performed an exorcism, yet some around him are asking for a sign. The crowds are growing in size. Jesus tells those around him that the only sign they will receive is the sign of Jonah. Then he says something particularly puzzling:

Many folks read this passage and walk away confused. What do eyes and lamps and inner light have to do with anything? Jesus doesn’t seem to make sense here.

If we do some digging, though, we find out that the ancient world had two competing theories for how the eyeball functioned in human physiology. One theory, advocated by Plato and the ancient physician Galen, suggested that the eye functioned as a sort of projector. It casts light onto the physical world, illuminating it in much the same way sonar works by projecting and receiving sound waves. Thus a bad lamp inside the body meant the projector didn’t work properly and one could not see.

The other theory of how the eye functioned was advocated by Plato’s student Aristotle. He suggested that the eye was a receiver and processor of externally generated light. Though the minority view, Aristotle’s was eventually vindicated by modern science.

Here, Jesus is saying that unrighteousness and evil—our sin nature—corrupt us until we cannot see the evident signs of God’s Messiah performed before our very face. We can ask for a miraculous sign all we want, but if our eyes are bad—if our projector lamp is evil and dark—everything we see and subsequently do will be evil and dark. We will neither see nor follow God when he shows up in our lives.

Here’s the problem: it appears that Jesus, God-made-flesh, taught using a mistaken understanding of physiology. This passage from Luke makes perfect sense if we assume Plato and Galen’s ideas, but what does this say about biblical authority and revelation? We now know how eyes operate, and there is no dispute about it. Did Jesus get it wrong?

Or did Jesus meet his listeners where they were?

This is brings us back to the dad tasked with delivering Betelgeuse. Correcting his child’s understanding of the science of the universe is not the important thing; conveying love to her is. Jesus, as the omniscient God-man, could have spent years and years correcting our understandings, explaining to us heliocentricity and relativity and biological physics. But he didn’t, because that was not the crucial task at hand. There were bigger things at stake than getting our physiology right.

Jesus met humanity where we were in cognitive development and scientific understanding. Just as he condescended to become a baby born in an animal feeding trough among the poorest of the poor, God humbled himself to use naïve and (what moderns would call) un-scientific theories of the world to convey his love to us. He did not validate those understandings, but he worked through them and in spite of them for our sake. God met us where we were, even if it meant humbling his glory, his majesty, his transcendence, his intellect.

The God who wrote the codes of gravity, formed the voids of space, and dictated the functions of biology put aside the intimate understanding of creation—the knowledge that only the Creator himself had—to make the revelations now mediated in Scripture. From the Higgs boson to galaxy clusters, God knows and knew all that can be known. And yet he would debase himself with frail and primitive understandings of the world in order to convey his love to us.

We ask for Betelgeuse, and our Father in heaven hears us, wants the best for us, and is willing to bend down and reveal part of his amazing plan for the cosmos and humanity. Instead of scoffing at the “antiquated” science that God speaks through, I am humbled at what he was willing to do for the sake of those he loves—and yet still encouraged to delve ever deeper into the world he created and the word he spoke.

Reed Metcalf is media relations and communications specialist at Fuller Theological Seminary. He is the editor of the Fuller Blog on Patheos and co-founder of the Fuller Faith and Science Student Group. 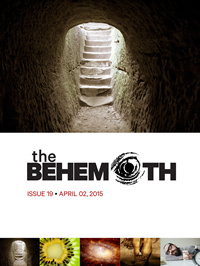