Are You Living Your Calling?
BCLStore.com

When we are genuinely curious about people, we will have a different relationship with them.
Church Central

Curiosity is a key quality for church leaders. It doesn't appear on too many top ten leadership lists, but being curious is a valuable skill that can change the way we relate to our followers.

We had a neighbor who lived to be 99. Helena had lived almost her whole life next door to the parsonage of the First Baptist Church of Gardner, Massachusetts, where I served as pastor for 13 years. Helena was endlessly curious about the world, always wanting to learn something new, genuinely interested in people. Even when she fell and broke a hip at the age of 86, she took on the experience of rehabilitation as yet another opportunity to learn. And a second broken hip a decade later was a challenge to see how she could manage to stay in her own home, which she did almost until she died, still attending church as often as she was could.

As the New England autumn leaves took on color, she exclaimed every year, "Isn't the foliage wonderful this year!" Others would complain the leaves weren't quite ...

Popular Theology
Why Are There So Many Angry Theologians?
Theology should produce the fruit of the Spirit, not the works of the flesh.
Ronni Kurtz
Editor's Pick 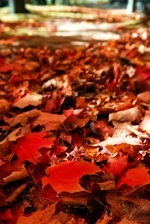