Americans can now independently resettle those fleeing war and persecution. Christian resettlement agencies are largely on board.
Emily Belz|January 20, 2023 12:30 PM 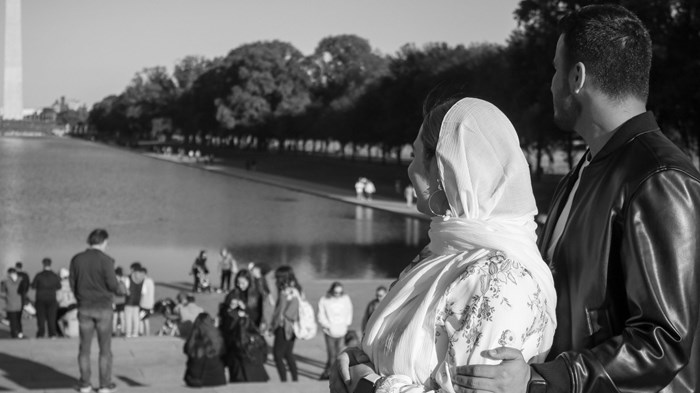 Image: Paul Kiekhaefer
An individual sponsor of an Afghan refugee couple did a maternity shoot for them in Washington, DC, last year.

Last year, Mark and Jackie Sawyer cosigned a lease for a couple they’d known for a short time—because the couple had recently arrived from a refugee camp overseas.

The Sawyers didn’t realize the headaches and the friendship that would come with joining a group of friends from their Washington, DC, church to sponsor the resettlement of Afghan refugees. They ended up raising $30,000 for the couple, who were expecting their first baby, and staying in relationship with them beyond the initial three-month resettlement period.

This week the pilot program the Sawyers took part in has officially launched through the US State Department, allowing individuals—rather than resettlement agencies alone—to commit to sponsor a refugee for resettlement.

Through Welcome Corps, groups of at least five Americans can apply to sponsor a refugee together and commit to raising at least $2,275 per refugee. For 90 days they would help refugees transition by securing housing, finding jobs, and enrolling children in school.

“You don’t have to have it all figured out,” said Sawyer. “It’s certainly not easy, but it’s probably more doable than you think.”

Refugee resettlement typically goes through nine nonprofit resettlement agencies. These groups, mostly faith-based organizations such as the evangelical agency World Relief, contract with the government to assist and support refugees through their first months in the United States—then often extend the help longer term through the groups’ own funding.

The agencies have been hit by the steep decline in refugee admittances to the US over the past several years, but they have decades of experience in this work and are preparing to be resources for individual Americans stepping into it through the new program.

“I think it’s a great idea, a great opportunity for the general public to get engaged,” World Relief’s senior vice president of advocacy and policy Jenny Yang told CT about the new program. “It does expand community support for the refugees in general, especially where there is not a refugee resettlement agency in a community.”

World Relief, the humanitarian arm of the National Association of Evangelicals, has an office in Illinois, but there is no resettlement agency in the lower two-thirds of the state. This program would allow a vetted sponsor—like a group at church—to help a refugee resettle in areas where agencies don’t have staff or offices.

The Welcome Corps program is for refugees who are already in the pipeline to come to the US, although the State Department plans to eventually allow individual sponsors to advocate for a particular refugee overseas to receive admission to the US.

The advocacy for a particular refugee is a feature of the successful Canadian program that this new initiative is based on. Canadian churches have worked to reunite refugee families split across the oceans by committing to sponsor those stuck in refugee processing.

The US government hopes through this new program to find an additional 10,000 sponsors for 5,000 refugees. Refugee admissions have been well below the Biden administration’s goals: The US admitted fewer than 26,000 refugees in fiscal year 2022 when there were 125,000 spots available.

The refugee number doesn’t include thousands of Ukrainians and Afghans admitted through humanitarian parole, a separate immigration category.

The low admission numbers aren’t because of a lack of volunteers to resettle refugees but because the government’s refugee admission infrastructure is recovering from deep cuts under the Trump administration and other bureaucratic bottlenecks.

“It is worth stressing that the ability to resettle refugees domestically has not been the fundamental challenge of the last two years,” said Krish O’Mara Vignarajah, the head of Lutheran Immigration and Refugee Service (LIRS), a resettlement agency, in a statement supporting the new program. “The Biden administration must prioritize the streamlining of refugee admissions, which remain regrettably low this fiscal year.”

World Relief, Send Relief (the humanitarian arm of the Southern Baptist Convention), and Samaritan’s Purse already had programs where volunteers would commit to supporting a particular refugee family for several months—but that was in conjunction with their organizations’ work. Thousands of churchgoers stepped up through those programs in the first months after the Afghanistan withdrawal.

Last year the Sawyers and six others from their DC church began praying about participating in the pilot version of the program, sponsor circles. They wanted to make sure they could commit not only to the 90 days but also to remaining a part of the refugees’ lives afterward. They agreed to go for it.

Once approved, they had a training call with an umbrella organization—not one of the resettlement agencies but a local nonprofit with knowledge about community resources. They could contact the local organization with questions, but otherwise the Sawyers’ group sought out their own resources.

Their eight-person sponsor circle had assets: One person in the group had previously volunteered with refugees through World Relief. Another was a former social worker.

Last summer they were matched with the Afghan refugee couple expecting a child. A lot has gone well: The couple recently had their baby, and a photographer in their group did a maternity shoot. The mom has started attending a software coding boot camp with the goal of working from home. The father has a job in accounting, which he got through a job placement agency where Sawyer was volunteering before. They had worked together on the man’s résumé and did a mock interview.

But the sponsors needed the umbrella organization for certain things, like figuring out how to manage the finances for the couple’s housing. “Housing was a nightmare,” Sawyer said. Landlords would back out when they found out that the mom was pregnant or that the family were refugees. That’s how the Sawyers ended up cosigning a lease with the couple.

Sawyer says usually someone from their circle sees the couple every week. “I count them as friends,” said Sawyer. “We weren’t sure if they would want to become friends or how involved they wanted to be after the 90-day commitment was up. But they have stayed in touch.”

Evangelical support for refugees has increased dramatically since the Afghanistan withdrawal and Russian war in Ukraine, events that brought tens of thousands of Afghans and Ukrainians to the US.

Christian resettlement agencies were largely supportive of the Welcome Corps program, even if agencies might be swamped with requests for help or support from individual sponsors.

Church World Service, one of the nonprofit agencies, said the program was “an important evolution to expand refugee resettlement.” Vignarajah, the head of LIRS, called the program “forward-thinking” but added that the government should ensure “sponsors are sufficiently equipped with the necessary resources and know-how to ensure the best possible outcomes for refugee families in their care.”

For the Sawyers, a more fundamental issue is that the couple they are helping is in legal limbo. They are in the US under humanitarian parole, Sawyer said. Congress has so far declined to establish a more permanent solution for those Afghans.

“From a faith-based perspective, this is one of the ways we can fulfill the Christian call to love and welcome the strangers,” Sawyer said about being a sponsor. “And as an American—the US has been involved in Afghanistan the entirety of my adult life. … I cared about these issues a lot. This is the least we could do to help our allies in a place where we have been involved.”