New research shows a marked shift in attitudes about refugees and immigration reform compared to 2015, and experts have a few ideas why.
Emily Belz|September 27, 2022 11:00 AM 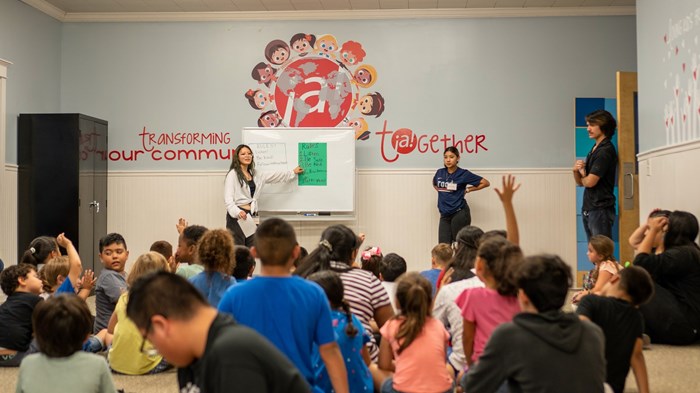 Carla Flores was nervous to stand in front of a suburban evangelical congregation and share her experience as the child of undocumented immigrants.

Born in Mexico and raised since she was a toddler in Kansas City, Kansas, the 26-year-old children’s ministry leader is one of over 3 million “Dreamers” in the US, meaning her status is legal but uncertain. During her recent presentation at this church on the other side of town from her own, some churchgoers drilled her for details about her life, while others responded warmly and volunteered for ministry in her immigrant community.

Flores’s experience reflects a bigger shift in US evangelical views on immigration.

Some polls in the past have shown white evangelicals in particular were opposed to pathways to citizenship and accepting refugees. But the latest survey from Lifeway Research—coming as an unprecedented wave of Afghan refugees settle in the US and Dreamers remain in limbo—indicates that evangelicals’ support for immigrants and immigration reform has grown significantly.

Evangelicals are more open to welcoming refugees and offering paths to citizenship for undocumented immigrants than they were in 2015, the last time Lifeway polled on the issue. Now 77 percent of self-identified evangelicals are “strongly” or “somewhat” in favor of a path to citizenship, up from 61 percent who said “yes” seven years before. Among those who attend worship at least weekly, 82 percent were in favor.

Evangelicals by a wide majority and across all ethnicities said they would support bipartisan immigration reform, defined as increasing border security and establishing a process for undocumented immigrants to apply for citizenship if they paid a fine, passed a criminal background check, and completed other requirements (a path to citizenship similar to the one supported by the US Conference of Catholic Bishops).

A higher percentage of evangelicals also cited the Bible as their top influence on their immigration views compared to 2015, although it is still in third place after “friends and family” and “the media.”

“I’ve had that Pew stat thrown at me lots of times,’” said Matthew Soerens, the US director of church mobilization and advocacy for World Relief. World Relief and the Evangelical Immigration Table commissioned the Lifeway survey in 2015 and 2022. He never felt like that low number matched up with the evangelical support for refugees he saw in his work.

In the question this year, the Lifeway researchers decided to include a definition of a refugee under US law: “someone fleeing persecution due to specific factors such as their race, religion, or political opinion.”

Other data would support a shift in evangelical attitudes. World Relief, the humanitarian arm of the National Association of Evangelicals, is one of the approved refugee resettlement agencies for the US government. During the chaotic August evacuation from Afghanistan last year, the organization gained 3,000 new donors, a 1,500 percent increase over the same period the previous year.

That outpouring from individuals and churches for domestic refugee and immigration ministry continued after the Afghan evacuation. Giving for the fiscal year which ended September 30, 2021, was double that of 2020. So far this fiscal year, its giving for domestic ministries has surpassed that 2021 number.

“I would hope it has to do with learning and faithful witness over time,” said Jeren Rowell, the president of Nazarene Theological Seminary in Kansas City, Missouri. This week the seminary hosted an immigration event for pastors, with presentations from a Ugandan who had been tortured for his political views and fled to the US for asylum as well as from Flores, the Dreamer. Rowell added that people’s attention has shifted away from immigration too, which may help lower the temperature of the conversation about it.

Soerens thinks that the welcome of Afghan and Ukrainian refugees to the US this past year had a lot to do with more welcoming views on refugees. He noted that there is currently not negative news coverage on refugees like there was with Syrian refugees.

“I think the Afghanistan crisis helped a number of conservative people understand how difficult our immigration system is,” said Soerens.

Christians trying to help desperate Afghans escape often found no solution, even if they knew Afghans met strict qualifications for visas. Now Soerens said more people might understand that the trouble for Afghans is “true for other nationalities as well.”

On immigration too, Soerens used to hear questions during his church visits about immigrants taking jobs from Americans, but he hasn’t heard that kind of question in a long time. “We can’t find enough people to do all the jobs in this country,” he said. The survey supported that anecdote, with fewer self-identified evangelicals saying they saw immigrants as a drain on economic resources than in 2015.

Flores was born in Mexico, but her undocumented parents brought her to the United States when she was just a few years old. Her dad picked peaches in South Carolina, and her mom moved to Kansas City, Kansas, where she grew up.

When Flores was a teenager, the Obama administration introduced the Deferred Action for Childhood Arrivals (DACA) program which allowed people like Flores, Dreamers, to receive work permits and protection from deportation. It allowed her to go to college and then to work, though she remains in uncertainty. Every two years she files fingerprints, paperwork, and does background checks to renew her DACA status.

Dreamers do not currently have a path to permanent legal status in the US, though most Americans support them staying. A 2020 survey from Politico/MorningConsult, showed 72 percent of evangelicals said Dreamers should be allowed to stay in the country. Measures to resolve their status have stalled in Congress.

Flores remains anxious about her status in the only country she knows, but she is focusing her attention working at her church, Mission Adelante, in Kansas City. She was raised nominally Catholic but became evangelical after going to the youth group at Mission Adelante as a teenager.

Last October when she spoke at a suburban evangelical church doing an immigration workshop, she told her story to the room. The experience was “tough,” she said because the audience “had already a negative connotation of what DACA was, or who Dreamers were,” she said. During the question-and-answer time, she had to go into detail about how she paid taxes and health insurance.

“It was definitely vulnerable for me to share all of that,” Flores said. One person asked about whether her parents were still around, their immigration status, and whether they were working, which made her nervous. “I didn’t want to put my parents in a position to get hurt.”

But though the event felt a little hostile, afterward she had one older man reach out and tell her that he was honored to hear her story and that it helped him understand what it was like to be a Dreamer. Another man from the event started volunteering with her ministry.

“It was new for him to go over to my side of town, to be around the kids in my community,” she said. “It helps you see a face to something. Usually, we read something or hear about something, and we’ll dismiss it.”

Evangelicals’ views historically go back and forth

Ulrike Elisabeth Stockhausen, in the 2021 bookThe Strangers in Our Midst: American Evangelicals and Immigration from the Cold War to the 21st Century, notes the “complex and at times contradictory attitudes that evangelicals have espoused on undocumented immigrants and refugees” in the decades since World War II.

Evangelicals provided the infrastructure and volunteers for refugee resettlement from those fleeing communism in the 1960s, 1970s, and 1980s, welcoming Cubans to Soviet refugees. They supported legalization for undocumented immigrants in the 1986 law signed by President Ronald Reagan, the Immigration Reform and Control Act. But they became more hardline about illegal immigration in the 1990s.

In 2012, evangelical leaders from a wide range of groups including conservative ones like Focus on the Family, signed a statement of support for immigration reform, that included respecting the dignity of immigrants, the rule of law, border security, and establishing a path to citizenship.

But immigration reform has stalled over and over. World Relief is tracking some smaller policy changes that may come up this Congress, like a bipartisan bill on legal status for temporary farm workers.

For more than a decade, Soerens has traveled the country to do events at churches on immigration. Because the church attendance of self-identified evangelicals has been decreasing, especially after the pandemic, he worried that the 2022 numbers on evangelical attitudes toward immigrants might be worse than 2015. But after seeing the survey, and in particular the growth of influence of the Bible in evangelical views on immigration, he was encouraged.

“I’m not satisfied with it … but I told my wife, ‘I feel like the last 10 years of my life have not been totally in vain,’” he said.

That new breakdown between belief and self-identity helped show significant differences. More evangelicals by belief saw new immigrants as an opportunity for evangelism than did self-identified evangelicals.